Series-I Land Rover cars were introduced to Darjeeling by the British sahibs in the 1950s. Probably the best four-wheel drive car of its time, the Land Rovers were very effective in tackling high altitude regions where roads are not often paved and the gradient is also very steep. Normal cars could not be operated in those steep gravel roads and these Land Rovers came very handy for the British administrators and particularly the tea-planters. After the independence of India, some of the tea planters chose to stay back, and Land Rovers continued to be in use. Later, they were introduced as the means of public transportations all over the Darjeeling district and they served that purpose for nearly 3 decades. However, with the advent of modern cars towards the end of 1980s, the use of these decades old Land Rovers as public taxis gradually phased out in the Darjeeling town and its immediate surroundings. But they still continue to operate in the Manebhanjan to Sandakphu / Phalut route where more than half of the road is still not paved and the gradient very steep.

The series-I Land Rover car which was manufactured by an English automobile company called the Rover Motor Company around the Second World War are no longer in production. They cannot be seen in operation in any other part of the world nowadays but in some museums. However, in these parts of Darjeeling the Land Rovers are not just in running condition but they are actually the lifeline of the people of several villages like Manebhanjang (also spelt Maney Bhanjyang), Chitrey, Lama Dhura, Meghma, Tonglu and Tumling, Gairibas, Kalipokhri, Bikhey Bhanjyang and so on, apart from Sandakphu and Phalut. These quaint and remote villages are situated alongside the road that goes all the up to Sandakphu and Phalut from Manebhanjyang, where tourism is one of the major ways of income. Many tourists and history enthusiasts still flock to Maney Bhanjyang only to take a heritage ride in the series-I Land Rover cars up to Sandakphu (they can also be booked up to Tonglu and Tumling, though most peoples prefer to go all the way up to Sandakphu due to the mesmerizing views of Mount Kanchenjunga from there). As the Land Rovers transport all these tourists, they significantly boost tourism in those areas and help the villagers sustain their lives in the harsh living conditions of high altitudes. These cars also carry rations and goods required for day to day lives in the higher altitudes from Maney Bhanjyang. In the photograph below you can see a Land Rover car waiting outside a small eatery at Tumling. 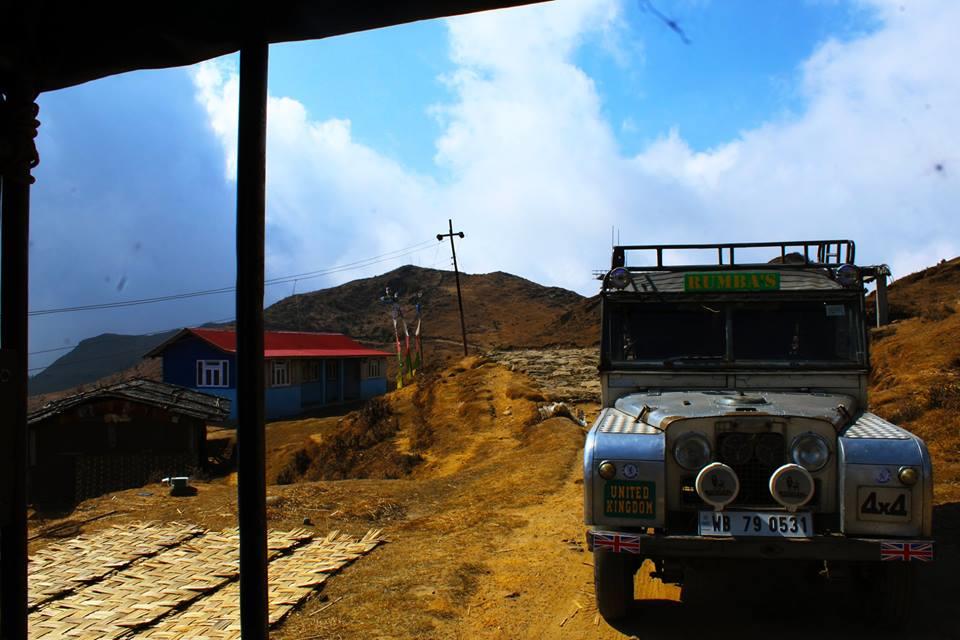 How to book a car ride in Land Rover to Sandakphu?

As stated above, at present Land Rovers are only operational between Maney Bhanjyang and Sandakphu. There is a taxi association at Mane Bhanjang where you can book a Land Rover up to Tonglu-Tumling, or Sandakphu, or Phalut. The association is called the Singalila Land Rover Association. In fact if you want to visit Sandakphu by car, avoiding the difficulties of trekking, then perhaps the only way is to book a Land Rover. Earlier self-driven motorbikes were allowed in that route but they are no longer allowed because of the noise they create and the subsequent disturbance they create for the wildlife of the Singalila National Park that lies en route. Technically, self-driven cars are allowed to go to Sandakphu only upon obtaining prior permission of the Singalila Land Rover Association, but practically that is almost impossible to get. After all, why would they allow you to go in your own car and thus harm their own business?

The booking counter of the Land Rover which is also the office of the Association is located right at the main market area of Maney Bhanjyang. As it is a very small town (or you can call it a big village), it is very easy to located the office of the Association. If you still do not find it, ask someone for Hotel Pradhan, locally known as Master Ji's hotel. Master Ji alias Mr. Jeevan Chhetri was the headmaster of the local school and now runs a small hotel in his own house, hence this name. Most people who come from Siliguri, Mirik, or Darjeeling and want to travel to Sandakphu usually halt for one night at Maney Bhanjyang, which is very much recommended for acclimatization. If you stay there, you can book the vehicle on the previous evening. Or you can book it in the morning of your journey day as well, but there might be high demands in peak tourist seasons. The fare chart by the Singalila Land Rover Association is given below.

What is the future of Land Rovers in Darjeeling?

The future of the heritage series-I Land Rover cars in Darjeeling are definitely at stake because although most of these cars are in working condition, their spare parts are no longer available. Hence, even if a small part goes astray, the entire car becomes useless. Thus, where even a few decades ago around sixty such cars were operational, nowadays the number has reduced to around forty. Also, questions are arising whether these age-old, nearly dilapidated cars are fit to carry passengers to high altitude destinations? There was an order by the District Magistrate of Darjeeling to ban the Land Rovers in the Sandakphu route. Although they are very hardy cars they are very old and do not have permits to ply as taxis or public transportation cars. Efforts are being made to turn gravel roads into normal paved roads as soon as possible and plans are there to replace these age old vehicles with modern wheel drive cars that are much safer.

So what about the Land Rovers? Is it the end of them? The good news is that there are plans to start a heritage tourism circuit in comparatively flatter terrains like Mirik or Darjeeling where the mid-twentieth century atmosphere may be recreated. Land Rovers can therefore be used as heritage rides for tourists instead of journeying on steep, risky roads.

Note: The photograph is my own, copyrighted work and are not to be reproduced.

Tourism: A visit to the hill station, Darjeeling

Darjeeling is located at a height of 2185 metres above sea level. It is known as the Queen of Hills. The beauty of Darjeeling is incomparable. Kanchanjunga, the world's 3rd highest mountain peak located in the Himalayan range provides a magnificient view from Darjeeling at sunset and sunrise. The serenity of the Darjeeling's natural beauty is a solace to the nature lovers.

Darjeeling has much more to offer other than views of snowy peaks, undulating tea gardens, and the toy train. It is a great milieu of several cuisines. If you are a food lover, here is a list of top cheap eateries in Darjeeling where you can have a sumptuous meal at throwaway prices!

Planning a tour to Darjeeling? The town has much more to offer to the tourists apart from tea gardens, monasteries, and the Darjeeling Himalayan Railways. Visit Darjeeling's top museum and catch a glimpse of its history, heritage, culture, religion, language, flora and fauna, and much more!

3 famous monasteries in Darjeeling you should visit

Darjeeling, the Queen of Himalayas, is not only famous for the Darjeeling Himalayan Railway, undulating lush green tea gardens, and snowy mountain peaks. The town is also the abode of several Buddhists monasteries, mostly Tibetan. They exhibit the rich religious heritage of Tibetan Buddhism and are must-visit destinations for the inquisitive traveller.

More articles: Darjeeling Tourist Guide Car Car Car How to How to Darjeeling

An excellent sketch on the terrain in that part of the country and equally good coverage on the Land Rover cars.

What I feel is these cars are to be replaced by new generation high power cars. Only thing is that the State Govt should devise some scheme where these car owners or drivers are benefitted by that and they agree to replace their old car with the new one. These people might not be able to afford new powerful cars as cost is s factor for them. They are somehow making their livelihood with this age-old arrangement. The State Govt can launch some promotional scheme for the development of tourism in this picturesque part of the country and by including new powerful vehicles. The safety factor will also be addressed as these old cars have already seen their days and it is a risky proposition to have them in action.

Thank you for your comments, Mr Umesh. Yes the state government is offering loans in easy terms to the existing Land Rover owners to procure new cars like Mahindra Bollero under the 'Gatidhara' scheme of the State Government of West Bengal. It is a vehicle loan with easy repayment terms and less interest usually issued to the unemployed or underemployed.