Chennai is reeling under a severe heatwave, that is an understatement. The city is facing a significant crisis. All her water resources have run dry; it's depressing to see images of the dry lakebeds featured in the morning newspaper, a daily reminder that the worst is yet to come. The cracked soil foretells a dismal future.

I've stopped my evening walks because the heat is unbearable. The sea breeze that famously cools the city is not blowing. All I can feel is hot, humid air, slapping against my skin, scorching it. Never before have I experienced such warm breeze, in Chennai, during my evening walks. It is like the loo that hits Delhi and the rest of the Northern Plains during the summer months.

Everyone I speak to is worried, and with no sign of rain, we can only hope that the groundwater sustains us until the northeast monsoon arrives. The mercury is soaring and is a couple of notches higher than the average June temperature. The other the day an article in the papers stated that the city is heading to set a record, not something to look forward. It's been 193 days since it rained here, it mentioned, and that was four days ago, so it's 197 days without rain; which means that Chennai and its suburbs have been without rain for more than half a year. And the showers weren't good during the time before that period.

The onset of the monsoons

The irony is that the Indian Meteorological Department (IMD) has announced the onset of the monsoon and the rest of the country is perhaps celebrating its arrival. The southwest monsoon that usually arrives in the first week of June brings rain to the entire country, but it ditches Chennai. This year won't be any different, the monsoon will once again dodge Chennai, and she will continue to feel the scorching heat and thirst for water.

The role of the Western Ghats

The Western Ghats are the reason why Chennai doesn't get much rain during the southwest monsoon. The Ghats prevent the monsoon from reaching Chennai. The lofty mountains stand like sentinels blocking the path of the moisture-laden clouds that can drench the parched city if they can reach her. Unfortunately, for the city and the rest of the state, the rain-soaked clouds collide with the hills in the Ghats and disperse all the rain over Kerala, leaving the dry, blistering winds to fan over Chennai. The heat and humidity rise to insufferable levels.

With no rains for the past six months, and very little rain in the months preceding those months, Chennai is tackling a severe water crisis. Residences and commercial establishments that used to receive water from the Chennai Metro Water now stare at dry taps. People have resorted to buying tanker water, sourced from the outskirts of the city, particularly OMR.

The problem is that the groundwater level in OMR has also fallen drastically. In my residential complex, which is surrounded by several natural lakes, (all of which are now bone dry) the water table is down to dangerous levels. The wells are running dry, and we are making desperate attempts to find water, with little success.

The plight of Tamil Nadu and Ladakh

The southwest monsoon embraces the entire country; it brings showers all over India, except for Tamil Nadu in the South and Ladakh in Jammu and Kashmir. Ladakh receives very little rainfall annually and remains a dry cold desert. The mighty Himalayas block the rain clouds from crossing over to Ladakh. Tamil Nadu, on the other hand, receives a fair amount of rainfall, but most of it arrives between October and December when the northeast monsoon sets in. Tamil Nadu is blessed in that way when compared to Ladakh – the latter receives around 100 mm rain each year, as compared to more than 1380 mm rainfall that falls in the southern state.

Reports show that Tamil Nadu receives over 60% of its rainfall during October and December, with the onset of the northeast monsoon. This is also the time when cyclones hit the coastal regions of Tamil Nadu and the neighbouring states. Cyclones bring in the rain, but they also cause destruction. The northeast monsoon is also not as predictable as the southwest monsoon. Rains, as mentioned, are mostly due to the depression in the Bay of Bengal and rains, are concentrated during the period of the cyclonic storms. The rains last for a few days unlike a full season of rain that happens with the southwest monsoon.


The Monsoon Season in India

The monsoon season in India lasts from June to September when the southwest monsoon brings rains. The monsoon generally keeps its date with Kerala, arriving on the first of June, each year. This year it was late by a week.

After it reaches the coast of Kerala, it advances, moving inland, covering the rest of the country, distributing heavy rainfall, as it progresses. Tamil Nadu manages to get some rain, from the clouds that can cross over the Ghats. However, the amount of rain the state receives is insignificant as compared to what the other parts of the country.

An analysis of rain distribution

Here is a comparison of rainfall during the monsoon in parts of Kerala and Tamil Nadu. The difference is stark. For instance, Alappuzha in Kerala and Pamban Island in Rameswaram, in Tamil Nadu lie on the same latitude, but the former receives approximately 186 cm of rain during this period while Pamban receives a mere 10% of that. Likewise, Mangaluru in the state of Karnataka receives approximately 300 cm of rain during the southwest monsoon while Chennai, which is also on the same latitude receives just 45 cm of rainfall.

The little rain that Chennai receives is a godsend because it gives respite from the heat and temporarily resolves the water woes. Experts opine that this year's southwest monsoon will bring near-normal rain, but it will not be enough to tide through the severe water shortage that the city is facing. Near normal monsoon is an ambiguous term; you don't know what to expect. So, while Chennaites look at the skies and hope for the rain clouds to darken the heavens, the impact of the rain, when it arrives will not be much. Hopefully, there is more rain in August. 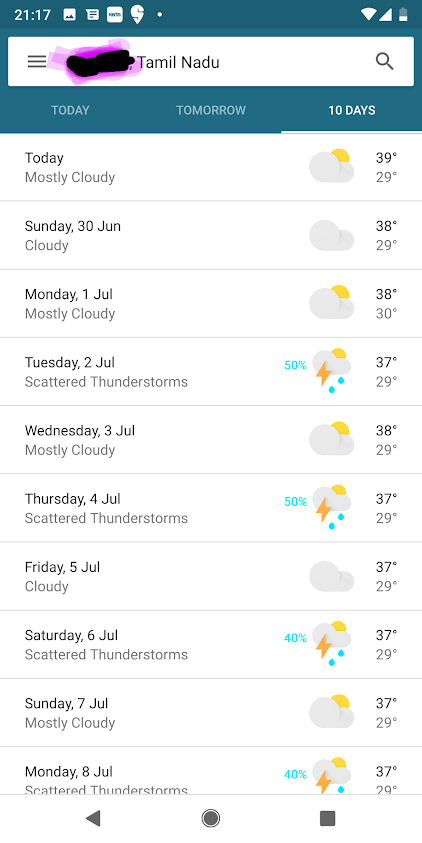 Weather forecast for the next 10 days

The delay in the southwest monsoon is a setback. The newspaper says that the "monsoon makes the slowest progress in 12 years" – (TOI). The report states that cyclone Vayu affected the course of the monsoon, which is why it is slow to reach the interior parts of the country. The slow-moving monsoon has already created a deficit in the amount of rainfall that the country, as a whole, should have received by this time.

Weather is unpredictable, but the IMD has made predictions that this year's monsoon will bring a breather to Chennai, but will the rain be sufficient is the question. The state is reeling under drought-like conditions, as is over 40% of the Indian sub-continent. However, the weather forecast provided by the IMD looks encouraging. 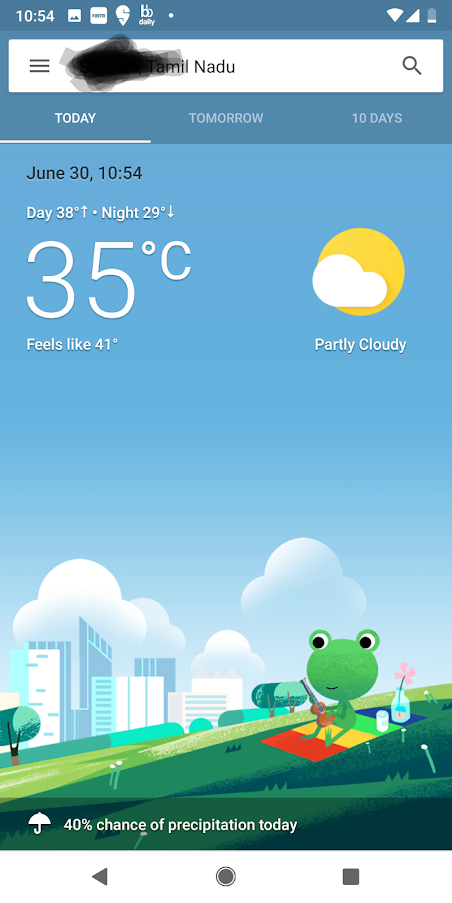 The mercury soars during May and June, and these are the hottest months in Tamil Nadu. Temperatures usually cross the 40°C mark, especially in June, but it feels hotter because of the dry weather and the high humidity levels. Chennai normally experiences an average temperature of 37°C during peak summer months. That is a decent temperature when compared to the Northern Plains that cross the 40°C mark. The heat in Chennai becomes unbearable because the humidity levels reach extremely high levels.

The sea breeze that cools down the coastal areas of the southern state gets subdued by the more powerful westerlies that carry hot air. During normal conditions the sea-breeze sets in just before noon and brings relief from the heat, but in June the temperatures remain high because of the westerlies overshadowing the sea-breeze, resulting in long, hot and humid days, with no respite in sight.

There has been deficit rainfall in the last two consecutive years, with the northeast monsoon failing in 2017 and 2018, and neither was the southwest monsoon good in these years. Four major reservoirs that supply water to the city are virtually dry. These are the Chembarambakkam lake, Puzhal Aeri, Cholavaram aeri and Poondi lake. The Chennai Metro Water is now exploring abandoned quarries across the city to source water from, that is how severe the crisis is. Let's hope and pray for a good monsoon.

My HR Interview with Keane, Chennai

Are you looking for Interview experience? Then read this article to know and prepare yourself for an interview.

Read this one for Marina Beach detail, tourist place in Chennai. The best places to visit in Chennai, India.

Karnataka is famous for Arts. Belur Chennakasava Temple in Hassan District of Karnataka is an example of its Sculpture.

Appreciation to the author for taking up this great subject as every year Chennai has been experiencing water shortage and this crisis is taken very lightly by successive governments. Such is the condition this time that the scarcity of water has to be addressed by augmenting special goods trains to carry water from other states. The lakes which were the source of water were made to shrink, thanks to the real estate surge with the help of leaders in power. Nevertheless this problem has to be taken up at the national level and treated as national calamity so that people should be ensured with uninterrupted water supply from various sources.

It is an excellent article on the water crisis in Chennai. I want to add some facts which often remains behind the curtain. It is quite a natural factor that rain has not wetted the lands of Chennai enough this year because of which the ground water level has gone down leading to water scarcity. But one would also think that how did the water conservation program, that is, the water reserve in Chennai was not able to fulfil the thirst of people of the area. This could be a topic for debate but more importantly, it should be fixed before any other similar situation arises.