The first time I had dal kebabs was when I was teaching in Lucknow. I was a residential staff at one of the most reputed schools in the city. One of my student's mother (who was also a friend) once sent me a box full of lovely kebabs. The flavourful, melt in the mouth kebabs were delicious, and were devoured in no time by the other teachers. However, none of us could identify the main ingredient in those kebabs.

Later in the day when I called the lady to thank her, she revealed that the secret ingredient was masoor dal. I hadn't heard of dal kebabs, and until then the only kebabs that I knew were made from different kinds of meat.

She sent me the recipe the next day. Back in those days, I didn't do much cooking. I had an electric heater in my unit, over which I'd at times rustle up something to eat. The facility provided wholesome meals, so there was no real need to cook. I remember keeping the recipe safely but soon forgot about it. Years later, I found the recipe in-between the pages of one of my books. I made the kebabs the very next day. I remember it had been raining all day, and a university friend of my brother's had come over. The kebabs were served as a snack and were appreciated. My brother's friend, a vegetarian by choice, took the recipe from me — the original method used just masoor dal, carrots and radish. I add a mixture of dals. Sharing my own version of the dal kebab. 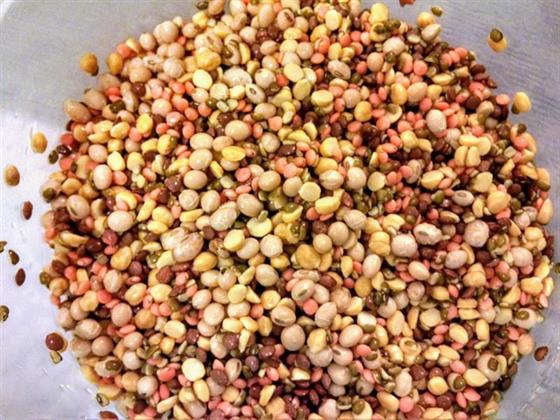 Soak the dals overnight, or for at least 6 hours. Wash, drain and boil them in a pressure cooker, for one whistle. Let the cooker release its pressure on its own. Allow the dals the sit in the water and cool on their own. Once cool, drain the water and grind the dals to a soft paste.

Meanwhile, peel and grate the carrots and radish. Wash and chop spinach into small pieces. Chop chillies finely, as also the mint and coriander leaves. Peel and dice the onion into little bits. 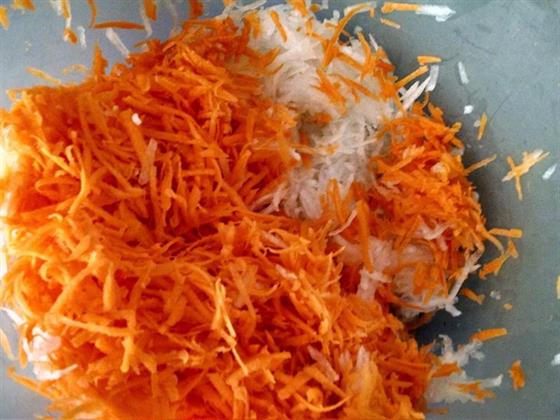 Press the grated carrots and radish between your palms and squeeze out the juices from them. This step is crucial; make sure to squeeze out as much liquid as you can.

Tip: Keep aside the water used for boiling the dals and also the squeezed-out juices from the radish and carrots. These are rich in nutrients. Put them to use – 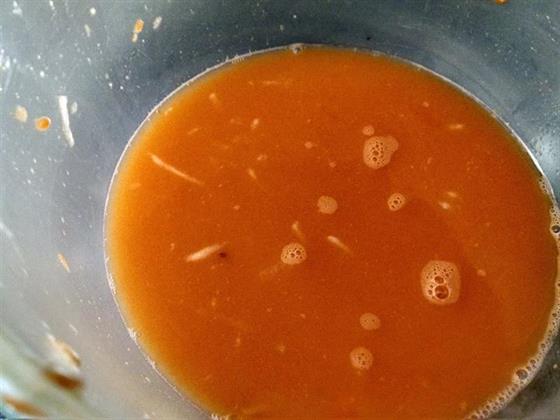 Mix all the ingredients, except the salt, and set aside. Refrigerate the mixture if it is too moist. You want a slightly firm mush. Add salt to the preparation, just before frying the kebabs. Doing so will keep the veggies from releasing water.

Pour a little oil or ghee in a frying pan and allow it to heat. Simultaneously, take lemon-sized portions of the mixture and shape them into kebabs (a flat disc). Slowly slide the kebabs into the pan, maintaining a distance between them so that they don't touch each other. Doing so allows proper cooking of the kebabs, especially along the edges.

Keep the flame on medium, and in about 3-4 minutes, flip the kebabs and fry the other side, and flip them over once again after another 3-4 minutes. This trick traps the moisture inside the kebab, so it gets cooked, but remains moist. Fry the kebab on both sides, until they take a beautiful golden hue. If required, add more oil to the pan.

Remove the kebabs on a serving platter and serve with your choice of dip or chutney. Relish the kebabs as they are, or enjoy them with a mint-coriander chutney, or tamarind chutney, a hung curd dip or even ketchup.

It is a flexible recipe; you can add or delete ingredients without compromising on taste, texture or nutrition. I recommend adding a variety of vegetables, such as finely chopped beans or dill leaves, grated beetroot and cabbage and even peas. The more vegetables you add to the mixture, the more its nutritional quotient will improve. Try the dish with sprouted dals, but don't boil them. Kabuli channa, black channa and even rajma add flavour and texture to them.

Flavouring the kebabs with spices, ajwain and jeera are an excellent choice. You may also add chilli flakes and dry crushed garlic to the mixture. Stuff them with nuts, seeds or raisins to give them a gourmet food feel. Alternatively, use paneer and cheese for a melt in the mouth experience. Experiment with ingredients, flavours and textures. 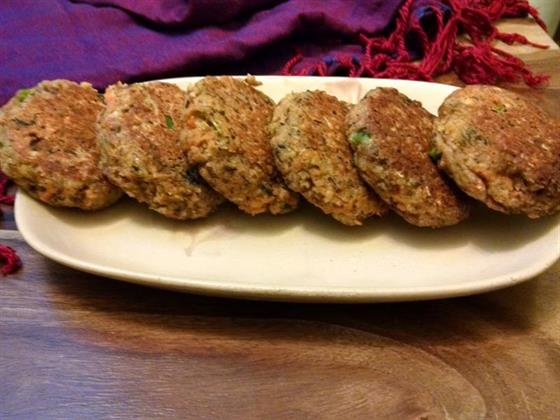 Serve as a snack or main course

The kebabs make a delectable snack. Cut down on the size if you intend to serve them as finger food at a party. Shape them into balls, and deep fry them. And as an extra measure, roll them in a mixture of semolina or sesame seeds, before frying them.

They can be packed in a child's tiffin box or served as an after-play snack. Flatten them and use as a filling for a sandwich. Serve them as an accompaniment with your main meal.

Dals, beans, pulses and legumes have the most protein among all plant-derived foods. Serve these kebabs to growing children to meet their protein requirement. Dals are nutritious; they are a good source of iron, zinc, potassium and other trace minerals. They provide B vitamins and complex carbohydrates, which are required for bodily functions and as a source of energy. Maintain good health by eating them at every age.

Most dals have a high content of soluble fibre, which is known to keep arteries clean, the heart healthy and cholesterol in check. They also have high levels of phytochemicals that can help fight diseases. The complex carbs present in them make them good food for diabetic patients. They are generally low in calories, and so are perfect for a weight-watchers diet.

Some dals may cause flatulence and bloat. Avoid this by adding saunf, jeera and ajwain and crushed pepper to the preparation.

Carrots are a low-calorie vegetable, rich in beta-carotene and potassium. They maintain lustrous hair, glowing and healthy eyesight and keep the mucous membranes functioning correctly. They are loaded with fibre and are heart-friendly, lower cholesterol and prevent plaque from clogging the arteries.

Radish is another low-calorie root vegetable. Most people don't like it because of its sharp, pungent taste and flatulence causing property. Nevertheless, they are beneficial to you. Their rich fibre content makes them a healthful food. Apart from that, they provide a fair amount of vitamin C, potassium, iron and folate. 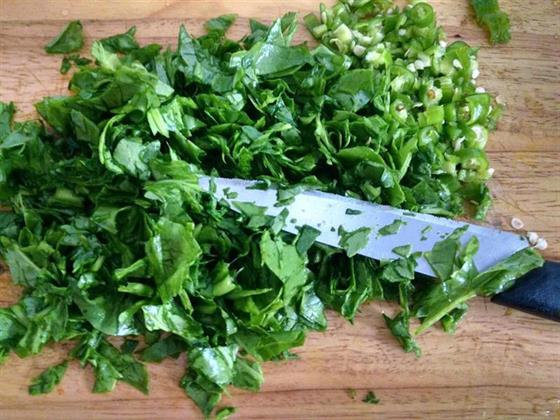 Spinach contains vitamins A, B2, B6, K and is rich in the mineral potassium. Spinach also has bioflavonoids and antioxidants, which are valuable nutrients. However, spinach can interfere with the absorption of calcium and iron in the body. It can also cause the formation of stones in the bladder and kidneys.

This is an easy way to make fussy children eat healthy foods. The dal kebabs are packed with nutrition. Will you try these?

This article deals with the preparation of the most popular vegetable recipe of north India, especially of Punjab. It is called ‘Sarson ka saag’. This is prepared from the stems and leaves of mustard plants which are commonly grown in Punjab in the months of October and November. This preparation is usually eaten with fresh butter and Makai ki roti (chapatti or roti made by kneading maize flour). This is the most delicious and nutritious recipe of north India. This is the most favourite dish of Punjabis.

Do you like to eat sweets? Do you like to prepare sweets by yourself? If yes, here you have the recipe to make a special halwa and a special gulab jamun. All of you may have heard of halwas made of various ingredients like grain flour, sunflower seeds, various nuts, beans, lentils, carrots, pumpkins etc. But, do you know that halwas can be made of bread? Similarly using bread, we can also make gulab jamun. Here is the recipe to prepare a special bread halwa and a special bread gulab jamun.

This article will explain the ingredients required and the making of Chocolate Custard step by step. This article will finish with the time estimation. All over this is a tasty and delicious recipe which is healthy while added with fruits.

“Kofta” is one of the best dish which normally we prefer to add in our party’s menu. We normally cook malai kofta, lauki kofta very often. In this article I am sharing a delicious recipe of “Eggs kofta." I am sure this is a good option for nov vegetarian.