: Onam is considered as the New year for Keralites or Malayalee's, celebrated in Chingam, the first month in kola varsham (Malayalam calendar). It also marks the time for the first harvest of rice, spices, etc. Though it is a Hindu festival, it is now regarded as the state festival of Kerala and every Keralite, irrespective of caste, creed and faith celebrate it with great excitement.

Onam is derived from the Sanskrit work Shraavana which refers to the 27 nakshatras or constellations. In Kerala or south India, Thiru is associated with Lord Vishnu and thus, Thiruonam. It is believed to be the nakshatra of Lord Vishnu who sent King Mahabali to the world beneath (Hell) by pressing him by his feet.
According to belief, Onam festival is celebrated to welcome King Mahabalis spirit as he visits Kerala, his former kingdom at this time every year. The celebration lasts for ten days while few celebrate it up to 12 days. It starts from Atham the 1st day of Onam, Chithira, Chodhi, Vishakam, Anizham, Triketa, Moolam, Pooradam, Utradam and Thiruonam (10th day-main celebration), Avvittom and Chadhayam (12th day).

According to Hindu beliefs, King Mahabali (great-grandson of demonic ruler Hiranya Kashyap and grandson of Prahalad) was the ruler of Kerala and a devout worshipper of Lord Vishnu. He came to power by defeating the devas (deva log) and took over the three worlds (Sky, Earth and below). He was a sincere, honest and just ruler. There was no misery, poverty, scarcity or disease in his kingdom. The King had great ego and upon request by the devas due to his popularity, Lord Vishnu came to earth in the avatar of a young dwarf brahmin boy, named Vamana (5th avatar of Lord Vishnu) to eradicate his devotee (Mahabali) of his sin/ego.

Mahabali offered whatsoever he asked for to the brahmin boy. The boy replied that one must not pursue more than one wants and all he needed was mere 3 footsteps/paces of land. Out of his egotism, he agreed. Lord Vishnu came to his original avatar and became gigantic. By his first feet, he covered the entire earth, the second covered the heaven and asked Mahabali, where to keep his third feet. As the King was a man of principle and devotee of Lord Vishnu, he offered his head for the third step. Lord Vishnu places his 3rd step and sends the king to the world below (Hell). This released the King from the recurrent cycle of rebirth and granted him a blessing for his deep devotion towards Lord Vishnu, by allowing him to visit his people once, every year and it is the Thiruonam day when King Mahabali visits his people.

People celebrate it in numerous ways. The rituals associated with the celebrations are given below in short for your reference.

i. Pookalam (Flower carpet) –i. Pookalam (Flower carpet/Rangoli) – It is a colourful arrangement of fresh flowers and leaves laid on the floor. Poo means flower and kalam means drawing/artwork on floor thus it is called pookalam. As it is put on the first day of Onam, i.e. on Atham, it is also referred to as "Athapoo". With each surpassing day, a new film of flowers is added to the pookalam. The circle of flower increases every day, as each day a new circle is added to the earlier one. Thus, you may find 10 circles (Atham to Thiruonam) in the pookalam. It is to welcome King Mahabali during his yearly visit. Each circle represents the 10 deities (Ganesha, Shakti, Shiva, Brahma, Pancha Boothanangal, Murugan, Guru, Ashta Digpalakar, Indira and Vishnu) in the Hindu assemblage and nakshatras. It is like Rangolis (North India) or Kolam (Tamil Nadu) drawn by other state people during their festivals. Many keep pookalam competitions. Some of the flowers used for making the pookalam are Thumba, Mukkutti, Thulasi, Cheti, Jemanthi, Kadali, Mandharam, Shankupuashpam, Konginipoo and Chembarathi. On the 7th day of Onam i.e. on Moolam, the shape of pookalam is square or is given a unique shape at the 4 corners by using leaves, etc. 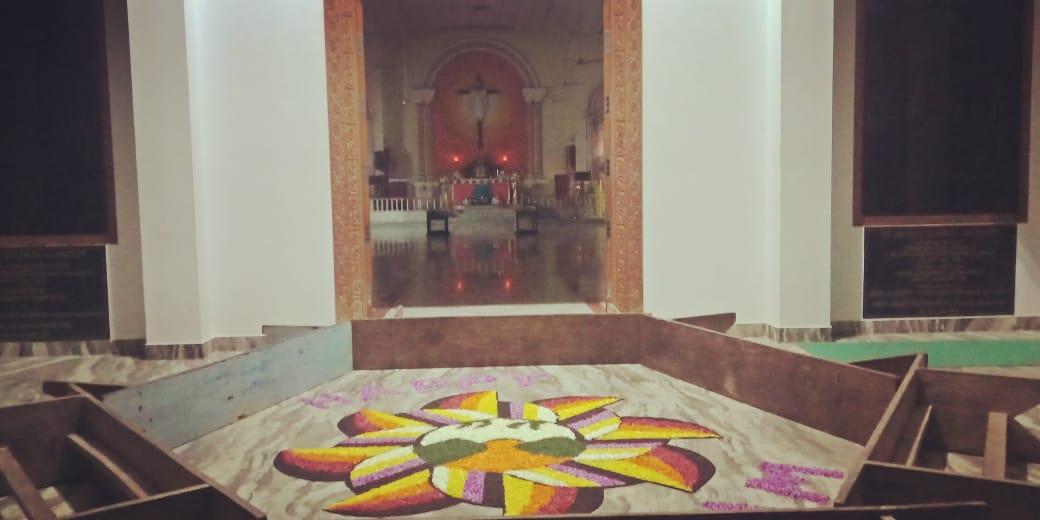 Image source: from our own group

ii. Puli Kali (Pulikkettikali)- This is a folk art performed by artists that exhibit hunting and hide & seek activities of a Tiger. The bodies of men are painted as tigers and generates excitement to both performers and spectators. It is believed that this was introduced by King Ramana. This art is generally organized in Thrissur district which is the cultural district of Kerala. 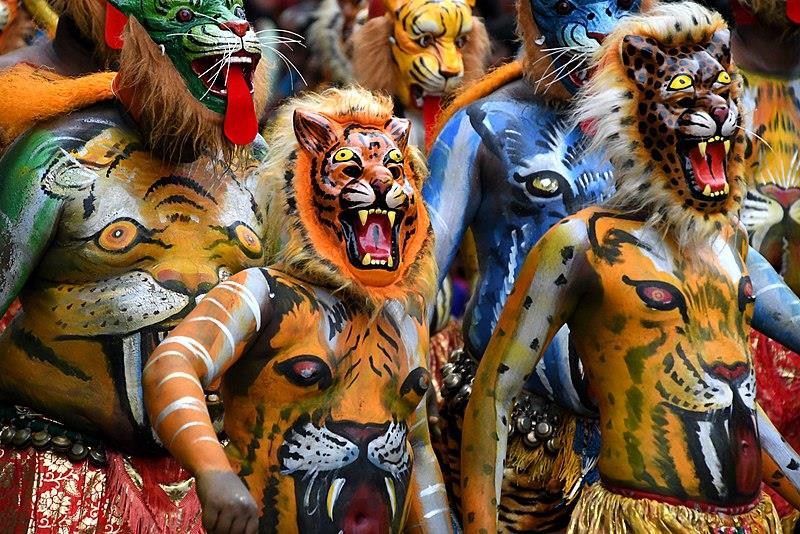 iii. Vadam Vali (Tug-of-War) – These are conducted in colleges, societies or communities as small competitions between teams or groups. A team may be boys, girls etc. as per the organizers. For Onam, the team may consist of more members but for a competition, it is between 8-10 members in a team. The team must pull the rope towards them with the rope tied below the arms, and the rope should not touch the ground or locking of the rope is not allowed.

iv. Ona-kodi or Ona-pudava- It is a combination of two words, Ona means Onam and Kodi or pudava meaning New clothes; thus the elders give or buy new clothes for young ones in the family and gets its name as Onakodi or Ona-pudava. These are traditional clothes, like Kerala saree (Kasavu saree), set mundu, pattu pavada & blouse for women and Kasavu mundu and shirts/kurta for men. Now a days, even modern dresses are bought as per their choice and convenience.

v. Vallam Kali (Boat Race) – > It is called the snake boat race and often held few days before Thiruonam. Many big decorated boats (Vallam) participates in the race. Each boat has hundreds of boatmen/ore men for the race. Each have their own dress code, song and music which are eye-catching and soothing to the ears. The renowned competitions are the Nehru trophy and Aranmulla Uthrattadhi boat race. 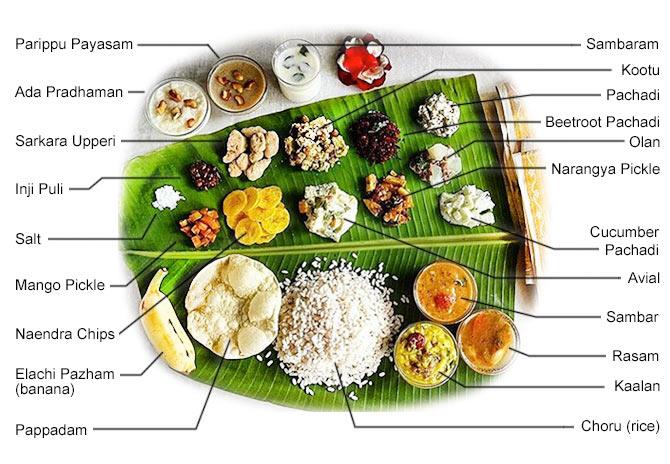 vii. Ona-thappan – It is a clay pyramid structure with 4 faces and flat top symbolizing Thrikkakara Appan (Lord Vishnu and his 3 feet). It is the representation of King Mahabali visiting the state every year, a way of showing care for his land and people. It is placed in the centre of the pookalam (Floral Rangoli). This will be submersed in the nearby river after Thiruonam or after 10 days of celebration. It marks the descent of Mahabali to the world below.

In many temples, a palmyra tree is erected in front of temples and the tree is surrounded with wooden guardrails and covered with dry leaves. The tree is set on fire with a torch and burned to ashes on the Avvittom (next day of Thiruonam). It signifies the return of Mahabali to below world (Hell/Padhalam) as his sacrifice and victory over evil.

viii. Kaikotti kali (Thiruvathira kali) – It is a folk dance performed in a group by the young teenage girls. It can be a small or large group performed in a circle formation moving in a clockwise, anti-clockwise direction gracefully. They make co-ordinations with their hands, claps and movements. In the centre of the circle is the pookalam (Flower Rangoli) with a traditional brass lamp lit and kept. It is done in the traditional Kerala avatar (Gold border set mundu and neriyathu) with hair tied as a bun with a jasmine garland around the bun.

ix. Tumbi Thullal – This is another popular folk dance performed by 6-7 women. It is performed in a circle. The leader sits in the centre and initiates the song and it is sung by others in sequence. The circle formation is accompanied with rhythmic clapping and body moments.

x. Ona-thallu (Avittathallu/Kayyamkali) – It is traditional bare-fist wrestling or friendly trashing or fighting celebrated by the Nair community of Pallassena desham in Chittur Thaluk of Palakkad. There is a 14-diameter circle drawn known as atta-kalam and there are two teams. A member from each team enters the circle, and the game stops only when the player is thrown out of the circle or kalam.

xi. Ona-villu (Bow-Arrow) – It is the flat, red-painted, tapering wooden bow, also called Pallivillu. It is a traditional bow offered to deity Sree Padmanabhaswamy ahead of Onam. These are made by the traditional manufacturers, the Valayiyaveedu Family of Melarannur in Thiruvanthapuram. It comes in 6 versions; The 4.5 feet long – Anantha-sayanam, 4 feet long – Dasavatharam, Sree Rama-pattabhishekam and Sree Dharma Sastha, 3.5 feet long – Vinayakan and Sree Krishna Leela. These are scenes from Hindu mythology.

xii. Atha-chamayam- It marks the start of the Onam festival, i.e. on Atham. It features a Parade of caparisoned elephants, folk art performances, pandi-melam & Panch-vadyam (Percussion band), tableaus, etc. Thripunithara, near Kochi witnesses this legendary ceremony with almost all the folk-art form under one cultural fiesta or celebration. It also commemorates the victory of the king of Kochi.

xiii. Kazhcha Kula (Plantain Offering)- Kazhcha means gift and Kula means bunch; these are presented as offerings to deities in temples and gifts to relatives and friends. The curved shape along with long kudappan (maani) gives the look of an elephant tusk. The banana used are Chengalikodan-class plantain in bunches as it maintains the colour, beauty, look and shape of fruit. It is a sign of prosperity and adoration to the Elephant God. According to the capacity of people, the plantain Kula/bunch is bought and offered in the temple.

xiv. Ona-paatu (Songs) - There are many songs that are played during Onam which are specially made for this festival. It gives the full impact to the festival by creating a mood and meaning. Some of the hit songs are Maveli nadu vaneedum kalam, Para niraye ponn alakkum, Onam vanne, Thiruvavanu raavu, Poovili poovili ponnonamai, Paayippattail Vallam kali, etc.

The swing or onjal is also tied to branches of a tree or on the roof. People pushone another on the swing along with singing Onam and other songs.

xv. Ona-Pottan - This is a traditional custom in the north Malabar part of Kerala. It gets its name from the word Pottan which refers to deaf in Malayalam. This character does not speak and announces his arrival by ringing the traditional handbell. People come in the traditional costume with the face painted in red colour and traditional crown, umbrella of palm leaves and visits houses. They give blessings to people and people give them money, gifts and food.

I wish everyone "A Happy Onam ". Let this festival bring bliss, blush, well-being, success, peace, happiness, fulfilment and togetherness among you, your family and everyone that you are associated with.

I would like to add 'Onathallu' also to the list. Onathallu is also known as Avittathallu. 'Thallu' in Malayalam means clash, fight etc. Onathallu is a traditional fight (more of a friendly nature) that is done for fun during the festive season of Onam. However, it is not practised in all parts of Kerala. Mainly the Nairs in the Pallassena Desham of Chittur Thaluk in Palakkad district are into Onathallu. It was considered as a form of entertainment in the olden days.