India is the 10th largest aviation market in the world at present. The Government of India making efforts through the Aviation ministry to secure the 3rd position in the world by 2020. The industry has all the chances to reach this goal. As per a famous international journal, Indian carriers are facing a shortage of pilots in the year 2019. As per the indications, India will recruit 7000 pilots in the next five years. This is showing the significance of Aviation courses and aviation institutes as well. Boeing, the number one aircraft manufacturer, foresees around 4500 aircraft demands in south-east Asia for the next 20 years and most of the demand will be from India. The importance of aviation training institutes like GATI thus come into this context.

GATI (Government Aviation Training Institute) was established in 1946 by a group of commercial pilots and the initial name was Orissa Flying Club. In 1974, it merged with the Orissa Government Aviation Department and the name changed to Government Aviation Training Institute (GATI). After that, GATI has given wings to the dreams of many young students and all of them become commercial pilots. The notable person behind GATI is Mr Biju Patnaik who was the Chief Minister of Odisha. He was an Aeronautical Engineer, Navigator, an Ace Pilot, industrialist, an eminent freedom fighter and above all a crowning statesman of national and international repute. GATI was his dream and he fulfilled and watched the successful journey of GATI from a very close distance.

GATI received many awards over the years and one of the special Awards is from the Aero Club of India. They have given the Prestigious Trophy for the Best Performing Flying Academy in India to GATI for the year 2010-11, 2016-17 and 2017-18. The way GATI is going forward, it is sure that it will get more awards in the coming years also.

Recently we heard news about Anupriya Lakra who is the first Tribal woman pilot in India from the Maoist-affected area of Malkangiri District of Odisha. Ms Anupriya studied in GATI from 2012 onwards. So GATI has given her wings to fly and helped to complete her dream to be a pilot.

Why to choose GATI for aviation training

There are many Pilot licence courses ongoing across India. As mentioned above GATI got many reputed awards and it shows the experience of this institute. As per the authorities, they have well trained and skilled instructors making aviation training simple for the students. Unlike many other institutes, GATI has two different airstrips for training. They are at Bhubaneswar and Birasal. The students are getting training from Bhubaneswar International Airport itself and they also can fly under the direct control of Air traffic control of Bhubaneswar International Airport which is a great chance and experience for the boys and girls. GATI has a fleet of 6 aircraft - two Cessna 152, One Cessna 172P, and One Cessna 172 R Glass Cockpit, one Cessna 172S, and a Piper Seneca V - including multi-engine aircraft. Also, they are providing hygienic boarding and lodging facilities which are very important in the aviation industry at any level. Also, they are providing night flying facility to the students which will be a great advantage for their future.

1.Commercial Pilot Licence(CPL) To get the CPL license, a student should have a minimum of 200 hours of flying experience and 350 hours of the ground school experience. The rate for flying training is given below as of February 2019 is as follows- 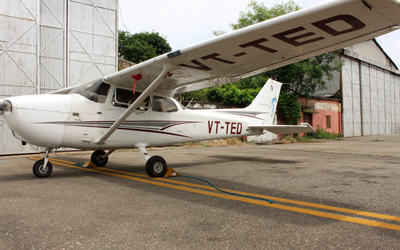 Cessna 152
[Picture courtesy by the website of GATI, www.flywithgati.com] 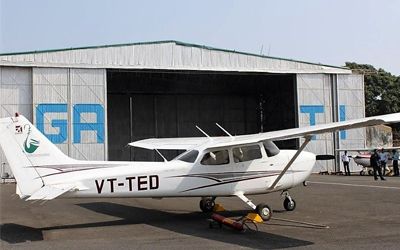 Cessna 172R
[Picture courtesy by the website of GATI, www.flywithgati.com]

Eligibility for CPL License
The candidates should pass 10+2 with Physics and Maths from a recognized school. Non-science students also can join through the National Institute of Open School. Age limit is a minimum of 16 years for appearing in SPL exam. There is a Medical clearance of Class II Medical (Indian) to be conducted by DGCA authorized Doctor. The student should be medically fit as per the standards put forward by Director General of Civil Aviation. Duration, of course, will be 18-24 months. This is a full-time course.

2.Private Pilot License(PPL)
This is the licence which allows a student to fly a private aircraft without any kind of remuneration. To get the PPL license, a student should go through ground school training as well as a minimum flying training of around 50 hours. Also, the student has to pass the examination conducted by the Director-General of Civil Aviation in ground subjects to get the PPL.

Eligibility
The student should have passed class 10th with Physics and Maths as the compulsory subjects. The minimum age will be 16 years for appearing in SPL exam. Medical report from Class II Medical (Indian) to be conducted by DGCA authorized Doctor. The student must be medically fit as per the standards prescribed by DGCA. Duration of the course will be 6-7 months and this will be a full-time course.

3.Students Pilot Licence(SPL)
SPL is the licence which enables you to fly as a student till you obtain your CPL. Students those who are interested to fly the aircraft as a student has a chance at GATI. For this, they need to undergo a test conducted by Chief flying Instructor at GATI, which is authorised by Director General of Civil Aviation. After this test, a student can start flying training.

4.Flight Radio Telephony Licence(FRTOL)
This is also called an RT License. This is essential for all commercial and airline pilots to operate radio equipment in an Indian Registered Aircraft. This is mandatory for getting Director General of Civil Aviation approved licence. There will be a written and oral examination on communication regulations and this licence is a must for solo flying.

5.Night rating(flying)
Night Rating makes the Licence holder capable to carry passengers at night. Students have to attend a test approved by DGCA which will be conducted by the Chief Flying Instructor (CFI) of the GATI, and this is essential for students before they start night flying of aircraft.

6.Instrument Rating
This is a test for which the trainee become capable to fly the aircraft through no visible weather conditions. They are helped by different onboard instruments to do this. The student should undergo a test by the Chief Flying Instructor (CFI) of the GATI which is approved by DGCA. Without this test, the student cannot start flying the aircraft.

7.Patter Flying
This is a training course especially for those who are interested to become a trainer of aircraft. The course requires rigorous flying training.

8.Ground School, RTR, 25hour
This is 25 hours flying course and it is designed for those who are preparing for a full style Commercial Pilot Licence. Also, thos who are going abroad for a commercial Pilot Licence will benefit with this type of training from a Director General of Civil Aviation-certified Institute like GATI.

9.Multi Training
This is training on an aircraft with multi-engine. The students will get training on such aircraft like Piper Seneca V PA 34 220T Full glass cockpit Aircraft (2007 Make). Students can do a 15 to 25-hour training on this aircraft for getting confidence before doing Commercial Pilot Licence training.

GATI is a reliable name in the aviation training industry with great experience since 1946. Apart from Anupriya Lakra, another girl from Ladakh which is in the northernmost corner of India, studied at GATI and became the second woman pilot from Ladakh. Not only people from Odisha, but also all other parts of India are studying here which itself is showing the significance of this pioneer Aviation Training Institute.

The final examinations for the tenth and twelfth standards have finished and so are many of the major entrance exams. That means that before the results are declared in late March and the college admissions start in early January, students have an immense amount of free time before them. This article tries to discuss what students can do with all the free time on their hands.

MBA - most coveted career in management

Here is detailed descriptions about the MBA admissions and various programs related this course. Here you will get detailed information about the specializations, difference and also how MBA career will affect your life.

Certificate courses that fetch jobs in IT sector

In this article I have provided the details about certificate courses in IT field that fetch you jobs with high pay. Here I have also given guidance to choose a certificate course that suits you. Read the article below to know more.

This article gives information on the Master's management degree courses for working executives offered by the Durgadevi Saraf Institute of Management Studies (DSIMS), Mumbai for the 2012-2015 session. You will get details about the course structure, , eligibility criteria, fees and apply for admissions to these programs.

This article provides detailed information about the various Aeronautical Engineering courses offered by the Regional Institute of Aviation Trivandrum and also provides details about the admission process.