In the first article we had discussed the MOJO concept of "MOJO" by Marshall Goldsmith.Understanding the mojo concept and its elements

To recall the basic definition, according to Marshall Goldsmith, MOJO "is that positive spirit toward what we are doing now that starts from the inside and radiates to the outside". It should be noted that MOJO is the positive spirit in each of us, right now. It is not based on the past or the future. Of course, learning can come from past experiences.

In fact, identity, which is one major element of MOJO, is based on past experiences. Let us first examine the element of identity, as explained by Marshall Goldsmith in a simple picture. (page 44, paperback edition) 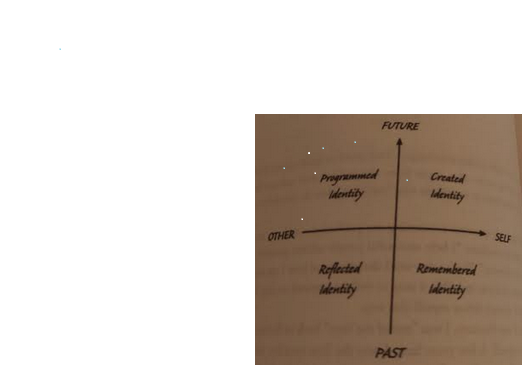 We will discuss all the four identities one after the other.

In the above picture, we can easily notice what is called Remembered Identity on the right-hand corner slot. This refers to those experiences in the past. These experiences may be positive or negative. "How do you know how you are? Because you remember events in your life that helped from your sense of self. It's not so important whether these are glorious moments in your autobiography or events you'd rather erase; what's important is that you can't forget these touchstones. For better or worse, they've left an impact -- and when you write a profile of yourself, these moments inevitably get reported". (page 45)

A simple analogy to this is the use of the derogatory phrase "dhandha choru" in Tamil. This translates to "free and waste food" that is told in some homes by fathers, with specific reference to the food that they get to eat in their homes. Since the son or daughter would be either totally unemployed or underemployed, it hurts them badly. However, those who are tough know how to navigate the hardships they face and convert every adversity to success. The man or woman develops several positive qualities later and proves to the parent that he or she was or is no waste at all. This author knows at least one person who was called by the above derogatory phrase. He went on to do an Oracle Financial Course and migrated to the USA where he further qualified himself. Among the two sons, he is totally so well off. In private conversation, the son would still recall the resolutions he made for himself, chief among them being that one day he would succeed so well that his father would regret having called him a waste.

Years later, this is exactly what happened. When the father was seriously ill, the son came running and spent a full week taking care of the father and meeting all expenses too. The other son did not care at all, though he lived only in Mumbai. The father regretted all that he had said. The son merely replied that the negative remarks made him tougher and determined to prove himself.

According to Marshall Goldsmith, "Other people remember events in your past and they remind you of them, sometimes constantly. "(page 46). In other words, through a process of feedback, we tend to reinforce ourselves with the picture we have of ourselves. This feedback from others is "how we shape our Reflected Identity".

For instance, in a particular case, the wife would keep on nagging the husband that he was "dirty". She had a mental image of what cleanliness was all about. Constant feedback from the wife that the husband was a 'big zero" made him feel sorry. However, others like the relatives of the wife liked the man for several of his other good qualities. This made him more confident. He learned to improve to the extent possible and also endure his wife's behavior. He played more on his strengths and became famous in the family. That his wife did not approve of his behavior was inconsequential. Today, both children, now gainfully employed elsewhere, support the father more than the mother as they have realized that the woman is still in a world of her own. It is hence possible to get over this reflected identity and still have a good MOJO. In our interaction with the external world, our external behavior will determine our MOJO. What comes naturally to us will be valued more by neutral friends who would be least bothered about our weakness that is specific only to our home lives.

In the upper left-hand corner is what the author calls as "Programmed Identity" This is "the result of other people sending messages about who you are or will become in the future."(page 47).

Such a profound message is particularly true for parents today. If either or both parents only talk about all the positives and encourage the child, he or she will positively have a good MOJO. This is mainly because such encouragement shapes young minds. Constant negative messages can ruin the person totally.

Here is another gem from Marshall Goldsmith. "Your Programmed identity has many sources. It can be influenced by the profession you enter, or the culture you grew up in, or the company you work for, or the entire industry you work in, or the people you select as your trusted friends. Each of these can shape your opinion of yourself, some more vividly than you realize". (page 48).

In this author's experience, at the world-famous Loyola College, Chennai, the teachers din it into young minds that they are smart, are capable and can do wonders. The standards of education are so high when compared to other colleges, as the college is an autonomous one. The electives in each course have a big depth in terms of knowledge. The entire culture is positive and is structured to bring out the best in every student. No wonder, the students go straight to many colleges in the UK and the USA for higher education. Each student has an opinion that he or she is a sure winner. He or she is fed with positive messages for the entire duration of their course., That makes a huge difference.

In the upper-right-hand corner of our matrix, is what the author calls as "Created Identity". According to Marshall Goldsmith, "this is where self and future meet. It is your Created Identity. Our Created Identity is the Identity that we decide to create for ourselves. It is the part of our identity that is not controlled by our past or by other people. The most truly successful people that I have met have created an identity to become the human beings that they chose to be -- without being slaves to the past or to other people. This concept is the beating heart of Mojo" (pages 49-50).

This is exactly how so many new Cricket stars in the Indian cricket team have come from very small towns and humble backgrounds. It is also true of so many celebrities in Tamil cinema. For example, the director Murugudoss, who came out with a series of good Tamil movies, came from a very poor family. His hard work for over fifteen years got him a break. Shankar, another celebrated director, hails from a very ordinary background. The music directors Ilayaraaja and A.R. Rahman have also come from ordinary backgrounds. Yet, they created extremely good identities for themselves that made them so famous.

We also have world-class Management Consultants like the late C.K.Prahalad, who actually hailed from Coimbatore, and went on to become one of the best thinkers of Management. We have had Dr. Rahguram Rajan and Sundar Pichai of Google. In each of these cases, celebrities have become what they are today, only because they have created unique identities for themselves. Such examples abound everywhere. If we look around, we can see humble Government school headmasters creating fabulous identities for themselves and serving the society in a significant way.

How do we go about creating such good identities? Quite obviously, we need to give up all the negative excess baggage of the past. We must learn to optimize all the opportunities that we now have, and this NOW is very important. For, our MOJO is all about doing the best we can with the best of positive intent and purpose, right now. Once we start doing this, we will realize that we have missed something in our journey. When we start picking it up, the pieces of the jigsaw puzzle start falling into place and we would to on from strength to strength. We would have joined "all the dots".

Marshall Goldsmith's book "MOJO" is a real eye-opener. It can become a very viable tool for creating our own unique identities. We need to work on the basics and when we do it, we will be able to feel the difference, in terms of a good MOJO for ourselves.