The word "rosary" is taken from the Latin word which means "garland of roses" and the rose flower is one of the flowers used to signify mother, Mary. It is a consecration in the nobility of our mother. Pope John Paul II, in his Angelus address on October 1983, expressed that The Rosary prayer is man's prayer for man(prayer for all the people of the world and of history, living and dead) asking Mother Mary to provide us with courage to fight against the temptations of evil, with the Cross and the Gospel(the word of God). It is also called as Japamala in Malayalam and referred with 53 beads (considering only the Hail Mary) in total, in the rosary. 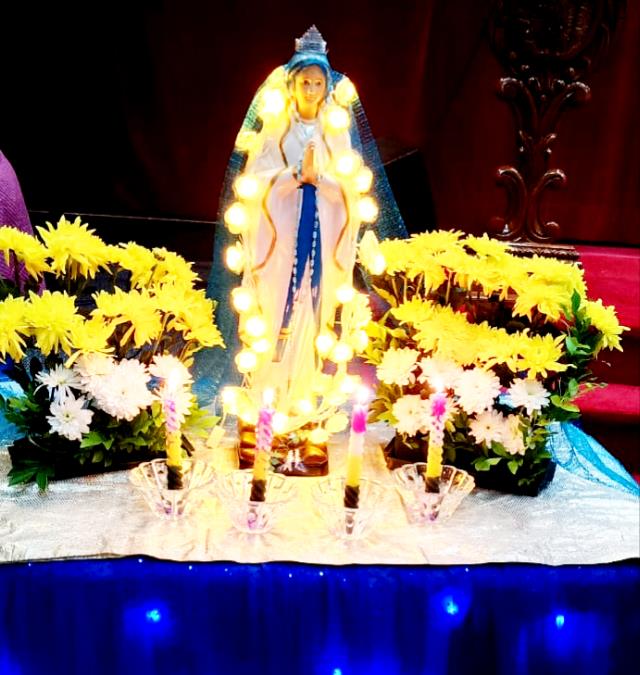 The Origins of the Rosary

The origin of the Rosary is unclear, but they say they use of "prayer beads" and continual repetition of prayers from the pre-Christian times and initial days of the Church. Proof shows that in the Middles Ages, people used strings of beads to count the number of Our Fathers or Hail Mary's recited and these strings of beads were known as "Our Father" in "Our Father" or "Paternosters." The form of the Rosary slowly changed between the 12th and 15th centuries and in due course 50 Hail Mary's were recited with verses of psalms or phrases reminding the lives of Jesus and Mary known as the rosarium ("rose garden").

There is belief that St. Dominic (d. 1221), the founder of the Order of Preachers (the Dominicans), received the Rosary in a vision of our Blessed Mother in the church of Prouille and this Marian vision was titled "Our Lady of the Rosary." In the 15th century, a learned Dominican priest and theologian Saint Alan of the Rock (Blessed Alanus de Rupe) received a vision from Jesus about the importance of restoring the rosary as a form of prayer. The Rosary gained greater popularity in the 1500s through Pope Pius V and he established the Feast of the Holy Rosary on 07 October 1572 in thanksgiving and remembering their victory over the Moslem Turks and benefits through the powerful intercession to our Blessed Mother. The rosary is a dedication in honour of the Virgin Mary and in 1597, the term "rosary" was used to the prayer beads. In the 16th century, the form of the five-decade Rosary in the set of three mysteries reigned. In the year 1917, the Fatima Prayer was added to the Rosary as informed to the 3 children in the appearance by Our Lady of Fatima. In 2002, Pope John Paul II in his Apostolic Letter on the Rosary(Rosarium Virginis Mariae), introduced the Luminous Mysteries as an option for Roman Catholics.

The Rosary as formed

It consists of an arranged amount of prayers. First, are the starting prayers: one Apostles' Creed (Credo), one Our Father (the Lord's Prayer), three Hail Mary's (Ave's), one Glory Be (Gloria Patri or doxology). The Rosary consists of the oration of five decades, each consisting of the Our Father, 10 Hail Mary's, and one Glory Be completed with the Salve Regina.

Introduced by the Creed, the Our Father, three Hail Mary's and the Doxology ("Glory Be"), the Fatima Prayer after each decade and concluded with the Salve Regina(Hail holy queen), the Rosary involves the recitation of five decades, each consisting of the Our Father, 10 Hail Mary's, and the Glory Be.

The Apostles' Creed (I believe in God)

The form of the creed was use around A.D. 125 and the present form came into existence from 400s. It is called the Apostles' Creed as it conveys the teachings of the apostles. It read out this way: "I believe in God, the Father Almighty, Creator of heaven and earth, and in Jesus Christ, his only Son, our Lord, who was conceived by the power of the Holy Spirit, born of the Virgin Mary, suffered under Pontius Pilate, was crucified, died, and was buried. He descended into hell, on the third day he rose again. He ascended into heaven and is seated at the right hand of the Father. He will come to judge, the living and the dead. I believe in the Holy Spirit, the holy Catholic Church, the communion of saints, the forgiveness of sins, the resurrection of the body, and the life everlasting. Amen."

The Our Father (Lord's Prayer) : This is the prayer that Jesus taught his disciples when they ask him to teach them how to pray and hence, known as the Lord's Prayer. It is given in the Bible (In the New Testament, Gospel according to Matt. 6:9-13; Luke 11:2-4). It is also known as Pater Noster (in Latin). It read out this way: "Our father, who art in heaven, hallowed be thy name, thy kingdom come, thy will be done, on earth, as it is in heaven. Give us this day, our daily bread, forgive us our trespasses, as we forgive, those who trespass against us. Do not bring us to the test but deliver us from all evil. Amen."

The Hail Mary: This is a prayer to our mother and is the centre of devotion. It is formed from the verses given in the bible which reads as:
Luke 1:28 - "Hail Mary, full of grace, the Lord is with thee." The greeting the angel Gabriel gave Mary.
Luke 1:42 - "Blessed art thou among women, and blessed is the fruit of thy womb, Jesus." The words Elizabeth, Mary's cousin, said to her when Mary visits her when she is pregnant and on seeing her, the baby in her womb jumps in joy.

The second part, Holy Mary is totally biblical. In 1 Tim. 2:1-4, St. Paul directs Christians to pray for each other "I urge that prayers, supplications, petitions, and thanksgivings be made for everyone" as it is good and pleasing to God our Savior" and as verses in Revelation 5:8, "The twenty-four elders fell down before the Lamb, each holding a harp and with golden bowls full of incense, which are the prayers of the saints." The saints in heaven can plead for us by presenting our prayers to God. It expresses as follows:
Luke 1:45 - "Holy Mary, Mother of God, pray for us sinners, now and at the hour of our death. Amen."

The Glory Be: It is called as the "Gloria or Gloria Patri" as per the Latin version. It is a hymn of praise and was used in the 4th century which was orated at the end of each Psalm. The present form of the Gloria is from the 7th century. It read out this way: "Glory be to the Father, and to the Son, and to the Holy Spirit. As it was in the beginning, is now, and ever shall be, world without end. Amen."

Fatima Prayer: This was added to the Rosary in the year 1917, after the appearance of our lady in Fatima and is commonly added at the end of each decade of Rosary. It read out this way: O my Jesus, forgive us our sins and save us from the fires of Hell. Lead all souls to heaven, especially those in most need of Thy mercy.

The Litany of our Lady: It is a prayer in chant-like way, having invocations and supplications and repetitively chanted by a leader with alternative response by the congregation. It is taken from the Greek word "litaneia", meaning "entreaty or request". It was composed in during the middle ages and approved by Sixtus V in 1587. It sanctions and requests set before us, our mothers elevated honour, her sanctity, kindness, power, motherly essence and queenly splendour along with her richness of purity and blessedness present in our Mother Mary in an enormously higher capacity.

The Closing Prayer This was compiled at the end of the 11th century and is prayer in exaltation of mother Mary. It is called the Hail Holy Queen (Salve Regina) and It read out this way: "Hail holy Queen, Mother of mercy, hail our life, our sweetness, and our hope! To thee do we cry, poor banished children of Eve. To thee do we send up our sighs, mourning and weeping in this vale of tears. Turn, then, most gracious advocate, thine eyes of mercy toward us, and after this our exile show unto us the blessed fruit of thy womb, Jesus. O clement, O loving, O sweet Virgin Mary." 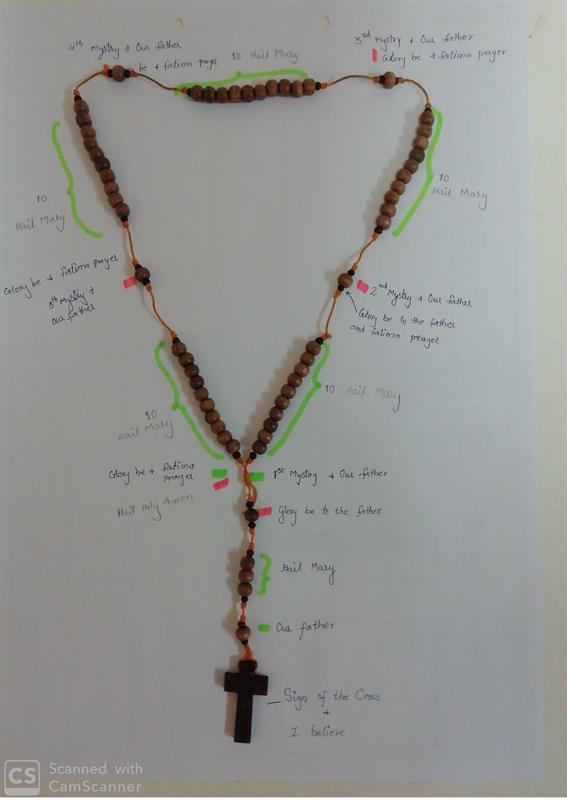 As now, you have aware of the prayers of the rosary; Let me explain the grouping of the mysteries and the decades. The prayers are grouped called as a "decade" which consist of 1 Our Father, ten Hail Mary's and a Glory Be. So, each decade has twelve prayers and ending with our lady of Fatima's prayer.
Every decade is devoted to the mystery concerning the life of Jesus or his mother, Mary. There are twenty mysteries which are divided into 4 groups of five each. The Joyful Mysteries, the Sorrowful Mysteries, the Glorious mysteries and the Luminous Mysteries. Usually, "saying the rosary" means saying any 1 group of mystery with a set of five-decade. Let's look at the mysteries.

The meditation on the mysteries

When you say a rosary, you recite the twelve prayers that form a decade of the rosary while meditating of the mystery related with that decade. Passing through the Joyful, Sorrowful, Glorious and Luminous mysteries of the Rosary, we bring to our mind Jesus's life, His passion and death, His resurrection from the dead, and His ascension into glory. When we reflect on the mysteries, it gives the rosary its dwelling power. The 4 groups of mysteries with its biblical link are as follows:

As we learn and use the Rosary, it brings us more close to our Lord and helps everyone who uses it to live a life of faithfulness, holiness and devotion. As we pray the rosary, we intercede our Blessed Mother to help us cope with our daily life and lead us to her son, Jesus and keep his perfumed aroma in our life.