Nucleic acid with ribose sugar is called ribonucleic acid (RNA). RNA is a single chain (Single-stranded) polynucleotide chain functions as a carrier of coded genetic information from DNA to cytoplasm take part in protein synthesis. RNA contains about 70-12,000 ribonucleotides, which are arranged in a linear sequence and are joined together by 3'-5' phosphodiester bonds. The axis of the RNA molecule is composed of the alternate residue of the sugar-phosphate backbone. Carbon combines with carbon 3' end of next sugar and phosphate with carbon 5' end of its sugar, just like that of DNA strand. It contains four nitrogen bases, Adenine (A), Cytosine (C), Guanine (G) and Uracil (U). The nitrogenous bases are complementary to a sequence on the DNA template.

RNA is of two types:

mRNA carries genetic information from DNA to ribosomes during protein synthesis. For this Jacob and Monod named it as messenger RNA. mRNA is either found free in the cytoplasm of the cell or associated with ribosomes. mRNA is synthesized from the coding strand of DNA within the nucleus and its base sequence is complementary to the coding strand. Therefore mRNA contains the same genetic information as coded in that part of DNA. The base sequence of mRNA in which information for the synthesis of protein is coded is called genetic code . The genetic code is formed of several codons. Each codon is a sequence of three nitrogenous bases which codes for one amino acid. As each codon is formed of three nitrogenous bases, it is called a triplet code. mRNA has a molecular weight of about 5,00,000 with the sedimentation of the coefficient of 8S. It is always single-stranded and there is no base pairing. mRNA is short-lived as it withers away after a few translations. In bacterial cells, its life span is about two minutes, but in eukaryotes, it is metabolically more stable and can function for a number of hours and even for days. 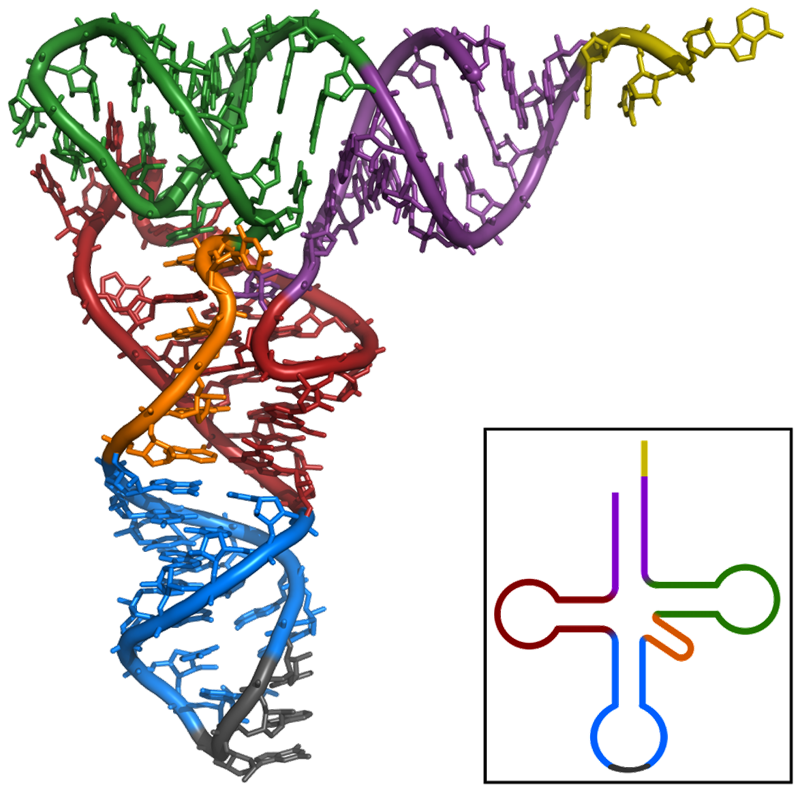 The transfer RNA is also called as soluble RNA since it is soluble in 1 M NaCl and is the second most common RNA in the cell. Transfer RNA constitutes about 15% of the total weight of RNA of the cell. The tRNA is a ribonucleic acid which transfers the activated amino acid to the ribosomes to synthesize proteins. tRNA is so small that it remains in the supernatant during centrifugation. tRNA has a sedimentation coefficient of 3.8S. It has a molecular weight of 25000 to 30000 and is made up of 73 to 93 nucleotides. tRNA is synthesized in the nucleus on a DNA template. tRNA consists of a single polynucleotide chain or strand which is bent in the middle and looped about itself.

Functions of tRNA
Transfer RNA plays a key role in protein synthesis. tRNA picks up a specifically activated amino acid from the cytoplasm and transfer it to the ribosome in the cytoplasm where proteins are synthesized. tRNA attaches itself to ribosome with the sequence specified by mRNA and finally, it transmits its amino acid to the new polypeptide chain.

rRNA is a ribonucleic acid present in the ribosomes and hence it is called ribosomal RNA. rRNA is insoluble and it constitutes about 80% of the cellular RNA. The ribosomal RNA is formed of a single strand. Each strand of rRNA is formed of many nucleotide units. Each nucleotide of rRNA is composed of a nitrogenous base, a ribose sugar and a phosphate molecule. The nitrogenous bases are adenine (A), Guanine (G), Cytosine (C) and Uracil (U). In some regions, the single strand is twisted upon itself to form a double helix. The helical region is joined by intervening single-stranded regions. In helical regions, most of the base pairs are complementary and are joined by hydrogen bonds. In the unfolded single-strand regions, the base pairs are not complementary. Because of this nature in the rRNA, the purine and pyrimidines have no equality. rRNA is also synthesized in the nucleus. DNA associated with the nucleolus is responsible for coding of rRNA. This part of DNA is known as nucleolar organizer region.

So, we can say that RNA is the genetic material of plant viruses and it plays an important role during protein synthesis in eukaryotic cells.

No responses found. Be the first to comment...
Submit Article
Return to Article Index
Looking for University or College admissions in India for 2023 - 2024 Academic Year?