Our country is famous for tourism. India's tourism places attracts lots of tourists from different parts of the world. Delhi is an old age city connected to royal empires, architecture, mythology and a place bounded with beautiful landscapes and is the most popular destination of tourists. This place was once a residence of the mighty royal rulers. The architectural style of this city keeps it very special when compared to other beautiful tourist centers of India. Delhi was fondly known as the 'Cosmopolitan city of India' as it hosts people of various religions and cultures. Here the following are some of the most beautiful tourist destinations of Delhi.

Birla Mandir is a Hindu temple located near Gole Market, Connaught Place on the way to Mandir Marg. The temple is dedicated to Lord Vishnu and Goddess Lakshmi. In this temple complex, we can even see Lord Shiva, Lord Krishna, Hanuman, and Buddha.

This beautiful temple was built by the industrialist Sh. J.K. Birla in 1939. King Udaybhanu Singh laid the foundation stone for the temple. Nagara style is used in constructing this temple. After its construction, this temple was inaugurated by Mahatma Gandhi on the condition that it should allow all castes people to enter the temple.

The shrine is built in the form of a multi-storied building. The built with red sandstone and the walls and pillars are beautifully carved with intricate designs. A beautiful garden is found around this temple with artificial caves, animals made out of stones, waterfalls, and fountains. A large horse-drawn chariot carved on white marble is the special attraction of this temple. 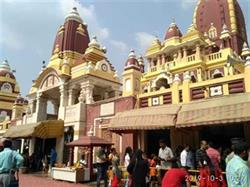 (Photo: By the Author)

The temple complex includes an Abhisheka Mandap, Sahaj Anand water show and a thematic garden. Three exhibitions namely Sahajanand Darshan related to a Hall of Values, Neelkanth Darshan where an IMAX film on the early life of Swaminarayan as the teenage yogi will be shown, and Sanskruti Darshan appears in the form of a cultural boat ride. The light and sound show in the evening is worth seeing for its visitors. The architectural decoration and construction of this temple inside as well as outside leaves you mind-blowing.

Metro train has a stop for this place at Akshardham. This temple opens on all days except on Monday. The entry timings from 9-30 AM to 6-30 PM.

The Lotus Temple is the mother temple of all religions is located in Shambu Dayal Marg, Kalkaji, New Delhi. It was built by one of the newest religions in the world Bahai and was opened in December 2005. It is opened to all to pray regardless of any religion. Ten million dollars were spent on constructing this temple. It was designed by Iranian architect Fariborz Sahba.

The temple is made of 27 free-standing marble-clad petals. Around the blooming petals, there are nine pools of water that refract light in different directions from a natural source of light. The temple has 9 doors through which we can reach a central praying hall. The Central Hall has a capacity of 2,500 people to sit and pray at a time. The top of the temple is made of glass and steel roof which allow natural light into the praying hall. Lotus is a symbol of purity, beauty, and divinity. The Lotus shape of the temple attracts visitors and is one of the unique types of temples visited by lakhs of people every year.

This temple is opened on all days for visitors except on Monday. The timings to visit are from Sunrise to Sunset.

Jama Masjid is a Congregational mosque for Friday prayers or Eid prayers. It is one of the largest mosques in India. Mughal emperor Shah Jahan built this Masjid between 1644 to 1656 for 1 million rupees. Jama Masjid is located in Meena Bazar, Chandini Chowk in New Delhi. It is located close to Red Fort. Jama Masjid stands for an example of Islamic or Mughal architecture. Red sandstone and white marbles were used in the construction of this Masjid. This Masjid can accommodate 25,000 people at a time for prayer.

India Gate is a 42-meter tall monument built as a war memorial in honor of Indian soldiers in 1931. India Gate is located on the eastern side of Rajpath. On either side of the India Gate, we can see huge lush green laws, canals and tall green trees. Actually, India Gate was built in honor of 70,000 Indian soldiers who fought along with the British Army and lost their lives in World War I. Under the gate, we can see a continually lit flame in honor of soldiers who have given their lives to the country during the India-Pakistan war in 1971. India Gate is the place where the Republic Day parade takes place every year on 26 January. The floodlit lights and the roaring fountains surrounding it gives a beautiful look to the India Gate at night time.

One of the most historical regions to visit in Delhi is the Qutub Minar complex. In this complex, one can see monuments and buildings in the ruined state which were built by Delhi Sultanate at Mehrauli, Delhi. At this place, the annual three-day Qutub Festival will be organized annually which accommodates a gathering of musicians, artists, and dancers. Qutub Minar Complex includes the Quwwat-ul-Islam Mosque, Alai Darwaza, Alai Minar, Ala-ud-din's Madrasa and Tomb, Iron Pillar, Tomb of Imam Zamin, Sanderson's Sundial and Major Smith's Cupola.

India Gate can be visited at any time. 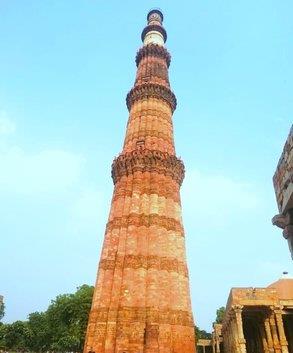 (Photo: By the Author)
Qutub Minar at New Delhi

The timings to visit this place is from 10 AM to 6 PM.

Jantar Mantar is an astronomical observatory was built by Maharaja Jai Singh II in 1724 in Delhi. This observatory is located in Sansad Marg, Connaught Place in New Delhi. Jantar Mantar complex includes thirteen different instruments that are used for different purposes like figuring out Sun, moon, planet cycles, and other astronomical measurements.

The Red Fort or Lal Kila is a massive historical Fort is located in the city of Delhi. It was built by Shah Jahan between 1639-1648. It was the main residence of emperors of the Mughal dynasty till 1857. The Fort was identified as UNESCO World's heritage site in 2007.

Red Fort was built with Red sandstone and thus got its name. The Fort includes Hall of Public Audience (Diwan-i-Am), the Hall of Private Audience (Diwan-i-Khas), private apartments, Moti Masjid, etc. Every year on 15th August Indian Prime Minister hoist the tricolor flag at the main gate of the Red Fort and deliver a nationally broadcast speech from here.

It is located in Netaji Subhash Marg, Chandini Chowk, New Delhi. The nearest metro train stop near this place to visit is Akshardham. The timings to visit this place is 9-30 to 4-30 PM daily except on Monday which is a holiday.

Lodi garden is a 90 acre garden in 1936 around four monuments built during the Lodi dynasty. The monuments around which the garden is laid out are Muhammed Shah's tomb, Sikander Lodi's Tomb, Sheesh Gumbad and Bara Gumbad. This lush tree green shaded park provides and a boding place for 100 species of trees and 50 species of birds and butterflies. In this garden, we can also see 15 monuments which attract visitors.

This Lodi garden is located near Khan Market. The nearest metro station to this place is Race Course. Timings to visit this place at 6 AM to late at night.

It is 176 acre Zoo located near the Old Fort. This Zoo was opened in 1959. The Zoo is a home place for 1350 animals representing almost 130 species of animals and birds collected from around the world.

This Zoo is located in Mathura Road, Sundar Nagar, New Delhi. The nearest metro stop for this place is Pragati Maidan. Timings to visit this Zoo is 9-30 AM to 5-30 PM.

Here is a video on the beautiful surroundings of Qutub Minar Complex:-