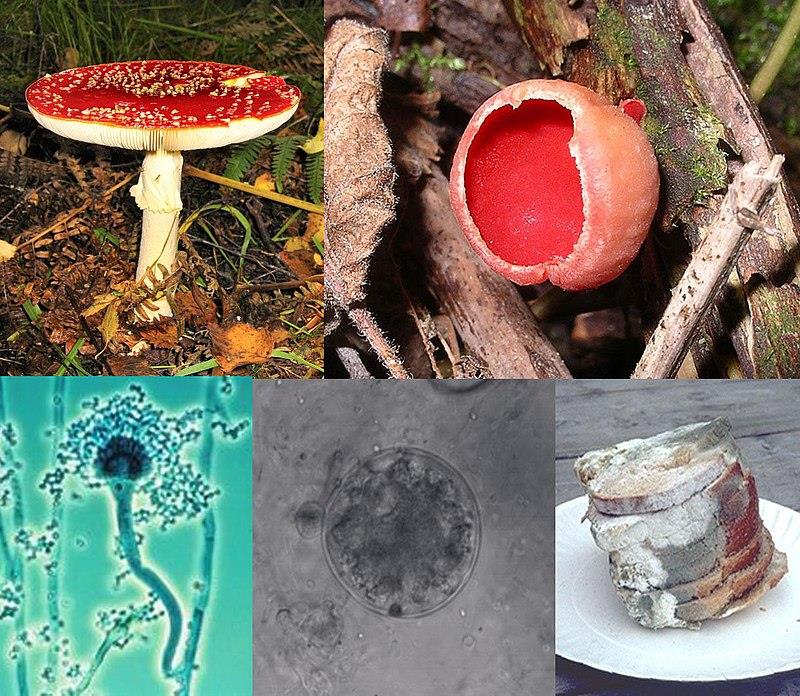 Molds are multicellular hyphae bearing fungal organisms that grow in warm, dark, damp places. Some Molds even grow in freezing temperatures. Molds can mostly grow on foods, leather, paper, and wood. Some molds are saprophytic and some other molds are parasitic. Many molds spoil food and damage fruits. Some parasitic water molds kill fish and other sea animals. Molds are also used in making Roquefort, Camembert, and Limburger type of cheeses. Antibiotics like Penicillin, Streptomycin, Aureomycin, etc. are prepared from fungal molds.

Mildews are whitish fungi that grow exclusively on moist surfaces. Mildews grow on plant and animal tissues, wood, paper, clothing, leather, etc. Some mildews are downy and attack such plants as radishes, potatoes, cereal grains, sugar cane, and tobacco. Some mildews are powdery and attacks grapes, apples, clover, roses, lilacs, phlox. Black mildew is often found on clothes exposed to dampness for a long time. Most of the mildews are parasites and reproduce by spores.

Mushrooms are the largest type of fungi present in nature. They have an umbrella-shaped appearance arranged over a vertical stipe. They are saprophytic and mostly live on dead plant and animal matter. They reproduce through spores. Some variety of mushrooms are edible and are highly nutritious which provides high-quality nutrients along with minerals. Puffballs are one kind of mushrooms which round or pear-shaped appearance. Examples for Puffballs:- Bovista, Lycoperdon, Calvatia.

Yeasts are tiny oval single-celled fungi. Yeasts are widely used in bakery and brewery industries because they help in the fermentation process. They help in making bread and various types of alcohol. Yeasts help in breaking down sugars into alcohol and carbon dioxide gas. Yeasts are also helpful in synthesizing B2 vitamin in their cells.

Lichens are special kind of organisms which include two living components-one of its living component is an algal organism and the other living component is the fungal organism. These two living components exist together as one organism helping each other mutually. This type of mutual association between two organisms is known as a symbiotic association. Lichens may be green, red, orange, yellow or brown depending upon the two different components present in them. Lichens primarily grow on bare rocks and make the rock crumble and turn into soil. Reindeers use lichens as their food. Lichens are used in making litmus paper, dyes and in tanning hides for leather. More commonly, the lichens are also used as food in China, Japan, and Iceland.