A fairly simple but very effective and lucid description of the basics of Divergent thinking has been published by Thomas Malnight, Ivy Buche and Victoria Kemanian in the Smart Manager Magazine, issue of Sep-Oct 2018, pages 37-42. All three experts teach at the International Institute for Management Development, Switzerland.

According to the authors, Divergent thinking is "a process for identifying new opportunities, finding multiple creative ways to address intractable issues or abstract problems and challenging the organizational status quo, The benefit of divergent thinking is that it encourages people to think from multiple perspectives to open theoretically limitless options, followed by sense-making, ultimately resulting in more innovative solutions or breakthrough possibilities to address the challenge at hand."

The authors quote the example of an organization called Loomis, which is a market leader in cash management services. In 2016, the organization faced an existential crisis. The organization starred at a digital world where the use of cash was becoming extremely limited. Loomis used a Divergent thinking lenses framework that has four lenses. These are The two-dimensional approach, Future Back, Outside In and Disruption.
The framework is captured in the following figure.(taken from page 38) 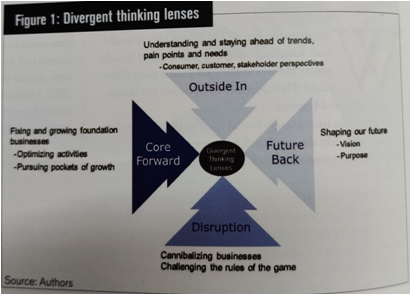 We will now go into some details of each of the four lenses. A few Indian cases have been added to illustrate some points.

The authors describe this in good detail. "A two-dimensional approach, comprising core-forward and future-back thinking, serves to break the incremental mindset that prevails in many companies today. This requires the leadership team to have a point of view on where the company is headed in the longer term" ( page 39).

Coming back to the same example of Loomis, this resulted in the organization getting into forex solutions in a big way. By moving up the customers' value chain, the organization was able to obtain better margins. "At the same time, future-back thinking enabled it to "seed" new platforms to handle digital payment options. This was a priority for innovation, both internally and for acquisitions."(page 39).

A well-known case in India is ITC, which has leveraged its agribusiness strengths to forge ties with thousands of farmers, by "co-opting customer competence" through its e-choupal initiative of providing IT infrastructure and then working with the same farmers as customers. Coca Cola's Minute Maid's .successful diversification into an extremely good cool drink called "colors" with a distinct flavor of grapes to take on competitors like Bovonto, is another example. Though the product is now a good success in Tamil Nadu, it might be extended to new areas as well.

As regards Future Back, which concentrates on the future, the components are Vision and Purpose. "Purpose is the reason why a company exists. Fundamentally, purpose allows a company to expand its impact -- on multiple stakeholders, across the ecosystem, today and in the future"(page 39).

The best example of an organization's purpose, in India, can be seen in the Vision and Mision Statements of Arvind Eye Care System, which is an internationally famous chain of Eye Care hospitals. Its website clearly states its Vision: "To eliminate needless blindness...." and its Mission is through Eye hospitals that provide compassionate and quality eye care affordable to all and through its Outreach facilities "Extending the reach of quality eye care to the poor and needy - through active community involvement, screening camps, and IT-enabled Vision centers in rural areas". It is a well-known fact that Aravind Eye Hospitals lives its Vision and Mission day after day.

The authors define this thus. As the name implies, the outside-in lens asks "What will the ecosystem of the future look like in which companies must play -- and win?" The authors quote the example of Loomis, where "an in-depth analysis of the implications of the external trends enabled it to tackle the fundamental challenge of leveraging the transition occurring in the overall cash ecosystem. The results though intelligent strategies made the organization very successful." The authors summarise the results in the following diagram. (page 41). 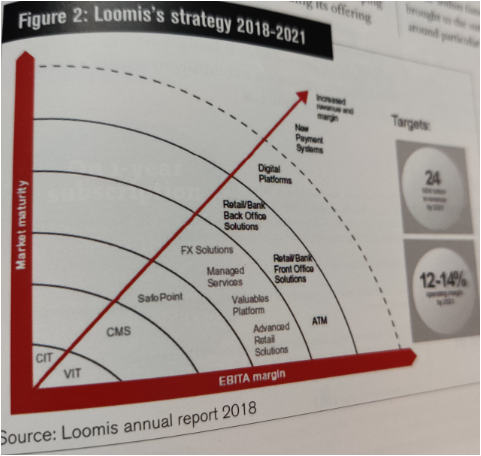 In the private sector Marico Industries, the manufacturers of the Parachute brand of coconut oil, the organization had its own in-depth analysis to make when it was confronted with the brand of coconut oil from Hindustan Unilever, called Nihar. The organization adopted a strategy of even going the extra mile to reinforce the big strengths of its Parachute coconut oil, through high decibel advertising. Ultimately, the giant Hindustan Lever was forced to sell its brand to Marico Industries. Even smaller organizations do not give up when they are faced with such multinational competition. The continued success of Arun Icecream in Tamil Nadu is one such willingness to fight it out and not surrender. There were numerous offers to sell the brand but the founders stayed firm.

The authors hit the bullseye with this observation. "We find that it is a combination of complacency and arrogance that blindsides leaders and prevents them from recognizing disruption from different quarters."

The manufacturers of the two successful brands of cars, Ambassador and Fiat failed to read the danger signals when Maruti came along. They could have easily upgraded their technologies and their brands. Their arrogance made them believe that their cars will always sell. It never happened and the organizations went down under.

The authors go on to explain more about disruptive threats. More often than not," most organizations are not prepared to disrupt themselves or even think about cannibalizing themselves."

The best example of such an organization that has been left behind in the race is the Tuticorin based Tamil Nad Mercantile Bank. Though it is still profitable, it has not attempted disruptive innovation at all. Its major competitor, the Karur Vysya Bank went from strength to strength through innovations of a tall order. It modernized its branches and then recruited a good number of young managers who were trained in the nuances of providing top-notch customer services. In the big cities like Coimbatore, for instance, KVB has been able to beat the biggest threats like even Axis bank in terms of both deposits and advances. It's aggressive advertising on the one hand and its strategy of addressing different segments of customers through innovative offerings, helped it to change so fast that today, it is among the leading private sector banks in India. It is already over one hundred years old and is raring to go.

To quote the authors "the power of divergent thinking lies in expanding the areas of choice beyond what is being done today, and to build concrete options for a company to remain relevant and succeed in the future".

Through a deliberate strategy called focus, where the organization is rooted in its core areas of strength and does not diversify into areas where it is either a new player or where it takes several years to even become relevant, the likes of the Aditya Birla Group, L&T, Asian Paints, NTPC, NLC, ONGC, and the TVS group, among several others, are what they are today, as they had a clear Vision of their future some fifteen years ago and then systematically built all their Core Competencies to strengthen their competitive product or service offerings to global customers on a sustained basis.

Based on some conceptual ideas provided by the authors under reference in their article published in the Smart Manager magazine, some basic ideas of Divergent Thinking have been discussed above. The Indian examples will explain the contextual reference to the main points discussed in the article.