Mahesh Babu's desire to act in a comedy movie once a while along with his other commercial movies came true with Anil Ravipudi's "Sarileru Neekevvaru." This movie is a well-packed Sankranthi festive treat for viewers and Mahes Babu's fans as it has something for everyone. It entertains everyone as it has some mix of comedy, beautiful rhythmic songs, punch dialogues, heroic fights, romantic scenes, and excellent photography. Anil Ravipudi tried to show this movie with a message of patriotism, thoroughly mixed with a flavor of fun and comedy. To know how much he succeeded in his experiment one has to watch this movie on the silver screen only. 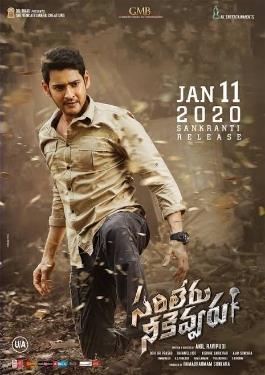 Major Ajay Krishna (Mahesh Babu) is an adventurous military man. Ajay Krishna was a Major military officer in this story and he always takes things in an easy and funny way. During a rescue operation of children's kidnapping, his associate soldier Ajay (Satya Dev) was seriously wounded. This makes Ajay unable to attend his sister's wedding and to help his mother Bharathi (Vijaya Santhi) in the wedding arrangements. In order to make up for his absence, Ajay Krishna moves to Kurnool to help Ajay's mother Bharathi in the wedding arrangements. Bharathi is a Professor by profession leading a lonely life in Kurnool. She is facing threats from a local goonda Nagendra Prasad (Jaya Prakash). Ajay Krishna enters the scene at Kurnool at this moment and realized the problems faced by Bharathi. What is the reason for the situation between Bharathi and Nagendra Prasad? How Ajay Krishna saved Bharati from the clutches of Nagendra Prasad? How Ajay Krishna managed to take hold of Nagendra Prasad? What is the role of Samskruthi (Rashmika) in this movie? To know answers to all these questions one has to go to the theater and watch it on the silver screen only.

Positives of this Movie

Sarileru Neekevvaru is a comedy movie in the backdrop of patriotism where soldiers devote their lives to guard India. As it is a fun-filled movie, small children to elders will like this movie in the same way. This movie from the beginning to the interval is filled with a lot of comedy. The part of the story where Mahesh (Ajay Krishna) starts traveling to Kurnool in a train entertains everyone with a lot of laughter. Rashmika, Rajendra Prasad, Ravu Ramesh, Bandla Ganesh, Sangeetha, Appa Rao are the others who are involved in the train episode along with Mahesh Babu and gave funny entertainment for the viewers. Mahesh Babu's timely punch dialogues with other actors are the main highlight of this entertaining movie. Mahesh Babu excelled over everyone in the acting crew with his versatile fights, punch dialogues, and dances like does in any commercial movie. After a long gap, Vijaya Santhi outscored in her role as a professor and doting mother and she shouldered the movie till the end with ease. The highlight scene of the movie is where Mahesh Babu reveals Vijaya Santhi about her son's death with heart touching dialogues. Devi Sri Prasad's music is a plus point for the movie. The title song praising soldiers is melodious. Prakash Raj excels in his villainy by mixing all his expertise and all his talents as usual. Director Anil Ravipudi is able to succeed in extracting the worth of Cinematography, music and comedy entertainment from his crew more than in any other sections of cinema making. Mahesh Babu, Vijaya Santhi, Prakash Raj have done 100% justice to the roles that they got in the movie.

The big movie "Sarileru Neekevvaru" has a very thin baseline story which has no scope for dragging for three hours. Even though the first half entertains the audience with a lot of fun, the second half bores the audience with unnecessary dragging of the story. Director gave more importance to create comedy scenes but failed in providing a good entertaining story for the viewers. Weak story baseline is the main drawback of this movie. In one way the movie is an average movie that gave some funny entertainment in between but the director failed to attract the viewers with his screenplay. The role allotted to Rashmika didn't fit into the story well and spoiled the overall image of the film.

Sarileru Neekevvaru is a mass comedy entertainer movie which partly succeeded in the purpose of entertainment but failed to attract viewers to the utmost as it lacks no proper screenplay and strong story baseline. So my rating for this movie is 3 out of 5 marks.

You can view Sarileru Neekevvaru Trailer:-