Psoriasis is an autoimmune condition that promotes the rapid build-up of skin cells that causes discomfort on the surface of the body. It causes thickening of the skin surface, develop thick red patches and silvery scales over the surface of the body. The silvery scales drop off regularly and again develop. This discomfort condition causes a kind of social shyness in the individual and so one cannot move freely in society. But with proper care, lifestyle changes and treatment one can overcome the ill effects of this disease.

Our skin is a protective physical barrier for our body which prevents the entry of germs like bacteria, chemicals. Skin by its glowing surface, it provides beauty to our body. The skin is made of 5-7 layers of cells which gives protection to the body. Psoriasis speeds up the life cycle of skin cells and causes cells to build up rapidly to form thick red patches on the skin. Psoriasis condition mostly appears on forearms, knees, legs and even on the scalp. It gives an ugly appearance to the skin and sometimes people may think it is a contagious disease. But Psoriasis is not at all a contagious disease. If proper care and treatment are not taken, the complication may spread to joints, heart, liver, nails and it may lead to diabetic conditions. Joint pains is the most common side effect of Psoriasis disease in its severe state. Psoriasis may show its effect for a few weeks or a few months and may disappear suddenly. Sometimes this disease may appear seasonally. The disease may also prevail as long term chronic disease. 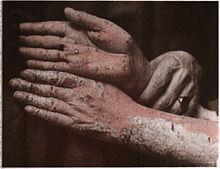 There are no proper reasons to say how psoriasis is caused. Cytokinin secretions produced form our body cells as a part of immune development. By mistake, these secretions attack our skin cells is one of the causes of this disease is what scientists revealed through their research. This reaction in the body causes inflammation of the skin and rapid skin cell production. Usually, the skin cells to appear on the body surface which they get pushed from below layers of the skin it takes around 28 days. But due to rapid cell production, the new cells from below appear on the upper surface of the skin within 3-4 days. This leads to the formation of thick red patches on the skin with silvery scales on them.

Light pink or bright red colored thick patches with white silvery scales on the skin, skin becomes dry and peel off, burning sensation on the skin, irritation or itching skin with pain are the chief symptoms of Psoriasis. Psoriasis caused to scalp shows small patches of white rash often people get confused with this as dandruff. Most of the Psoriasis symptoms remain for a long duration. But sometimes they disappear suddenly and suddenly reappear again. Some external factors also aggravate this disease. So we have to take care of these factors to keep the disease under control. The common factors that aggravate this disease are

Psoriasis can be caused by people of any age. Usually elder age people are more prone to this disease. People can get Psoriasis through heredity or people who are facing obesity problems, mental depression or having heavy smoking habits.

There are different types of Psoriasis and got their name on the basis where they are caused. They are

It is the more common type of Psoriasis. This is characterized by thick red patches with white silvery scales. This type of Psoriasis can be mostly found on elbows, knees, lower back and scalp and can spread easily to other parts.

This type of Psoriasis can be mostly caused on palms and feet. It develops as white pustules on these parts surrounded by thick red skin. Symptoms associated with this Psoriasis is fever, chills, muscle weakness, loss of appetite, rapid pulse, etc.

This is a severe type of Psoriasis. It can spread to the entire body. Due to the excessive supply of blood to the skin, the heart becomes enlarged. This Psoriasis may lead to infection of lungs and skin, kidney failure, etc.

In this type, pits will be formed on the nails, nails become thick, blackening of nails, loosening and dropping off nails occur. There is no cure for Psoriasis of nails but with some medication improvement of nails appearance can be possible.

6. Other types of Psoriasis

Flexual Psoriasis is caused to armpits, skin folds, and genitals. Pustular Psoriasis can be found in the form of white or yellow blisters or pustules on the skin.

The following lifestyle changes will help in controlling Psoriasis disease.