Ala Vaikuntapuram movie production is a combined effort of Screenplay and dialogue expert director Trivikram, Stylish Star Allu Arjun, Star Producer Allu Aravind and Radha Krishna, and music magician Thaman. The three songs released three months before ahead of this movie as trailers became sensational hits in the music world. This movie was released as Sankranthi's festive treat for the audience. In this review, whether the movie is able to cross the expectations of the sensation it got in its audio release? Whether director Trivikram is able to mesmerize the audience with his screenplay and treat of the story? Whether Stylish Star Allu Arjun is able to reach the expectations of his fans and common audience? Whether Thaman's music becomes a plus point or not for the movie? You can go through the below review to know the answers to the above questions. 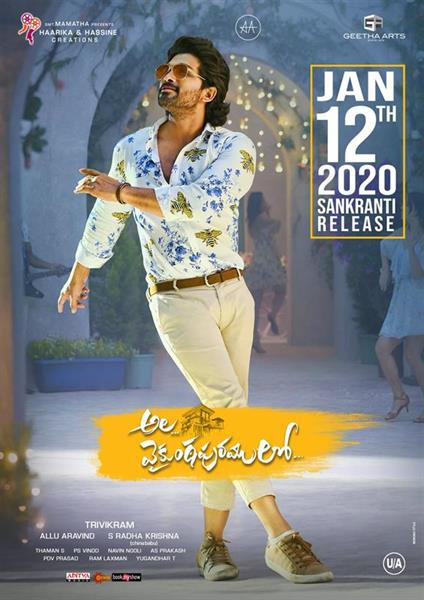 Rama Chandra (Jayaram) and Valmiki (Murali Sharma) are friends belongs to two different economic backgrounds. While Ramachandra becomes the owner of the big enterprise ARK group in course of time but Valmiki leads a middle-class life working in his own friend's enterprise. So Valmiki developed a kind of jealousy and grudge over his millionaire friend Ramachandra. When both their wives deliver in the same hospital on the same day, Valmiki by mischief exchanged their kids thinking that his son can be brought up in a rich family unlike him. Bantu (Allu Arjun), the real son of a millionaire Jayaram is leading a normal middle-class life in the house of Valmiki. Raj (Sushanth), the real son of middle-class Valmiki brought up in a rich environment of Ramachandra house. After 20 years, while he is in search of jobs, Bantu joins as an assistant to Amulya (Pooja Hegde) in a tourism company run by her. As they fall in love in the course of time, Amulya connects with Jayaram's family. Jayaram thinks otherwise and thought of marrying Amulya for his son Raj (Sushant). Amulya's father okays for the proposal of Jayaram. One day Bantu is able to know who is his real father is and it changed his life. Why Valmiki developed grudge and jealousy towards Ramachandra? How Bantu is able to know who is his real father after 20 years? What happens to the love of Bantu and Amulya? Will Bantu reach the house of his real parents? To know all these answers one has to see the movie in the theater on a silver screen only.

Analysis of the movie

From the beginning of the movie production Ala Vaikuntapuram lo, hero Allu Arjun and director Trivikram together announced that they want to make a movie in a casual and happy way thus they did the same. After watching this movie one can easily realize it is a fun-filled family entertainer. A simple old story plot with no sudden twists, no extraordinary action-packed scenes with chasings and fights in the movie. But the movie is filled with Trivikram's trademark takings, Allu Arjun's comedy timing, crisp acting, amazing dancing, ear throbbing songs mixed in a perfect ratio makes the audience enjoy the movie to their fullest.

The audience can easily guess the twists and turns of the story after viewing the movie for a few minutes at the beginning itself. But the entire credit goes to Director Trivikram for his exceptional handling of the screenplay which made the audience spellbound to sit in their seats to enjoy the movie from beginning to end without a semblance of boring.

Positives of the movie

Even though Vilanism was less shown in this movie, emotional scenes are well carved. The scenes showed between fathers and sons towards the end of the movie makes the audience immersed in deep emotion. Dance and fights are shown by Allu Arjun in this movie gave a special look to him than in his previous movies. Pooja Hegde and Tabu justified fully to the roles that they got in the movie. Fight masters Ram-Lakshman composed the fights in a stylish and new trendy way.

The movie got an amazing rich look because of excellent Cinematography work by Vinod. The decent songs of the movie were well composed by Siri Vennala Sitarama Sastry and Jonnavittula and music by Thaman added a great value to the movie. Thaman's background score for the entire movie is simply superb. All the songs of the movie are superb, the situation in which the songs were introduced and the actors involved in these songs make this movie brilliant. The entire crew of this movie raised to the expectations and gave their best to the rich budget invested by the producers.

The weak point of the movie is there is no newness in the story of the movie. No strong villain and lags in the second half is a little drawback in the film. The movie climax also disappoints many audiences. The narration is slow in some portions of the movie. The role of a class comedy actor Sunil got wasted as he didn't find any proper place in the story. Raj Manohar (Sushant), the main role of the story had no proper dialogues. So many characters introduced in the movie appear to be quite distracting and confusing.

Ala Vaikuntapuram lo is a trademark Trivikram's fun movie mixed with all kinds of masala to enthrall the audience in the festive season. The comedy, the songs, the rich photography, the story narration never gets bored as you watch the movie. My rating for this movie is 3.25 out of 5 marks.

Some Effective Tips For Running Your House!

Your house wafts the smells of happiness and prosperity only when you carry on the responsibilities of home not as a burden but as your duty. In such a home resides both happiness and peace. Let’s discuss in this present dissertation what the tricks of running a harmonious home are filled with the conviviality and affluence.

What care should be taken while touring in a car or van?

This article describes about what care should be taken which being on a tour by a car or van. What are some the key points to remember and the list of questions one should ask to driver in order to ensure before touring

Some people across the world shower their affection on their pet dogs.

Ala Vaikuntapurramlo is a hit movie that was released in the festival season in both the Telugu States. After a long gap, Allu Arjun is the hero in the movie. 'Trivikram', the name which has its value in the Telugu cinema has shown his capability as a writer. Without any big dialogues, he managed but there are very good dialogues which can't be forgotten easily.

A family entertainer and all the family members can sit together and watch the movie. The songs are also hits. The action of Arjun is very good and he acted the role very easily. There are no twists. A simple story with a very good screenplay.

After a long gap, we have seen a very good movie that is flawless in direction and very impressive in acting.

Ala Vaikuntapurramulo has got mixed reviews in the beginning but gradually turned out to be an industry hit. The story line is absolutey simple while the whole concentration of the director is shifted to design the characters with depth. Here we can feel connectivity between the characters and the weaved threads between them are maintained strong till the end.

Thaman's music carried the soul of the film. Especially the song "Ne Kaalanu patuku" is aptly composed to beautify the romantic touch between the leads. All the actors performed well but the role of Nivetha Pethuraj is limited may be a disappointment to all of her fans. Have you ever imagined a powerful fight going on with a soothing folklore? No, right? That's what the magic of Trivikram is.

The foot-tapping "Putta Bomma" song in this movie has become very popular and is being played in every function and stage. Allu Arjun and Pooja Hegde made a good pair. But there was disappointment in the comedy section as no impact was made. A word of appreciation to the fight master who created a new trend in fight scenes and drew huge applause from the audience.