The characters of some movies are made with more emphasis on dramatic touch and such movies may snatch success in an unbelievable way. The characters of some movies are made close to naturality that gives more success to them. A remake Jaanu Telugu movie belongs to that cadre. The characters shown in this movie give a good feeling that they are the real characters moving within our society. Vijay Sethupathi and Trisha acted as a hit pair in the led roles of Janaki and Ram in Tamil '96' movie. But in Telugu, these roles were enacted by Sharwanand and Samantha and major technicians of '96' film are involved in the remake film also. So whether the movie carried the same good feeling and success of "96' to know, movie lovers have to go and watch it on the silver screen only. 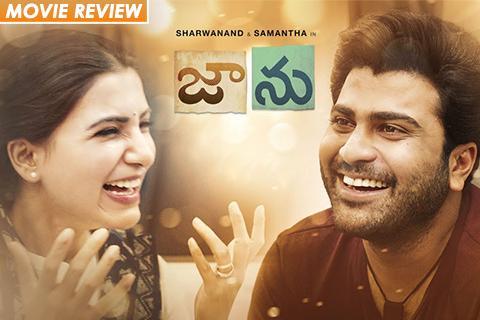 K. Rama Chandran (Sharwanand) a traveler photographer. During his journey as a photographer, he visited his childhood residing place and visited his old-time school. Ramachandran recollects his memorable first love incidences of which it took place long back in the same school. The various beautiful movements of his love with Janaki (Samantha) and their separation afterward appeared before his eyes again. After 17 years of their departure, Ramachandran with the help of his classmates has planned to arrange a get-together meeting in the school. Janaki (Samantha) also attends to this get-together along with all her friends. Jaanu (Janaki) has got married by that time but Ramachandran has not married as he is living in a dream world of her love. Why this loving pair departed after the tenth class? After 17 years, what were their beautiful feelings when they meet at a get-together party? In that get-together how the loving pair recollects the old good feelings of their love? What final decision do they take about their love in that get-together meeting? To know answers for all these questions one has to go to the theater to view it on the silver screen.

Analysis of the movie

When we watch the movie, we may generally get a feeling that we have already seen the same story in so many movies made on the base of love. Then what is the specialty of this movie? Here director C. Prem Kumar strikes some magic and tricks to attract the audience. He took a simple point of honesty in any first love and this delicacy of a beautiful feeling is maintained throughout the film. Director Premkumar was able to fully succeed in his efforts to bring the beautiful expressions of the lovers in every frame of the movie. Well experienced artists of the movie also helped the director to bring out the best on to the screen. The natural tender feelings between the love pair in the get-together party will definitely give a heart-touching feel to the spectators. In between the love scenes, natural comedy stuff is added also, which gives a good impression to the movie viewers.

Positives of the movie

Jaanu film has proved that there is no language barrier of any good story if it had good content in it. Director C. Premkumar has made apt changes to Tamil '96' movie to suit perfectly to the likings of Telugu nativity. He carried the soul's emotions of the original story into the Telugu version with utmost perfection. When it comes to the lead roles of the movie, Samantha (Jaanu) has excelled in her expressions, owning the character of the title role of the movie. She has not imitated Trisha of the original Tamil movie of whose role she played in the Telugu version. Sharwanand (Ramachandran) has also excelled and competed with Samantha in showing his expressions and feelings when they meet after 17 years in a get-together meeting. Vennela Kishore, Saranya, Pradeep, Tagubotu Kishore have created some space through their comedy for the audience in an otherwise heavy tragedy-based story. The same music hit pair Govind-Vasanth of Tamil version of '96' worked for Telugu movie also gave excellent background music but the songs in Telugu version lacked much-needed resonation. The cinematography of Mahendran is far on excellence with the narration of the movie. The overall movie gave a good impression to the spectators without any obscenity in the movie.

Slow narration of the movie, as the movie is based on 1996 times, is the main drawback to the movie. Some of the scenes gave a dragging impression and the dialogues appeared to be like in the serials of Doordarshan of 1996 times. The slow narration gave a boring feeling to the audience. Some audiences may feel the tragedy part of the second half may not suit their liking. If the audience prepares themselves to see a fresh movie unlike traditional happy ending movies of Telugu, then they will definitely like this movie.

Jaanu gives a different look to the otherwise happy ending Telugu movies in their story. With Samantha and Sharwanad's knockout performance, excellent background music, excellent handling of the screenplay and narration of director Premkumar definitely brings the audience to the theaters. My rating for this movie is 3 out of 5.