Theory of the experiment

Like any other organism, all parts of higher plant organisms respire aerobically. In this aerobic respiration, the glucose molecules present in the cells of all plant parts get oxidized by consuming oxygen from the atmosphere. Through this oxidization chemical step, the reserved glucose molecules of plant cells are broken down to release six carbon dioxide molecules, six water molecules, 38 ATP molecules energy and little heat energy. This chemical reaction can be represented in the form of chemical formula as follow:-

But certain cells of plant parts under abnormal conditions respire anaerobically temporarily for certain time for their survival. In anaerobic respiration, the cells of plant parts in the absence of oxygen where glucose molecules are partially broken down to release two ethyl alcohol or ethanol molecules, two carbon dioxide molecules, two ATP molecules, and little heat energy. This chemical reaction can be represented in the form of chemical formula as follow:-

So in anaerobic respiration only little energy is derived as glucose molecules are incompletely oxidized because of lack of oxygen.

To demonstrate germinating seeds can undergo anaerobic respiration i.e. they can respire even in the absence of oxygen and evolve carbon dioxide.

Requirements for the experiment 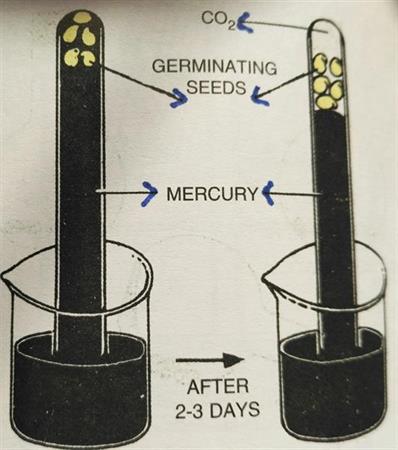 Procedure for the experiment

Take 8-10 healthy bean seeds or pea seeds and soak them in water for one day before using them in the experiment. Take two beakers and fill 3/4 of them with mercury liquid. Take two test tubes and fill them with mercury. Then make them stand in an inverted position in the mercury of beakers. Take few germinating bean seeds and peel off their seed coats. These seeds should be carefully introduced into the inverted test tube of the first setup by using forceps. In the second setup, boiled germinating seeds (dead) bean seeds are introduced into the inverted test tube containing mercury. As mercury is heavy in density than seeds, the seeds rise to the top of the test tubes in both cases. As the seeds were completely immersed in mercury liquid, the seeds are subjected to anaerobic conditions. The second setup acts as a control setup. The control setup is an experimental setup where one of the conditions for the experiment is missing. In the second setup, the dead boiled seeds were taken and they were not expected to respire. The two setups were left undisturbed for about two days.

Precautions to be taken for the above experiment

Here is another experiment on Respiration in Plants

The process of plant respiration: Significance, Types and Mechanism

This is a good experiment and can be attempted by the students to showcase the anaerobic respiration. Anaerobic respiration is the first reaction of seeds to the surroundings and underneath the soil, they exhibit similar characteristics and produce the basic environment in which a new plant can emerge. The plant will grow as per the heredity code in the seed and later become a great environment protector.