The liver is the largest gland of the human body weighing about 1.5 Kg. in adult and it covers 3.4% of the total body mass. It is a reddish-brown organ that lies beneath the upper right side of the diaphragm and partly overlaps the stomach. The liver is divided into two lobes- right and left lobes by the falciform ligament. The right lobe is further divided into the right lobe proper, quadrate lobe, and caudate lobe. The gall bladder is a pear-shaped structure is attached to the posterior surface of the liver by connective tissue. The right and left hepatic ducts join together to form a common duct called the common hepatic duct. The cystic duct of gall bladder joins a common hepatic duct, in turn, forms bile duct. Bile duct passes downwards and joins main pancreatic duct to form hepatopancreatic duct or ampulla of water. The hepatopancreatic duct opens into the duodenum and the opening is guarded by Sphincter of Oddi. Even though rats and horses are mammals they don't have a gall bladder. All the cells present in the liver are structurally identical and include numerous mitochondria and prominent Golgi apparatus in them. 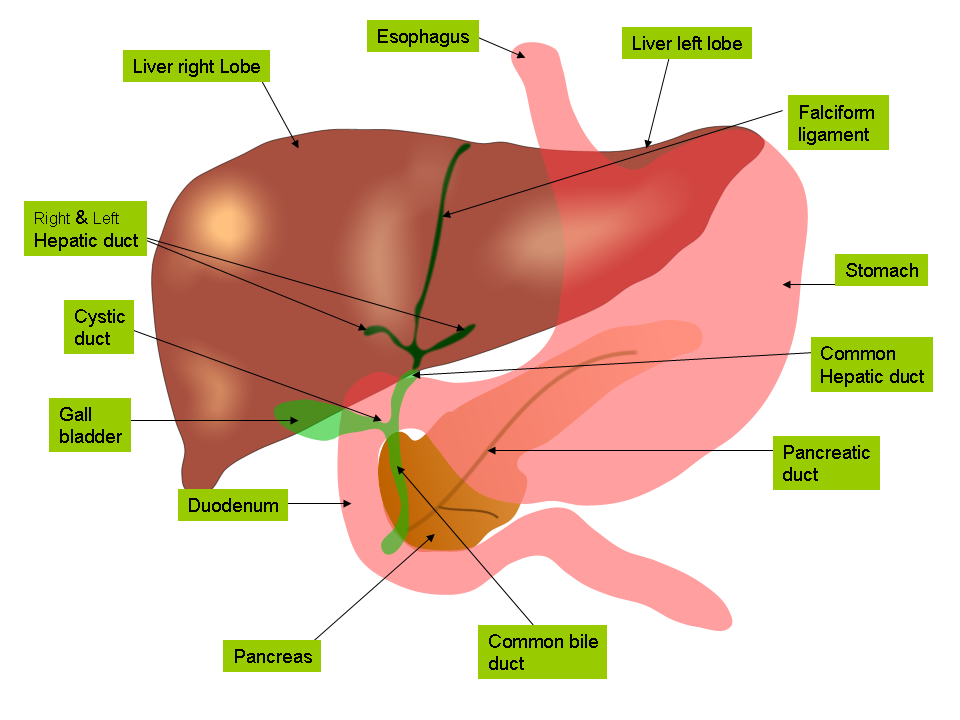 The liver has an excellent blood supply and it receives more blood per unit time than any other organ of the human body. Scientists estimated that one litre of blood gets circulated through the liver per minute. As the liver is the main metabolic centre of the human body, it is provided with a rich supply of blood. The liver can draw its raw materials from the blood to carry out its various metabolic activities and also shed its products into the blood. The liver derives its blood supply through two sources. They are
After the metabolism of nutrients in the liver, the liver sheds its end products like glucose, amino acids, lipids, urea, cholesterol, and carbon dioxide, etc. into the hepatic vein. Bile is another end product of metabolism of the liver that is shed into the gall bladder and finally enters into the duodenum through the hepatopancreatic duct.

Liver is the most metabolically active centre of the human body and it is associated with so many functional activities. The below description gives a glimpse of its most important functions in the human body.

1. Production and secretion of bile

Bile is a yellowish or reddish-brown coloured alkaline secretion produced in the liver and stored in the gall bladder. The ph of bile is 7-8.6 and bitter in taste. 500-1000 cc. of bile is secreted by liver per day. Bile is actually produced from dead RBC which are partially destroyed first in spleen and completely destroyed in the liver later. During the metabolism of haemoglobin in the liver, bile is produced. The bile contains two bile pigments bilirubin and biliverdin, and bile salts. The bile salts in bile juice are sodium taurocholate, sodium glycocholate, and sodium bicarbonate. Bile juice has no digestive enzymes in it but still, it helps in the digestion of food. Bile salts help in the emulsification of fats and also provide the alkaline medium for the action of pancreatic enzymes on the food. Thus, the liver is an important organ of digestive system.

After a meal the glucose level increases in the blood. The excess glucose in the blood will be removed by the liver and store it in the form of glycogen with the help of insulin. This metabolic step is known as glycogenesis. In between the meals if glucose concentration in the blood decrease, the glycogen present in the liver will be changed into glucose and it will be put into blood circulation to bring into normal concentration. Similarly, whenever the body needs glucose, the liver synthesizes glucose from amino acids, fatty acids, and glycerol. This metabolic step is known as glycogenolysis.

The liver produces RBC in the embryonal stage while destroys in the adult stage. Most of the proteins found in blood plasma like fibrinogen and prothrombin are produced in the liver. These proteins are essential for the clotting of blood.

Some of the bacteria present in the large intestine act on amino acids and produce poisonous chemical compounds. These substances then will be taken to the liver and were there rendered harmless. Cresol, carbolic acid and prussic acid produced by intestinal bacteria into nontoxic substances. Similarly, ammonia, a poisonous product produced during the metabolism of proteins will be made harmless by the liver by converting ammonia into urea. Thus, the liver provides a dependable clue for suspected reasons for food poisoning. So doctors test the liver first during post mortem in case of death through poisoning.

Due to intense metabolic activities of the liver, excess heat is released. This heat is distributed throughout the body by the blood. Thus, the body temperature is well maintained and regulated.

6. Storage of iron and vitamins

Here is a video on the Liver and its functions:-

Are you wondering about what kind of activities to plan for kids? Looking for helping children to build on hobby activities? Check this article to get a few ideas.

Importance of office and its activities

Do you want to know the importance of working in and office and the activities carried at the office? Check this article to know about such details.

A unique reality show based on the developmental activities

Reality shows are there in all channels. But a unique one was broadcast by Door-darsan Thiruvananthapuram Kendra. It was a contest about the developmental activities carried out in various Panchayaths in Kerala.

This resource contains details on summer camp in Ooty, near Bangalore. Here in this resource you will find the type of activities carried out at the camp and the timings of the camp.