Theory of the experiment

Breathing and respiration are two terms we often use them interchangeably. But these two terms do not mean the same. Breathing is a mechanical or physical process in which the exchange of gases occurs between the external and internal environment of the body. Respiration is a broader term that includes intake of air/oxygen and its utilization in body cells to produce energy. So, breathing is a part of respiration but not vice-versa. Breathing can also be called external respiration which involves an exchange of gases that occurs between the body and environment.

Breathing in humans includes two steps- Inspiration or Inhalation and Expiration or Exhalation. Inspiration is a step in which the intake of air containing more oxygen takes place. In expiration, air containing more carbon-dioxide will be expelled from inside the body to outside. The breathing process involves a pair of lungs, a muscular diaphragm, rib bones, external and internal intercostal muscles present between rib bones in the human body. In inspiration, the air containing more oxygen enters nostrils of the nose, nasal cavities, nasal chamber, pharynx, trachea, bronchi, bronchioles, and alveoli of lungs. From alveoli of lungs, the oxygen diffuses into blood capillaries and from there the oxygen will be carried by RBC and blood plasma to provide it to cells and tissues of the whole body. In expiration, the carbon-dioxide diffused by all the body cells into the blood will be carried by RBC and blood plasma to lungs from where it is diffused to outside.

To demonstrate the breathing process in humans through a prepared model.

Requirements for the construction of the model 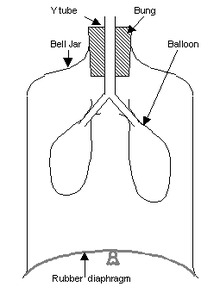 A Model prepared to show the Breathing Process in Humans (Courtesy:-wikipedia.org)

Construction of the model

A wide-mouthed glass bottle is taken and the bottom rim of the bottle is made removed neatly in a glass foundry. The mouth of the bottle is fitted with a single holed rubber cork. Now a Y-shaped glass tube (made in glass foundry) as shown in the above diagram is taken and two balloons were tied with the help of nylon strings to the Y ends of the glass tube. Now this Y-shaped glass tube with two balloons is fitted into one holed rubber cork in an inverted position. Then the rubber cork with Y-tube with balloons is tightly fitted to the mouth of the glass bottle as shown above. Now the bottom open end of the glass bottle is covered with a rubber sheet with the help of nylon string. Now the apparatus is ready for a demonstration of the breathing process. The students of the class together prepare this working model to study the breathing mechanism. Take the help of lab assistants for removing the bottom rim glass bottle and y-shaped glass tube. Students also can self prepare the working model to demonstrate breathing by taking some cheap and easily available materials like used plastic water bottles, using straws, balloons, etc. as shown in the below video.

Observations made while using the working model

When the diaphragm (rubber sheet arranged around the bottom of the bottle) is gently pushed in, the balloons (lungs) collapse and forces the inside air to pass out. This step is expiration.

Next, pull the rubber sheet (diaphragm) downwards then we observe the balloons get inflated as the air gets drawn into balloons from outside. Repeat the pushing and pulling of the rubber sheet a few times and we can see alternate collapsing and inflating of ballons which represent inspiration and expiration steps of breathing.

Precautions to be taken in constructing the working model


Also, learn about the experiment on how to demonstrate anaerobic respiration in plants

Here is a video showing how to make a model for demonstrating the breathing process in humans:-

This is a good model to explain the working of our lungs and their periodic inhalation and exhalation. There are many experiments which are used by the teachers and by the students in making their projects. I feel that we should include such experiments in large numbers so that the students can learn the subject with interest and in fact by engaging in such activities the skill levels of the students would also rise significantly.

I remember when I was in my school we were asked to put up a game or model in the annual school fare so that it could interest the visitors. We were not having any idea as what to do so we went to our teacher and asked him. At that time there was no internet facility and we had to depend on books only for projects and making some scientific games or amusements for showcasing it in such fares. Such books were also not easily available at that time. Our teacher told us to make a simple electric circuit using a long wire and to let the visitor move an ordinary metal key with a hole through it. We used a 9-volt battery and put an electric bell in the circuit. As the gap between the hole in key and the wire was small it would touch the wire and the bell would ring and the visitor would lose the round. That time this model attracted a lot of people and was appreciated also. Later we made a water clock also based on the changing water levels and its effect on a floating body connected to a clock needle through gears.

So what I want to emphasise is these are the skills we have to inculcate in the young minds so that their technical understanding of the things increases manifold and then only our education would be a skill-oriented one.

A very good article detailing the preparation of a working model to show the functioning of diaphragm. This model can be prepared by using waste material at your home. It is one of the simplest working models which can be used by a teacher to show the process of breathing and diaphragm. By using this model, a teacher can also differentiate between breathing and respiration as most of the students confuse between breathing and respiration. Breathing is a physical process and which can be shown by using this model but respiration is a biochemical process.

Many thanks to Mr. Ramakrishna Kambhampati for writing such a useful article for the students and teachers.