Right at the outset, I would like to compliment Mrunmayee Lagoo, who has co-written the screenplay with Anubhav Sinha, the director of the film Thappad (which means slap). The dialogues are spot on, and there are quite a few single-liners that stand out in the film, which have you nodding in agreement. The precise editing by Yasha Ramchandani is also to be complimented. The troika of the director, screenplay writer, and the editor come together to bring us one of the best opening scenes of a Bollywood film, where all the characters are introduced to us through something that we all enjoy - an ice-cream! It is here, as in other scenes, that the cameraman's artful skills, too, are to be appreciated. 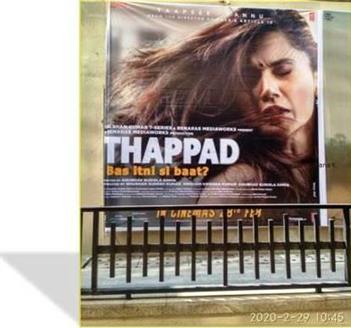 [Photo of the film poster taken by the author outside a cinema theatre.]

Those who have written a critique on the film Thappad have mainly focused on the core of the story, about the slap and whether it was correct for Amrita to file divorce proceedings on that ground alone. However, taking the by-line bas itni si baat (just a small thing), I would like to say that the film is not bas utni si baat (just that small thing). There are many more highlighted points to be appreciated in this very engrossing film.

If you haven't seen the movie as yet, then don't read this – it will be a spoiler alert!


The clichés in Thappad

Let's consider the cliché first. The director has deliberately put in the clichéd scenes and dialogues to bring out what women are generally so attuned to, that they lose out on their individuality. There is the cliché about the woman expected to take care of her hubby and his family members. From switching off Vikram's phone alarm and bringing him breakfast in bed to checking the blood sugar level of her mother-in-law, those scenes are playing out in many homes. There is the connected cliché about women being conditioned by their mothers (and their mothers before them) to be responsible for their homes first and curb any wishes they have of taking up something that interests them if that "interferes" in their being homemakers and caretakers. It is not just those clichés that pop up, though.

There is a scene where after the incident, a glass of water is offered to Amrita. This is a cliché because isn't that what we do when something major happens, whether an accidental fall or a sudden death? In the scene, it is just an automatic, ingrained gesture, as though the glass of water will be soothing or calming.

There is the cliché about trying to get back to routine, putting back trinkets on the top shelf, shifting the sofa to where it was, making the morning tea, as usual, re-making the bed, etc all done in automation. Yes, it is done automatically earlier too, but after the incident, you can feel what Amrita feels.

The lack of empathy in Thappad

Talking about the attempt to soothe, take the scene in the early part of the film where Amrita burns her finger after making a paratha for breakfast for her husband, Vikram. He immediately calls out to the maid Sunita to bring ice to soothe her finger. But after the incident of the slap, leave aside the fact that he does not apologize, he does not even so much as show any remorse for it, only putting to the front and center all thoughts of his expected hopes of a promotion and a trip to London being scuttled.

There is an equal lack of empathy from the mother-in-law. Right after the incident, she tells Amrita that it is "Ghar ki baat" (a family matter) and that the guests are waiting, but says nothing about what happened. Then there is the brilliant scene where, as usual, Amrita removes the kit for checking the blood sugar and looks at her mother-in-law poignantly, expectantly waiting for her support. In that moment of silence, you silently urge the mother-in-law to say something about her son being wrong. That single moment of silence hovers breathlessly, gone in a second, when all she does is to extend her finger to get it pricked for testing. Brilliant scene because it was shot for the duration which was required, not a minute more, encompassing in a concise way of time and motion what was needed to be conveyed.


The father-daughter relationship in Thappad

There is something between a father and a daughter that is hard to describe, an emotional connect that just cannot be explained as easily as the one between a mother and daughter, a mother and son, and a father and a son. That relationship is brought out so remarkably well in this film. It is a relationship of quiet understanding, of the father knowing exactly what Amrita felt when she was slapped. There is also that part in the film of the father not being preachy or being judgemental, asking only when asked by Amrita whether she is doing the right thing, "What does your heart say? Do you feel it deep inside?"

The slap in Thappad

Having seen the trailer and/or knowing the storyline, you know there is a slap. Yet, when that scene comes, it still is so sudden and impactful that it stuns. It is a very well shot scene, with the dialogues building up to that moment when Amrita gets slapped. The stunned, shocked, hurtful expression and one of disbelief on Amrita's face right after, the camera slowly panning everyone's faces, the mother's questioning-look, others look of puzzlement as Amrita walks past, unheeding…lovely camerawork!

In conclusion, a word about the cast of the film Thappad – superb casting all-round, though I was not really impressed by Maya Sarao in the role of the lawyer Nethra and Naina Grewal in the role of Swati. Geetika Vidya Ohlyan as the maid Sunita was the stand-out other than Kumud Mishra in the role of Amrita's father. Later, thinking over the film scenes, I had an imaginative thought about the reversal of the actors, with Taapsee reprising the role of the maid and Geetika as Amrita! It is hoped that Geetika does not get typecast in similar roles and we'll get to see more of her in prominent roles.

Although the much-anticipated Baaghi 3 starring Tiger Shroff has grabbed the showtimes in most theatres this weekend, the movie Thappad is still having a screening in some of them. We should encourage such movies, so don't miss it! It's not just an ordinary film.

A piece of footer advice: don't get up when the credits roll; there are some scenes at that time which you should not miss.

I have also interest in writing movie reviews and from that angle, I appreciate the author for bringing out a very good review of the movie Thappad which is definitely well crafted and well presented by the director Anubhav Sinha.

There are many Hindi movies which have depicted the human relations and sentiments with fine details and expressions and Thappad can be considered as one in that class. I remember some earlier Hindi movies like Kora Kagaz, Paheli, Aap ki Kasam, Arth, Shadi Ke Side Effects, Dum Laga Ke Haisha etc where such fine emotions were portrayed by the respective directors. In such films to bring the written sentiments on screen is a very challenging task but good directors have a capability to do so and then such pictures win the heart of the audience also.