Anatomy of stem includes the internal organization of various tissues in a specific way. Epidermis, hypodermis, ground tissues (Parenchyma, Collenchyma, Sclerenchyma), vascular tissues (Xylem and Phloem) are tissues we can find in the anatomical structure of a typical dicot stem. To study the anatomical structure, a thin T.S. of a Sunflower stem (Helianthus annuus) or Coat buttons (Tridax procumbens) is taken and observed under the low power of Compound microscope. The following description reveals the specific arrangement of various tissues in general of any dicot stem.

A T.S. of a young dicot stem of Sunflower (Helianthus annuus) shows the following arrangement of tissues from the periphery towards the center. 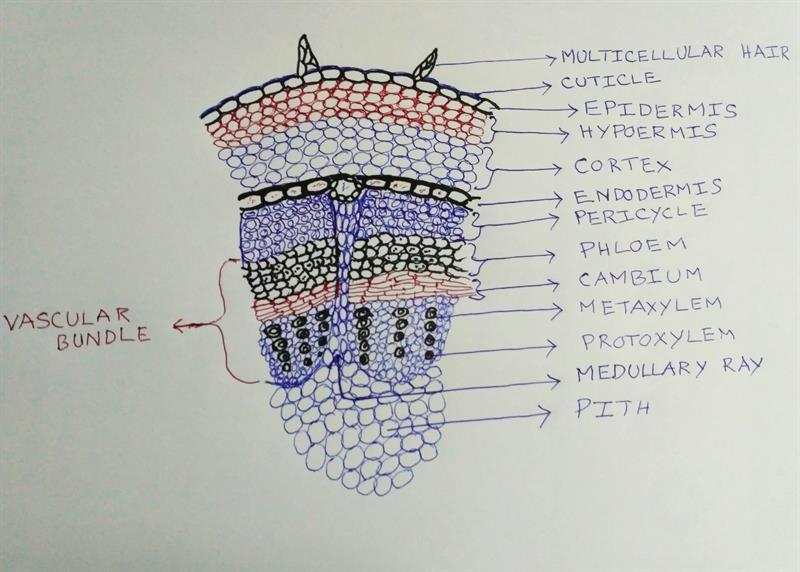 It is the outermost single-layered structure present around the stem consisting of small flattened living cells that are closely packed. The cells often possess chloroplasts and are covered by a distinct cuticle. Here and there some stomata also can be seen on this layer. Some of the cells in the epidermal layer include multicellular stem hairs. These stem hairs prevent excessive transpiration from the stem.

Next to epidermal layer, cortex tissue is present. In the dicot stem, cortex tissue can be divisible into three distinct regions. They are Hypodermis, General Cortex, and Endodermis.

It is the innermost region to the cortex that consists of Pericycle, Vascular Bundles and Pith.

The following are the typical identifying features of dicot stem for a practical purpose:-


Here is an article on Anatomy of Monocot leaf