When we do our shopping, we now notice a dramatic transformation. There are the likes of Bigbasket, Amazon, Flipkart, and others who are now catching up with online retail in a big way and disrupting the Kirana guys, more so, in the metro cities. On the other hand, the Kirana retailers now have a double whammy in the form of two giants -- Big Bazaar and Reliance. They are not spending sleepless nights in the smaller towns and villages, where the last-mile delivery is still an issue for the bigger players.

Be that as it may, it turns out that we need a conceptual framework to contextualize such trends and learning. Peter Fisk, in his book on "Marketing genius" provides such a framework. We will examine this framework and some quotes from the same book and then extrapolate the concepts in the light of practical inputs from published sources. Here is the conceptual framework from the book, "Marketing Genius". by Peter Fisk( page 173) 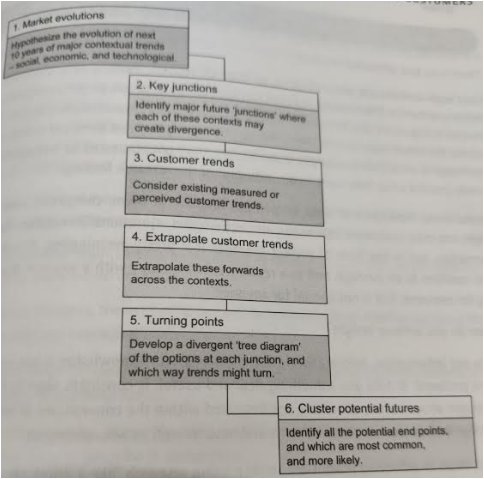 We will first examine each step as explained in the aforesaid diagram. The six major steps that we will discuss are a) Market Revolutions b) Key Junctions c) Customer Focus d) Extrapolate customer trends e) Turning points and f) Cluster potential futures

Everything in business, particularly retail, is based on a hypothesis. With the available data and also existing trends, the major players always predict what will happen in the market and then plan their strategies. According to experts, the modern organized retail is still evolving in India and high rentals cost up to over 10% of the total expenditure of organized retail formats. Here is one vital statistics about organized retail - "Of the Rs.40 trillion Indian retail market, only 9% is organized. Furthermore, the penetration of the organized market in the food and grocery segment is even lower (Rs.24 trillion), which dominates the retail market, is even lower, at 3%" (Outlook Business,18th January 2019, page 42).

Hence, the Indian retail market is still evolving. Even the big players like Reliance Retail, Big Bazaar of Kishore Biyani and More from the Aditya Birla group are struggling to make it big on profits. The wages paid to employees, apart from high rents, are higher than the Kirana stores. In the latter, the labor costs are zero since a single-family manages it and supply-chain efficiencies in smaller places are localized and far more efficient, particularly in groceries.

This is one aspect that needs a bit of explanation. Take technological advances. Computerized billing is now being attempted by the smallest of Kirana traders even in semi-urban areas. He has also personalized delivery mechanisms. He can deliver even at 11 p.m. on special requests of customers. This is the "divergence" number one.

The "divergence" number two is the moves of Amazon to cooperate with the local Kirana traders and enter the market. This is co-operation and not competition. The Kirana trader becomes a partner of Amazon though he continues his physical trading with customers. However, even Amazon cannot reach very small villages and the Kirana shops situated within villages with a population of around ten thousand. Even the items stocked in such grocery shops are totally unique and localized. This can be "divergence" to any organized player( Amazon and Flipkart are into this game).

The text given in the conceptual diagram reads "Consider existing measured or perceived customer trends". The FBB is the fast fashion vehicle of the Future Retail group of Kishore Biyani. It has a consumer insights team and this team is bang on target. Consider this quote "We probed a little more and based on our own information from customer buying patterns, we realized that we could sell at least 2 million pieces. We filled the stores and eventually managed to sell 2.8 million pieces to the customer" ( Outlook Business, 8th December 2017, page 59. The same article on the same page has it on record that in 2017, FBB sold 200 million garments a year and the Management expected a three-fold increase in four years' time (by end 2021).

This is one classic example of Customer Focus. However, everything is still a work in progress. The learning curve is big in a highly heterogeneous market. However, Future Retail is also a high debt organization. It remains to be seen how quickly Kishore Biyani is able to manage his debt.

A FICCI-PwC report published in 2014 had this to say about the Kirana stores in India. "Modern trade has expanded dramatically, but the classical, traditional Kirana and convenience outlets have grown, modernized and become self-service outlets, to do remarkably well" (Business India, October 13-26, 2014, page 42.)

Cut to 2020. The picture remains very much the same. Take the Vellore and Ranipet districts of Tamil Nadu. Each and every town in these two districts have at least three or four "touch and feel" and then buy small departmental stores. Sholinghur, a fairly big town in Raniper district, has three major such department stores. Each of them is computerized. Locals are employed at extremely cheap wages.

Cut to Ranipet itself. It has at least two, and Walajahpet, another two or three. The list goes on. They have home deliveries and happily deliver to regular customers. For instance, if a particular customer wants only Guntur red chilies (the Andhra Pradesh border is just fifty kilometers from most towns and have a huge Telugu population settled in these towns), the retailer will deliver the same in three days flat. I have personal knowledge of these shops and can vouch for this kind of personalized service. Furthermore, they stock many local brands and these are out of the purview of the organized players. None has even attempted home deliveries as yet (Amazon is not present in these markets as yet).

Well, the story will continue. The road network is horrible in the Hindi-speaking States in rural areas. It is difficult to imagine how the big players - both brick and mortar and online - can ever replace the Kirana shops in India. And they are still just around 10 to 11 percent of the total retail market in India.

The text says "develop a divergent "tree diagram" of the options at each junction, and which way the trends might turn". I have made a tree diagram, using all the available data for depicting the present reality and the scenarios that are likely to emerge in the near future. It is very obvious that the traditional formats will co-exist with the newer forms of competition from the online players. However, since the Kirana traders have now started home deliveries in a big way, they will always be on the radar screen of the big online players like Amazon who will make the former business partners, in their last-mile connectivity> This will further expand their supply chain effectiveness in both the short and long run. 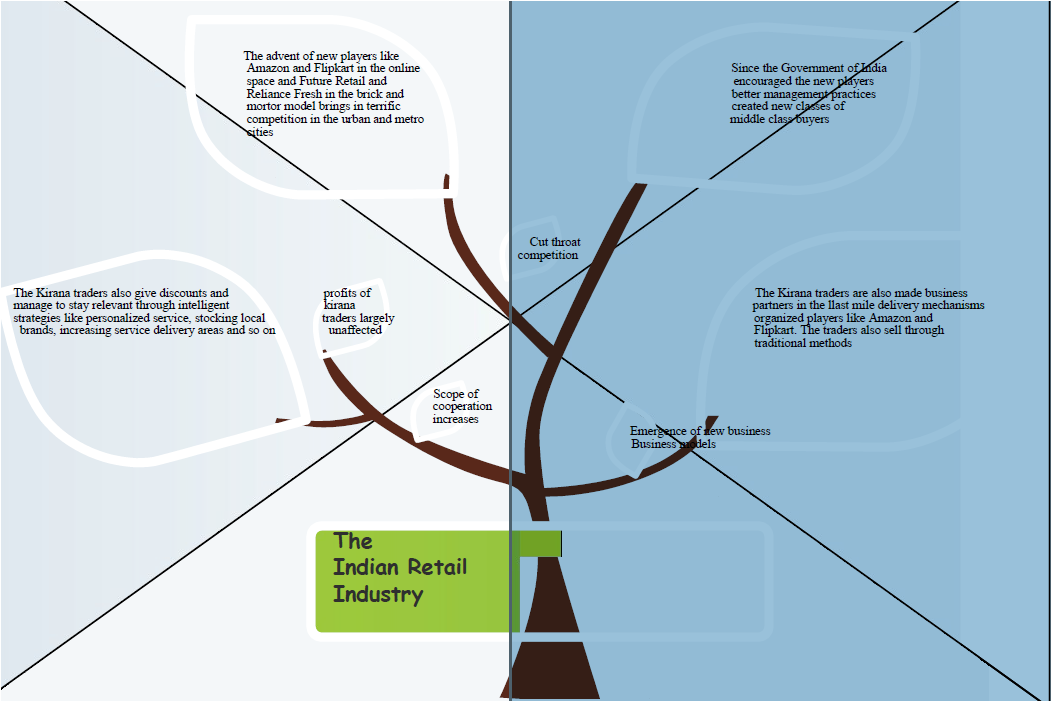 The text in the diagram says "Identify all the potential endpoints and which are most common and more likely". So here are some vital endpoints about the realities of the Indian retail industry-

A vast and heterogeneous industry

The Indian retail industry is a vast and heterogeneous one; the smaller players, with far lesser overheads, will continue to survive as their profit margins will be more. Local cooldrinks with small branding and word of mouth publicity in Tamil Nadu, that sell mostly through small Kirana shops is the best example.

Debts could weigh down big players

The big players will continue to make profits, but their debts will cause severe problems. Hence, their wafer-thin margins cannot, as a rule, enable them to make highly ambitious expansion plans, pan-India. This is a potential endpoint, at least until the year 2030.

Big Fight between the Big four

It will be a big fight between the big four, who will innovate to stay relevant and alive. The big four are Amazon.com, Flipkart ( part of Walmart now), Reliance and Future Retail of the Kishore Biyani group. However, this fight is still urban-centered. Last-mile delivery problems will really prove a big problem for any big organized retail player.

Presence of several many formats to continue

The local Kirana traders will continue to innovate and distribute so many local brands. The partnership between the former and the latter will continue forever in India, as the lower middle classes tend to lap up such products at any point in time. ( pickles in South India is a typical example). Hence, the customers will be served through many formats and this will continue, as the Kirana stores are present everywhere in India and service small villages with a population of under five thousand people.

Certain realistic data taken from published sources have been taken to draw up a snapshot of the Indian retail industry with specific reference to Customer Foresight, in the light of the conceptual framework from the book "Marketing Genius" by Peter Fisk. It should be noted that the Indian retail industry is always a work in progress. It has the big players and the millions of Kirana shops as well. How the competition will play out in the coming years will be even more interesting. We can even revisit the same conceptual framework to understand the nuances of the then prevailing realities, five or ten years down the line.