Shirdi is a holy place located in Ahmednagar district of Maharashtra. It is 88 Km. away from Nashik, 300 Km. from Mumbai and 600 Km. away from Hyderabad. This is the place where Sai Baba lived for over 50 years. Shri Sai Baba first appeared under a Neem tree when he was 16 years old. From that time onward he started enlightening people with his wit and wisdom. Sai Baba used to serve the poorest of the poor and he sacrificed his entire life for them. Thousands of people from every corner of India and every day used to visit him in Shirdi at that time to get his blessings. People used to believe him as an avatar of God. This great saint used to utter the words 'Sabka Malik Ek' in front of his devotees and used to preach them universal integrity, peace, universal truth of God of all religions. Shri Sai Baba attained eternal bliss in the year 1918. One of his staunch devotees of Shri Sai Baba, Mr.Gopalrao built the present temple in the year 1922. The mortal remains of Shri Sai Baba were kept under the Samadhi. The entire temple was constructed with white marble stone. Six hundred people at a time can carry prayers inside the temple. Devotees can have a darshan of Samadhi from 5 AM till 10 PM every day.

Things to know before visiting this Pilgrim place

This temple is located in Shirdi, a small village of Ahmednagar district of Maharashtra. It is the holy place for lakhs of devotees to pray and take the blessings of one of the greatest saints of India who was believed to be the incarnation of God by them. It is the place where the mortal remains of Shri Sai Baba were preserved under the Samadhi. This Mandir is located in a temple complex that spread in around 200 meters. The Mandir was made with white marble and the Samadhi situated between two silver pillars that were decoratively designed. A life-size marble idol of Baba was placed over the Samadhi was ardently prayed by the devotees who visit the temple. A large hall in front of the Samadhi is the place where the devotees stand and pray. Aarti timings are the best timings to visit the Mandir as the devotees can spend half an hour at Shri Sai Samadhi. Kakad Aarti timing 4.00 AM - 5 AM, mid Day Aarti from 12 PM to 12.30 PM, evening aarti from 6.30 PM to 7.00 PM and Shej Aarti from 10.30 PM to 11.00 PM. The visiting timings for the temple are from 4 AM. to 10 PM.

A small house located close to Dwarakamai is known as chavadi. Shri Baba used to live in a mosque located in Dwarakamai. At one time during monsoon, water entered into the mosque that forced him to vacate from that place. His devotees shifted him to Chavadi and in that place, on alternate days he used to reside. It is the house where Shri Sai Baba used to reside at that time. The wooden cot and the White chair used by Baba can be seen here. Even today the practice of carrying Baba from Dwarakamai to Chavadi on Thursday in the procession is followed there without fail.

At the entrance on the right side of Shirdi temple, there is a mosque called Dwarakamai. It is the place Where Shri Sai Baba spent most of his time till the end of his life. He first came to this place along with a marriage procession. He used to lit here oil lamps every day in the evening. Here he used to solve problems of the people, cure sick people and take away the worries of his devotees. Here Shri Sai Baba's oil portrait, a big stone where Sai Baba used to sit every day and a palanquin used by him can be seen.

It is located 14 Km. away from the main town of Shirdi. It is a place situated under a big Neem tree. Shri Sai Baba first appeared under this Neem tree only when he was 16 years old. In 1941 the Gurusthan was renovated where a small shrine was built. On the elevated place of this temple, a big marble portrait of Sai Baba situated. In front of the portrait, a Shivling and Nandi can be seen. Photographs of 12 Jyotirlingas are also can be seen in this temple.

It is located just 600 ms. away from Shirdi Bus stand. It exactly situated on Ahmednagar - Kopergaon Road in Shirdi. The presiding deity Khandoba, another form of Lord Shiva. Lord Sai Baba and Mahalsapati's idols also can be seen in this temple. Actually, when Sai Baba came to Shirdi for the first time he halted at this temple for some time and the priest Mahalsapati. Thus this temple got much historical importance.

It is located northwest of Sai Baba Samadhi Mandir. This park was actually developed by Sai Baba along with the help of people. First, he planted two main trees- one Neem tree and one Peepal tree. Later he turned this place into a beautiful flourishing garden. He used to undergo meditation by sitting between the two trees. He used to visit this park regularly in the morning and evening to keep water for the plant. Sai Baba lighted a lamp that was destined to burn perpetually. This lamp is popularly known to Nanda Deep is still burning bright even today. 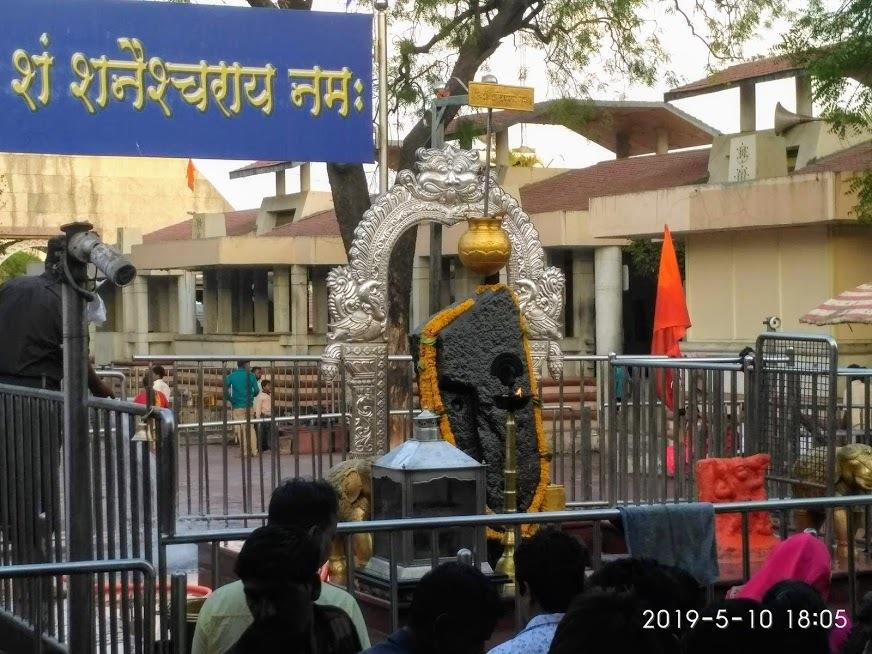 It is a small village located at 73 Km. away from Shirdi. In this village, we can find a famous ancient Shani temple. People who visit Shirdi always visit this temple to get the blessings of Lord Shani. People of this village never have doors for their houses as they have a great belief that Lord Shani will punish heavily if thieves try to steal anything. The self-evolved deity Lord Shani Dev can be seen in the form of a black stone in an open place. People believe that Lord Shani in this temple originated at the start of Kaliyug. A trident Trishul can be seen along the side of Lord Shani and Nandi and Shiva images can also be seen besides Lord Shani. Devotees can break coconuts in front of the temple by themselves. Devotees are allowed to carry 'Tilabhishekam' with Sesame oil to get the blessings of Lord Shani.

A very nice article by the author. Most of the information about Sai Baba comes from Sri Govindrao Raghunath Dabholkar's book 'Sri Sai Satcharitra'. He was a great saint who has given knowledge of humanity to the world.
It is believed that Sai Baba was born in Pathri village in Maharashtra, a part of the Hyderabad Nizamshahi. But with the passage of time when the province of the country was divided on a linguistic basis, this part came to be a part of Maharashtra. There is a belief that the Pandavas performed Ashwamedha Yagna here and Arjuna was present here with his army and since Arjuna is also called Parth, this village came to known as Pathri.