Nashik city is located in Maharashtra State of India. As Nashik is famous for the growth of Vine twines, this city is popularly known as 'Vine City'. Nashik got religious prominence because, in the epic Ramayana, it was mentioned that Lord Sriram spent his 14 years of exile period in this place. This place got its name Nashik (In Sanskrit Nashik means 'nose') because of Lakshmana cut the nose of the demon Soorpanakha here in this place. Mahakavi Kalidas and Valmiki mentioned about Nashik in their scriptures. Tourists who visit Shirdi can definitely visit Nashik because it is present very close to Shirdi. Here below the details of the various important religious places and the sacred temples were discussed. It is recommended before visiting Nashik one can visit Shirdi as it is very close to Nashik.

This temple is just 30 Km. away from Nashik city and is located in a small town called Trimbak. The river Godavari originates from Brahmagiri hills and these hills are closely located to this temple. The water from Brahmagiri hills flows underground and bathes the Shivalinga in this temple is a very interesting feature to observe. This holy shrine is one of the 12 jyotirlingas of Lord Shiva. The amazing feature of this jyotirlinga is the deity here appears with the three faces of Lord Vishnu, Lord Brahma, and Lord Shiva. The Tridev was covered with a golden crown beautified with diamonds, emerald, and precious stones. This temple was believed to be originated from Pandavas time. The temple gives a beautiful look as it is built with black stone. The slokas of Bhagavadgita were beautifully sculptured on the walls of this temple. The pillars of this temple are beautifully carved with floral designs. In architectural and sculptural aspects the temple has reached its peak in temple architecture in India. Kumbh Mela takes place once every 12 years in the close vicinity of this temple. The timings to visit this temple is from 6 AM to 9 PM. 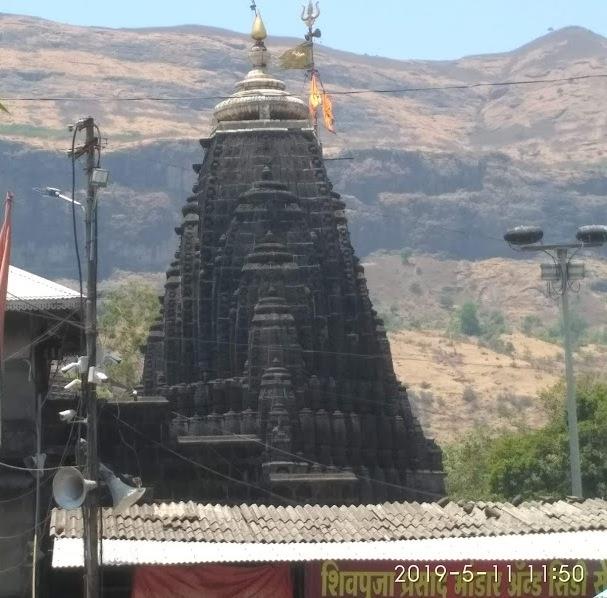 Panchavati is located 5 Km. away from Nashik city and can be reached on an auto or taxi. This place is known as Panchavati as five (Panch) very big Banyan trees (vat) can be seen in a row in this region. Very close to the first Banyan tree, Sita Guha is located where Sita, Rama, and Lakshmana resided during 14 years of their exile period. Inside the temple, we can find a very narrow Guha of the height of 2.5 feet. Devotees who want to visit this Guha has to bend their body and has to move down the small steps through the cave. Below the Guha, we can find two small spaces. In one space we can find idols Rama, Sita, and Lakshmana. In the other space of Guha, we can find Shivling. After darshan devotees have to come back through another side of the cave by climbing up steps. It is quite a thrilling experience for the devotees to visit this most ancient sacred Guha. Opposite to Sita Guha, we can find a beautiful Art Gallery where the important events of the epic Ramayana were displayed in a life touching manner. Tourists shouldn't miss visiting this Art Gallery. The timings to visit Sita Guha is 6 AM to 9 PM. 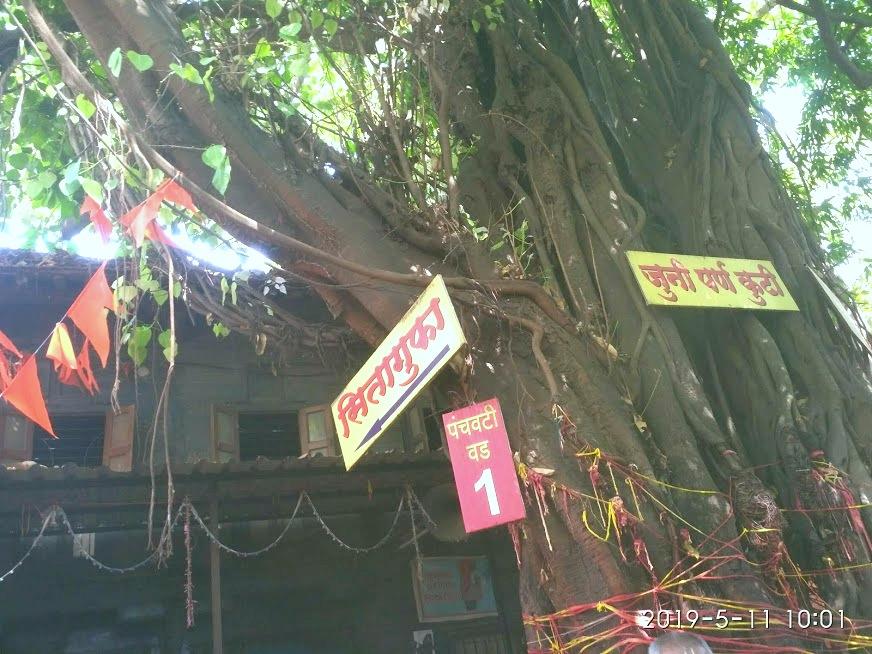 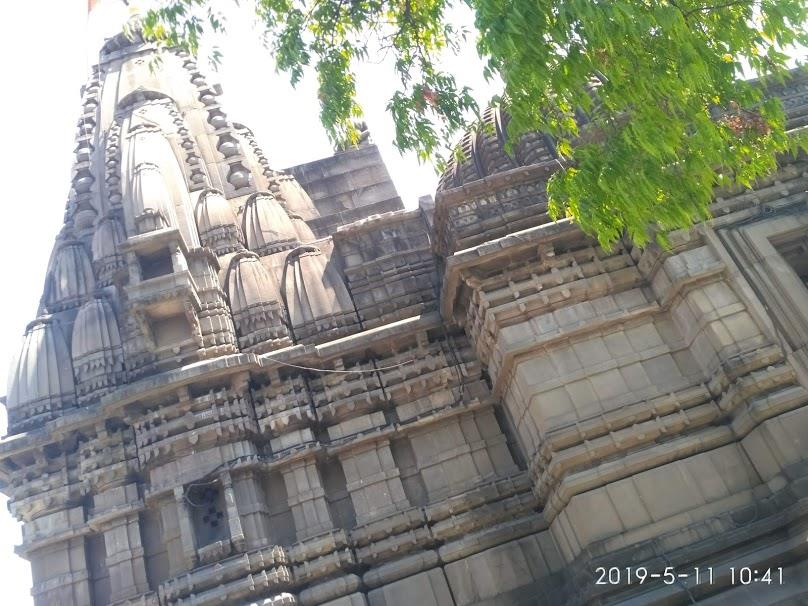 It is situated along the banks of the sacred Godavari river. It is located at 2 Km. away from the Central Bus stand of Nashik city. Ancient scripts say this is the holiest place in the Godavari where Lord Rama used to take bath during the exile period and also where he spent time along with Sita and Lakshmana in nearby Panchavati. He also gave tarpana to his demised father in Ramkund. Thus this place of Godavari became so sacred to people of Hindu religion. So people also take a bath, give tarpana to their demised elders and immerse ashes of the dead persons. The remains of great personalities of India were usually immersed here. Sri Neelakanteswara Mandir, Sri Mukhya Pracheen Godavari Temple, Sri Naroshankar Temple, Sadguru Gajanan Maharaj Temple are the ancient temples located on the bank of Godavari river (Ramkund).

These are ancient rock-cut caves located 8 Km. away from Nashik city of Maharashtra state. These caves are also known as Pandu caves or Nashik caves. They belong to the 3rd century B.C. located on Trivashmi Hills. These are a group of 24 caves that are related to Hinayana Buddhism. These caves were built by ancient Jain kings. They were used to live here in these caves. In the caves, we can find inscriptions of Jain religion and Buddha sculptures. It was believed that the disciples used to meet religious gurus in these caves. Inside the caves, we can find amazing sculptures, stone-built water tanks, chambers, and stone ladders. At the foot of these caves, we can find Dada Saheb Phalke Smarak. If we climb up to the top of the caves, we can have a beautiful view of the entire locality around the caves. Timings to visit this place is 8:00 AM - 6:00 PM.

It is a worth seeing site in Nashik tourism for tourists. Indian Institute of Research in Numismatic Studies established this Museum in the year 1980 for research purposes. This museum has a vast collection of coins that belonged to different ages. This museum arranged all its collections in a beautifully arranged evolutionary pattern that gives an idea of the Indian currency system. This museum regularly organizes workshops for those who are interested in coin collections. Timings to visit this place 9:30 AM -1:00 PM and 2:00 PM - 5:30 PM on all weekdays but closed on Sunday.

This waterfalls is located 9 Km. away from Nashik city in Someswar. These waterfalls are also popularly known as Someswara waterfalls. These small waterfalls that fall from a height of 10 mt. and that have their origin from river Godavari. This region gives an amazing picturesque look during monsoon season as it has huge water flow from waterfalls. The surrounding greenery makes this region look so wonderful. On the way, one can visit the ancient Someswara temple and Balaji temple. The visiting time for the waterfalls is 6 AM to 6 PM.

It is located 60km. from Nashik city near Nanduri village. At an altitude of 1,230 mt., the temple is located on a hill cliff. The temple is dedicated to the Goddess Saptashrungi. The presiding deity of this temple is Mahishasur Mardini who killed the demon Mahishasur can be seen here. The temple is referred to as one of the 'three and a half Shakti Peethas' of Maharashtra as well as one among the 51 Shakti Peethas in India. It is believed that the right arm of Sati's have fallen on this hill where the temple has originated. The Devi situated on the top floor of the two-storied temple. The self-manifested idol of Goddess was beautifully carved on a rock of the mountain. She is surrounded by Sapta means seven and Shrungi means Peaks. The Devi's image is as huge as 10 feet tall with 18 hands holding various different weapons. The idol is always coated with red Sindhoor and decorated with a crown, nose ring, and necklaces. To reach the temple one has to climb up 570 steps from below the hill. There is also a trolley system to carry the devotees to the temple situated on the cliff of the hill. The visiting times to visit this temple is 6:00 AM to 6:00 PM.

Anjaneri is located 20 km away from Nasik by Trimbak Road. It is one of the forts in the mountain range of Nashik-Trimbakeshwar. It is the birthplace of God Hanuma. On a small plateau of this hill, we can find a temple called Hanuman Mandir. In this temple, we can find a large statue of Lord Bala Hanuman with folded hands sitting in front of Anjani Mata. It is the only temple where Anjani Mata can be seen in the Hanuman temple. Anjaneri hills are also famous for trekking. 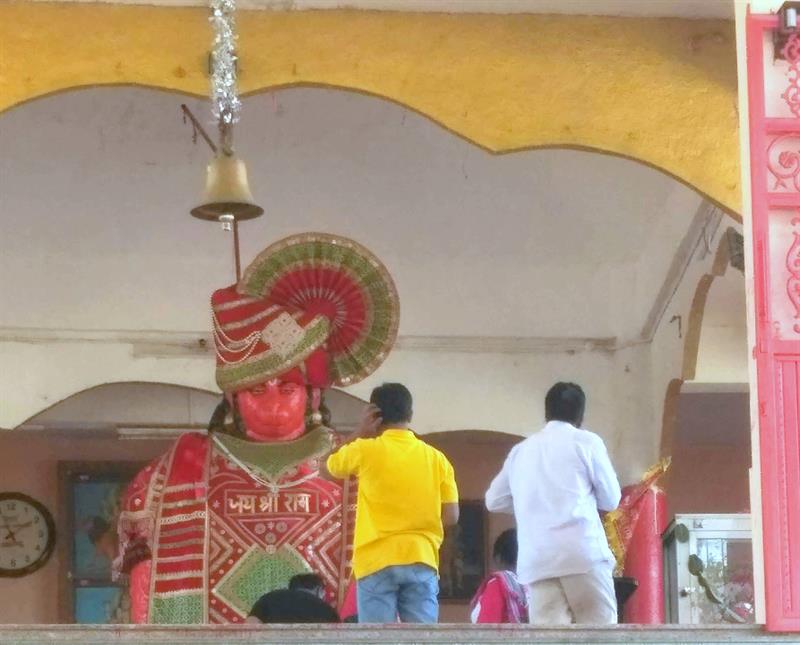 The author has provided a lot of detailed information about Nashik, which is commendable. Being a religious city, many ancient temples exist in this city. Igatpuri is a beautiful hill station in Nashik district, popular for its dense forests and natural beauty. Khodala is also a beautiful village nearby, being built on a hill and surrounded by lush green forests and a very nice place for a picnics and trekking.