How and when did life originate has been a question for man since prehistoric times? Present living organisms comprised of a wide range of plants and animals. All these organisms show a remarkable diversity in their shape, size and functions. Yet, a fundamental similarity exists among them. Such as all living beings are made up of the same elements, they have cells as their structural and functional units and DNA is the hereditary material in all of them. From these similarities, it appears that all the organisms might have evolved from some common ancestor. The study of the condition and the mechanism involved in the creation of primitive life on our earth is the study of the origin of life.

Theories of origin of life

The different theories proposed to explain the origin of life on the earth are as follows.

The theory of eternity suggests the unchangeable characteristics of the universe. The organisms have existed and will remain to exist in the same form, unaltered till eternity. Hutton said that there is neither a beginning nor an end to this world. This theory has no scientific support and since long discarded.

As per Christian mythology and as given by a Spanish monk, Father Sudrez, the world was created in six days. God created earth and heaven on the first day and sky on the second day. On third day, earth surface was covered with plants and animals. On the fourth day, God created the sun, moon and stars. The birds and fishes appeared on the fifth day and finally, man and beasts were created on the sixth day of creation. On the seventh day, a woman was created from the 12th rib of man.

Theory of panspermia or Cosmozoic theory

According to this theory, life existed somewhere in the universe in the form of spores name cosmozoa. These cosmozoa have reached the earth accidentally from some other planet of the solar system. On getting favourable conditions of life, they developed into organisms. Recently H.F.C. Crick in his book has also written that life on earth could have originated elsewhere in our galaxy and probably reached here accidentally.

Theory of spontaneous generation or Abiogenesis

Till the end of the seventeenth century, people believed in abiogenesis or in spontaneous generation of living things from non-living things. This theory was proposed by Anaximander and Aristotle. Van Helmont described the production of mice from wheat grains and soiled clothes kept in a pot for 21 days.

In 1747, Joseph Needham demonstrated the spontaneous origin of minute living organisms in the infusion, which he boiled for a few minutes in a corked flask. 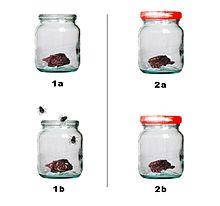 Maggots appeared in the uncovered jar, but not in covered jars, when observed after a few days. Plenty of flies were seen sitting and laying eggs on the muslin cloth, the covering of the second jar but no maggots appeared in the fish inside. From these observations, Redi concluded that flies arose from the eggs by the parent flies, the maggot could not have come into existence spontaneously. Abbe Spallanzani also confined the views of Redi. Thus with the help of this experiment, Redi proved biogenesis theory, i.e. life arises from pre-existing life. But Redi couldn't explain how the first cell or organism was formed on the earth?

How to Prrotect Earth From Global Warming

Stop Global Warming, this the word we usually say. But, did any of us think that how to stop this warming. The best way the one can do is planting trees. The following resource will Explain the precautions to be taken before planting the trees to save earth from global warming.

Origin of life is a great riddle for mankind and though there are various theories none could explain it clearly and convincingly. The main difficulty is to explain how the first living form, even if it was a single-cell, came into existence. Whether it was eternally there or was created by some accidental incident in nature where some chemicals in a special condition gave rise to the miraculous life form which later could evolve in all possible forms ranging from ants to dinosaurs. This puzzle of the conversion of dead material to life form is the greatest of all the mysteries of nature and once it is found many concepts would change in the human society and belief patterns. It is also strange to note that out of so many animal species only the human being rose to such high levels of consciousness that they are able to study such difficult matters with the help of their advanced brains and logical faculties. Some scientists believe that humans would one day unravel most of the mysteries of nature by this sheer force of consciousness that nature has provided to them. Let us see how scientific progress makes headway in this unexplored and dark direction. Seeing the phenomenal progress of science in the past few centuries this does not appear an impossible task but the only thing is that such deductions take their own time due to higher difficulty level and complexities.

Though we read many stories about the origin of the earth and the existence of life, we are not able to get convinced for obvious reasons as we always felt seeing is believing. How and when did life originate has been a question for us and that needs to get the right answer. The doubt always starts as to how the first living being has been formed and here arises all the doubts that cannot be cleared by just reading the books or history about the earth. Modern science has been successful in digging the past and getting us the latest details about the past happenings, and for the layman who was away from the science and the happenings, the things during the past is the mystery to which he cannot get convinced and feels that some supernatural powers are guiding and taking this earth to the other level and the living organisms are a gifted lot.