There are some concepts in marketing that can be easily understood in specific contexts. The concept of Affinity Branding is one such. The conceptual framework of this concept, as described by Peter Fisk, is shown in the diagram below (page 315). 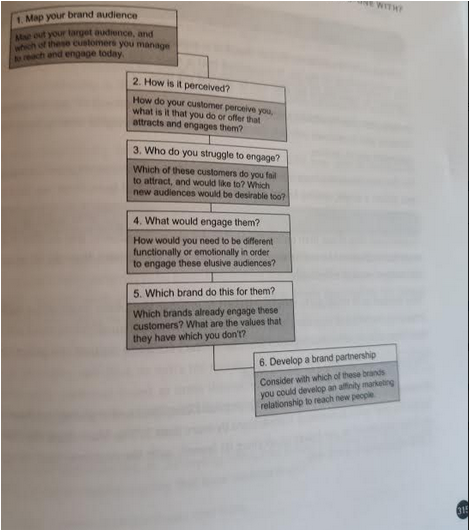 As shown in the above diagram, there are six steps in Affinity Branding and the six steps are:- a) Map your brand audience b) How is it perceived? c) Who do you struggle to engage? d) What would engage them? e) Which brand does this for them? and f) Develop a brand partnership. We will now move on to discuss each of the six steps in some detail.

The text given in the diagram reads " Map out your target audience, and which of these customers you manage to reach and engage today".

Take the example of Colgate. It has several brands in its toothpaste product mix. It has reportedly used market research to strengthen the brand positioning of its brands and it is the first to catch on to the "certified by the dentists" platform. It has a major market share in the industry, and there is tough competition. Yet, it stays where it is today. ITC is another good example. Through its e-choupal initiative, it has made millions of farmers its customers in the sense that the farmers get to buy various agricultural commodities as well. The farmers get the benefit of advanced technology and it has managed to engage with a growing number of thousands of farmers, year after year.

Hindustan Unilever has always sought to engage itself with the youth of the country and its various advertisements would reflect on the aspirations and ambitions of youth. Liril is the best of it all. Lifebuoy is sold on the health platform, but the message is clear: youth and children are its target groups, but it now aims to cover all age groups as well.

The other big players like Parachute coconut oil ( Marico Industries) and Cavinkare also aim to engage with youth in a big way. Of course, through the youth, every age group of customers is sought to be made customers. These companies have mapped their audience very well. The target customers are always wedded to the brand. The big MNCs like Domino have also attracted the youth to its numerous outlets and is now seeking to enter new markets everywhere in India.

How is it perceived?

The text says "how do your customers perceive you, what is that you do or offer that attracts and engages them?"

Rayar's Mess is a famous but small outfit in Mylapore, Chennai. It has a big local fan following and customers keep coming from distances as far as six kilometers to have the tiffin items in the morning. The owners spread the banana leaf and serve the kara chutney (made of green chilies) on it before the red hot idlis arrive. Apart from this, only one or two more items are served. The customers have always opined that the outfit is a value-for-money one that gives a healthy and rich breakfast at a reasonable cost, which is still less when compared to the so-called bigger branded vegetarian hotels. Similarly, the big retailers in textiles in the T.Nagar area of the city, like Pothy's, Jeyachandran Textiles and so on, make deliberate attempts to convey that they exist for everyone and this includes those who have limited budgets of less than one thousand rupees. The bulk discounts during the Tamil month of Aadi (mid-July to mid-August) every year, serve as a gentle reminder that the mass is the key and the customers are spread over a wide spectrum. The mass discounts attract them and engage them to a large extent.

Ditto for a pan-India brand called Havells. Within a short time, this brand has been able to really take on the big names like Philips, as this is perceived to be a desi brand, capable of taking on the might of the multinational companies. I have interacted with users of Havel's fans. They always opine that the product is the best in the market and the breeze they get (more so in summer), is really very good.

Voltas made a very successful attempt in making a middle-class looking Mr. Murthy, the brand ambassador, sort of speak on behalf of millions of customers who were attracted by the simple words spoken on the various functional aspects of the air-conditioners. The rest, as they say, is history. Every single product that is advertised with a "close to you" message has done very well. Kent RO water purifiers have the guarantee of Hemamalini, the brand ambassador, endorsing its functional excellence. Kritik Roshan, the famous film star endorses the brand called Flair pens. Today, at just Rs.10/-, the Flair gell pens are among the largest selling in the market and the product has done exceedingly well.

Who do you struggle to engage?

When Colgate realized that it had a missing link in the form of a herbal product, it quickly came out with the brand called Colgate Vedshakthi. It made an intelligent move by distributing the smallest pack of this toothpaste free with many language magazines. The television advertisements spoke of the functional effectiveness of Ayurveda and its combination with proven scientific evidence to bring to customers a product like Colgate Vedsakthi. It intelligently used housewives to endorse the product. The missing link has now been a success in the market. It is still competing with several brands from competitors like Dabur and the Vicro range of products. Yet, Colgate has come out with a product that it was a struggle to reach -- customers who preferred a herbal platform.

As explained in the diagram, new audiences would be welcome for any company. Any major player has to tick all boxes that pertain to different types of customers. This is extremely important.

What would engage them?

The text says, " how would you need to be different functionally or emotionally in order to engage these elusive audiences?". Customers have to be engaged. The existing gaps have to be closed. Intelligent marketers are continuously doing this.

Any brand should also rope in non-customers. That is the people who still do not buy a product or a service. The advertisement for the Goodnight range of mosquito repellers is a classic example. It shows a naughty young boy, mandated to take care of his infant sister. The advertisement proudly says that the boy is not alone. Goodnight is there to take care of him. His parents are shown to be engaged in a conversation on the subject. This is the best way of engaging an entire family and making them customers.

Which brand does this for them?

The aforesaid example of Colgate is a case in point. It found that Dabur and other competitors had the herbal variant. Hence, it launched the Colgate Vedhakthi. Similarly, the customers ( parents in this case) in South India, always compare the existing NEET and the IIT coaching institutes with the Chaitanya brand. This brand has been able to do a very effective job and reportedly, the others are doing the catch-up, in terms of the many kinds of skills that they need to produce the bigger number of successful students who crack the competitive exams.

There are quite a number of these collaborations. Medimix, the toilet soap, is distributed free with many a product. Sometimes, pens from Renolds or even some other brand are given free with five packs of Cinthol soap. The customer base is sought to be enlarged through such initiatives. Such efforts are continuing.

A Brief History of IIT JEE

A short article about the history of the most prestigious engineering entrance exam of our country.

Coaching after 12th: A need or a trend?

This article describes about whether coaching is required after 12th standard or is it a trend in the status.

Initial Aptitude test followed by a single round of Interview on campus.

Is IIT-JEE Coaching a must to crack the IIT entrance ?