Jaipur is one of the oldest cities in India and is popularly known as 'Pink City'. This well-planned city was built by Rajput ruler Jai Singh II and was designed by Vidyadhar Bhattacharya. This well-planned city was constructed on the basis of Vastu for the first time in India. Jaipur city falls under the West Golden Triangle tourist circuit along with Delhi and Agra. Jai Singh II gave importance to number 9 as he was knowledgeable with Astronomical Science and thus gave importance to it in the construction of Jaipur city. Jaipur city attracts a large number of foreigners as well as people of India as this city is filled with ancient beautiful forts, monumental buildings, palaces, museums, etc. So this article gives an account of all these beautiful visiting places.

It is an ancient beautiful palace located near to Zohari Bazar of Jaipur city in Rajasthan. It was built by Maharaja Sawai Pratap Singh in 1799. It is a unique five-floor palace built with red and pink colored sandstone. The palace has a total of 953 small windows projecting outwards of the palace giving a beehive honeycomb-like appearance to the total structure of the palace. This palace was built at that time for the Royal ladies to watch outside happenings through the windows. It was a favorite resort for Sawai Pratap Singh in the summer season. The windows of the palace also help to circulate the cool breeze through the windows and make the stay pleasant in this palace during the summer season. This palace is well maintained by the Archaeological Department of Government of Rajasthan. Hawa Mahal was identified as a World Heritage site by UNESCO. 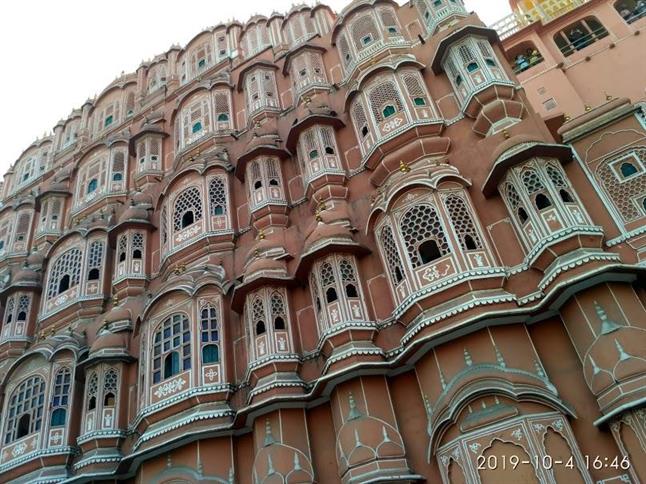 This ancient fort also known as Amber Fort, is located in Amer, which is 11km. away from Jaipur city. This fort was built by Raja Man Singh I, Mirza Raja Jai Singh, and Sawai Jaisingh and to complete it took about 200 years. The fort is located on the top of a hill and it is the main attraction for the tourists. Martha lake situated around this fort gives a beautiful look to this fort. This fort gives a splendor look with a beautiful palace with courtyards, Hall of Public Audience, Hall of Private Audience, Sukh Mahal, Sheesh Mahal, rooms for Royal families, rooms for King and Queens, many pavilions, and an escape route in case of a difficult situation. The fort was built with red sandstone. The fort includes the Shila Devi temple for the Royal families to pray. The main entrance to the fort is through Sun Gate and Ganesh Pol is the other Gate which gives entrance to the private places of the king. The fort was built in Hindu-Muslim architecture. 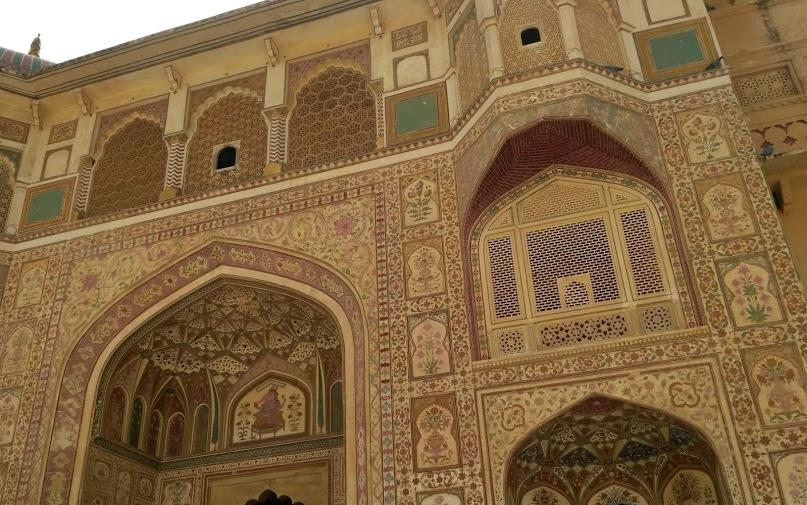 It is one of the five large Astronomical Observatories in India built by the Rajput king Sawai Jai Singh II in 1734. The World's largest stone Sundial was located in this museum. This Sundial will be useful to interpret the local time as well as the position of celestial bodies. This beautiful museum is an attractive center for historians, architects, geographers, and mathematicians. White marble stone was used to build this museum. Sawai Jai Singh II king constructed such observatories in Delhi, Mathura, Varanasi, and Ujjain also but the one that is present in Jaipur is the largest. Chakra Yantra instrument in this museum is meant for knowing the position of Sun at different times of the day, Dakshin Bhitti Yantra meant for measuring altitudes, Digamsha Yantra for forecasting Sunset and Sunrise, Jaiprakash Yantra is to observe the changes that occur in the sky, Kapil Yantra to predict the position of celestial bodies are of great interest to watch. Dhruva Darshak Pattika, Kranthi Vritta Yantra, Laghu Smart Yantra, Shastansh Yantra, Rama Yantra, Shastansh Yantra, Unnatansha Yantra are the other interesting instruments that we can found in this observatory. The timings to visit this observatory is 9 AM to 4.30 PM from Monday to Friday. 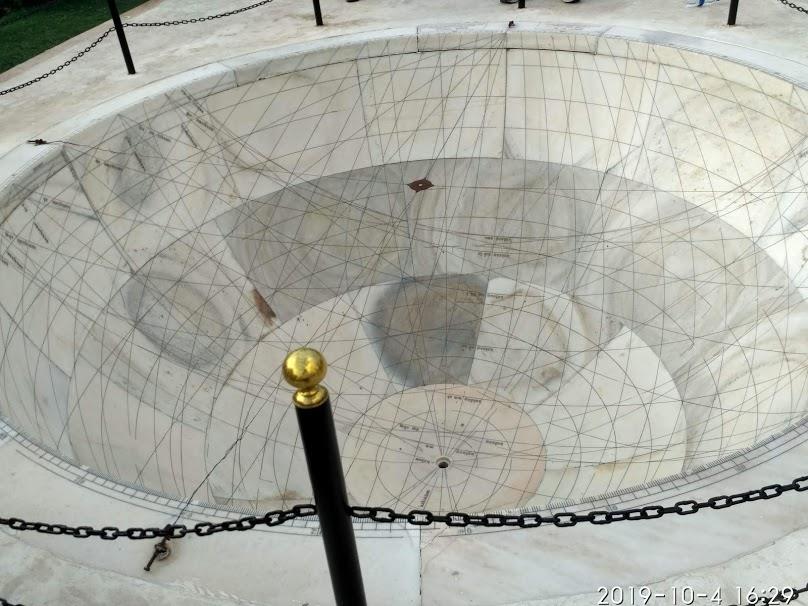 Shri Digamber Jain Atishya Kshetra Mandir is one of the oldest Jain Temple located in Sanganer, Jaipur. It is located at 16 Km. away from Jaipur city. Lord Rishabhanatha is the principal deity of this temple. The deity found in this temple is believed to be 4000 years old. This temple was built in the 10th century A.D. and resembles that of Dilwara Temple in Mount Abu. The temple has seven underground floors in it. Only ascetic Digambara saint can enter these floors and can bring the idols from the underground temple for a limited period for the devotees to watch. The temple was built with red sandstone. This temple is a storehouse for the ancient idol of Parshwanath with seven serpent hoods, beautiful carvings of different varieties of flowers and animals. This temple is provided with a Dharamshala along with a Bhojanalay with modern facilities.

It is a beautiful building located in the middle of Man Sagar Lake in the Jaipur city. Maharaja Madho Singh built this building in 1750 for the purpose to stay and relax during they go for hunting. It is a five-storied building where four floors of the buildings underwater when the lake was full. Visitors can go through a boat ride to view the Jal Mahal closely. The Jal Mahal gives an amazing look in evening times as the place is flooded with lights all over. It is a spectacular place for bird watchers to watch many-colored different birds. The architecture of the Jal Mahal reveals the Rajput-Mughal style.

This beautiful white marble temple is located at 6 Km. away from Jaipur city near Pearl hills. This temple is dedicated to Goddess Lakshmi and Lord Vishnu. The temple is also popularly known as Birla Temple as it was founded by B.M.Birla business associates. The Vishnu idol in this temple was made out of a single piece of marble. Around the temple, we can find a beautiful garden, a small gift shop, a gallery, and the Birla Museum.

It is one major tourist attraction center in Jaipur tourism. Maharaja Sawai Ram Singh built Ram Niwas Bagh in 19 the century. A sports complex, a zoo, and a Herbarium Museum can be seen here. Indo-Saracenic architecture can be found in the construction of this Ram Niwas Bagh. Albert Hall Museum built in Indo- Saracenic architectural style and is the center of attraction in this place. The museum exhibits a wide range of carpets, wood crafts, metal objects, arms, weapons, stone and metal sculptures, ivory goods, etc. Ravindra Rang Manch Theatre is another attractive center in this place where art, method acting, and plays will be exhibited for the audience. The Art Gallery located on the first floor of Ravindra Rang Manch Theater is a place for the exhibition of beautiful sculptures created by world-famous artists. The Jaipur Zoo in Ram Niwas Garden is one of the oldest zoos and it houses a large number of animals and birds. It is the fourth largest Crocodile breeding farm in India. Horse riding facility is there here for the visitors to visit this garden.

This palace is located near Jantar Mantar in Jaipur city. Maharaja Sawai Jai Singh II established this fort in 1727. The Palace Complex includes Chandra Mahal, Mubarak Mahal palaces, Court Yards, galleries, restaurants, etc. The palace is the seat of Maharaja of Jaipur in the past and is the Royal residence at that time. The Chandra Mahal at present is a part of the museum now. The Museum exhibits unique handcrafted products and the things of Royal heritage to its visitors.

This museum is located in 300 years old Nahargarh Fort in Jaipur city. It is a must visiting place in Jaipur tourism. The museum is mainly segregated into three main galleries namely Hall of Icons, Royal Darbar and Sheesh Mahal. In Hall of Icons, we can find wax and Silicon made statues. These statues include iconic personalities from varied fields like history, politics, cinema, sports, literature, art and culture. Lifelike statues of famous personalities like Amitabh Bachchan, Sachin Tendulkar, A.P.J Abdul Kalam, Mother Teresa, Dalai Lama, etc. can be seen in this museum. Beautiful paintings that depict the rich heritage of Rajasthan can be seen in the Royal Darbar gallery of this museum. Sheesh, Mahal represents the magnificent mirror work wonder where 2.5 million glass pieces used in the construction of this Mahal create an optical illusion. The visiting time for this museum is 10 AM to 6.30 PM. Entrance fee Rs.400.

Bapu Bazar-
It is the most famous market in Jaipur for buying traditional items of Rajasthan. This market is situated between Sanganer Gate to New Gate in the heart of Jaipur. Rajasthani shoes, colourful dupattas, saris, handicrafts etc. will attract you immensely.


Sisodiya Rani Bagh-
The attractive views of the garden and the excellent architecture have attracted tourists. Maharaja Sawai Jai Singh built it.

Galta Ji-
Situated in the Aravalli mountains. The unique architecture of the temple and it's special location is what attracts the travellers towards it. The natural environment and seven pools here make people fully indulge in this environment. There are statues of Lord Hanuman, Rama, Krishna, Surya and Vishnu.

Nahargarh Fort-
The famous fort of Jaipur city which is popular among people as a picnic spot. From here you will be able to get the view of Jaipur and Amer city, but its beauty is exceptional at night.

Central Park-
It is one of the largest and colourful parks of Jaipur. Located in the heart of Jaipur, this park is spread over 5 km. Here you will get an opportunity to see all the colours of nature. Another main attraction here is India's tallest Tricolour and a beautiful temple.