The CBSE Board exam was postponed due to the nationwide lockdown for the corona outbreak but the students were in the dark regarding the dates and timings for 2020 CBSE pending examination. Finally, Mr. Anurag Tripathi, the Secretary of the Board and the Union Minister of Human Resource Development has announced the new time frame of the remaining CBSE Board examinations. All students are suggested to make proper preparation accordingly.

Quickly check out the new dates: CBSE revised time table 2020 for remaining Board exams for class 10 & 12.

Many people suggested earlier to cancel the rest of the exams and conclude it based on the marks obtained in previous exams, but the Human Resource Development, and the Board both rejected that proposal. 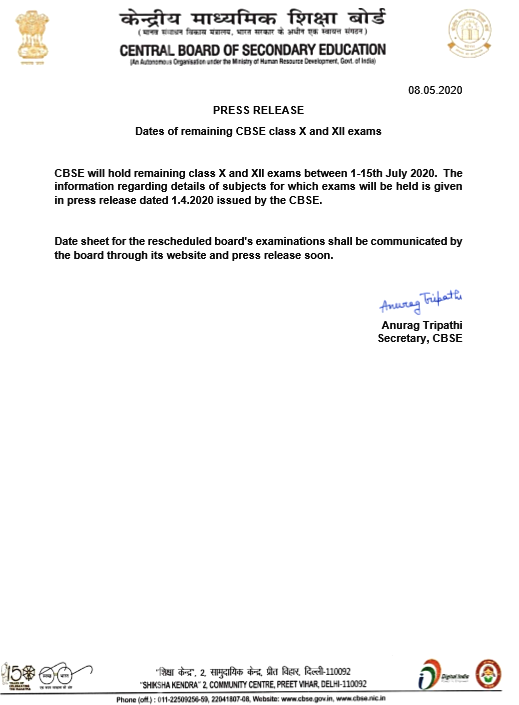 A few days ago, the Union Minister of Human Resource Development announced that the JEE Main 2020 will be started on 18th July so it is interesting to keep a watch on the dates of the pending science papers that are being fixed by CBSE.

Article by Chaitali Ray Chaudhuri (Datta)
Chaitali is a freelance writer from India, likes to share knowledge/information through her various articles to continue her writing passion and an editor of the most successful educational portal IndiaStudyChannel.com, shortly ISC.

Eager to know when JEE Main, Advanced, and Joint Entrance Exam for medical and dental courses will be held? The updated schedules of the examinations have been announced by the Union Minister of Human Resource Development, Mr. Ramesh Pokhriyal Nishank on the live webinar on 5th May 2020. Read this article to get the new exam dates.

The Central Board of Secondary Education has published a re-scheduled date sheet for 10th and 12th standard pending exam today. Candidates want to find out the updated time table as released, read this article thoroughly. Complete updates on the schedule of remaining exams are available hereunder.

Are you searching for the notification of the dates of the final exam for UG and PG students of CU to be held on in 2020? Then you are on the right page. The University of Calcutta has announced the exam timing for undergraduate and postgraduate students.

Looking for West Bengal Board class 12th exam dates 2020? The West Bengal Council of Higher Secondary Education has announced re-scheduled programs of all rest examinations for class XII. If you want to check the newly released time table, you are on the right page. This article provides an updated schedule of WB Board Higher Secondary exams.