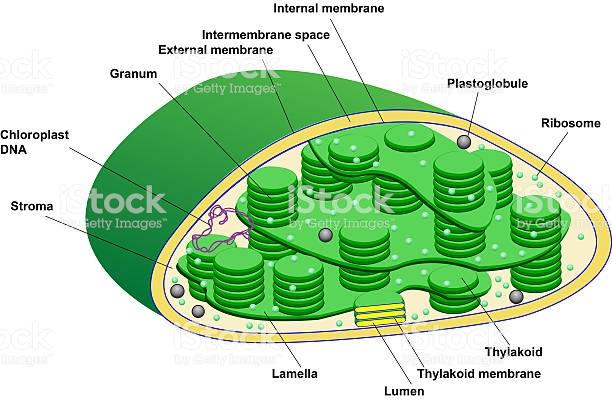 In higher plants, chloroplasts are biconvex or plano-convex in shape. However, different plants cells may have filamentous, spheroid, ovoid or club-shape. The size of chloroplast varies from species to species. Electron microscopic studies have shown that chloroplasts are bounded by two unit membranes like mitochondria. Between two membranes, there is a fluid-filled intermembranous peri-plastidial space. The stroma is the inner matrix of the chloroplast, which fills in the hollow space. The chloroplasts consist of many granular chlorophyll bearing bodies known as grana. Each granum is composed of 10-100 disc like superimposed, membranous components known as thylakoids.

Chloroplast or chromatophores contain pigments which convert light energy into chemical energy during photosynthesis. There are three types of pigments in photosynthetic cells:

Chlorophyll is a green pigment, found within chloroplast of all green plants and is involved in photosynthesis. It is made up of five types of elements C, H, O, No and Mg. Chlorophylls are of ten types:

Chlorophyll-a: Chlorophyll-a is a blue green coloured pigment which is soluble in petroleum ether. It absorbs red and violet colored light during photosynthesis. The empirical formula of chlorophyll-a is C55H72O5N4Mg. It is found in almost all green plants.

Chlorophyll-b: Chlorophyll-b is a pale green coloured pigment which is soluble in methyl alcohol. During photosynthesis, this pigment also absorbs light of red and violet colour just like chlorophyll-a. It is found in two forms: chlorophyll 640 and chlorophyll-b 650. Its empirical formula is C55H70O6N4Mg.

Chlorophyll-d: Chlorophyll-d is found in the algae belonging to calss rhodophyceae. Its empirical formula is C54H70O6N4Mg. 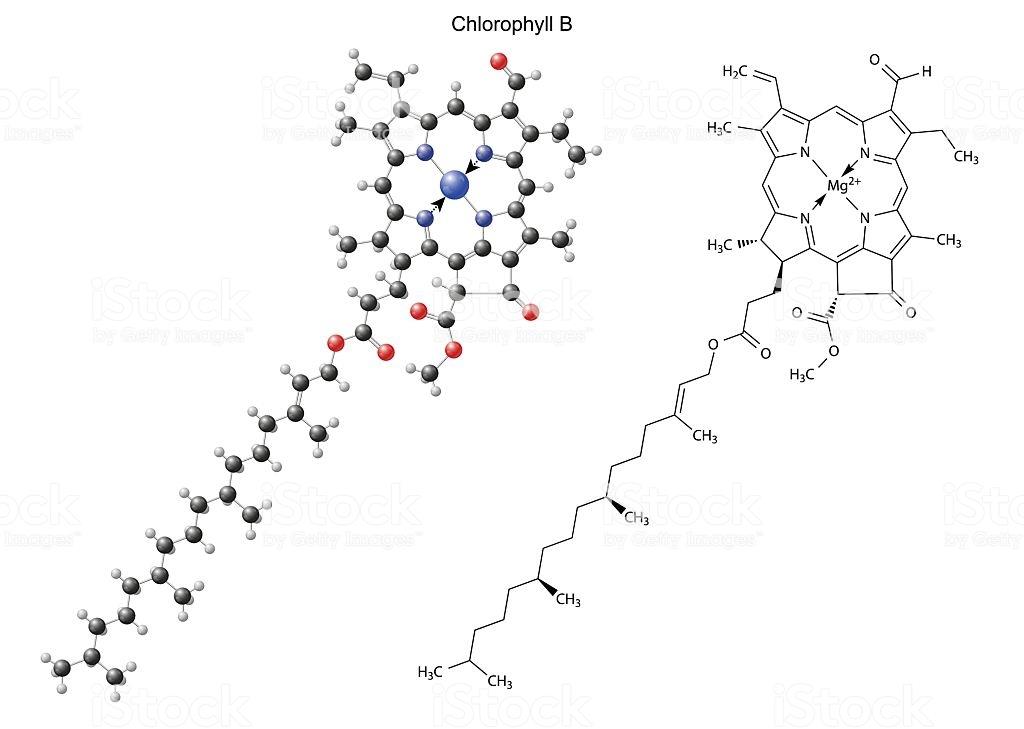 Phytol: Phytol is hydrophilic in nature and is made up of alcohol phytol (C28H39OH). Chl-a and b differ in because in Chl-b there is a -CHO group instead of a -CH3 group at the third carbon atom in II pyrrole ring. The phytol chain is responsible for lipoidal solubility of the chlorophylls.

Carotenoids are yellow or orange coloured pigments, usually found in close association with chlorophylls. They occur in thylakoids and act as an accessory pigment of photosynthesis. Carotenoids absorb light energy in the mid-region of the visible spectrum and transfer their absorbed energy to chlorophyll molecules. They pick up nascent O2 released during photo-oxidation of water and change them into the molecular state. Thus, carotenoids protect the chlorophyll molecules from photo-oxidation. Carotenoids are also found in the chromoplasts in flower and fruits and make them attractive for cross pollination and dispersal. There are two major groups of carotenoids the carotenes and xanthophylls:

Carotenes: Carotenes are hydrocarbons with a general molecular formula C40H56 and are orange-red in colour. Carotenes absorb blue and green light. The most common carotene is b-carotene which is converted into vitamin-A by animals and human beings.

Xanthophylls: Xanthophylls are yellow coloured carotenoids with a general formula C40H56O2. E.g., Zeaxanthin and Lutein. These are mainly found in photosystem II (PS-II). Fucoxanthin is also a type of xanthophyll which is found in many algae.

Since they are using an illustration (Structure of Chloroplast), my own watermark on the site, they could at least give the correct credit, which is not (Image courtesy: www.freeimages.com), but the credit that follows:
Credit: Luiz Fernando Botter
https://www.indiastudychannel.com/attachments/resources/178940-1-chloroplast.jpg
https://www.istockphoto.com/br/foto/ilustra%C3%A7%C3%A3o-de-um-regime-cloroplasto-gm538967637-57473140