A seed is a fertilized and fully ripened ovule meant usually for the reproduction of a plant. Seeds are usually enclosed inside a fruit in Angiosperm plants and are directly born on the plant itself without fruit in Gymnosperm plants. Any seed encloses a future miniature plant in the form of an embryo which is in an inactive (dormant) state. Such a dormant seed germinates when exposed to favorable conditions. The seed also stores food material to nourish the growing embryo while the seed germinates under favorable conditions. Interestingly, the embryo of certain seeds of plants remains alive even after 100 years or more. The embryo of seeds has the capability to withstand unfavorable conditions of climate, temperature, drought, etc. Another interesting thing about seeds is when the seeds are in a dormant or stored condition also inhale oxygen to respire at a minimum pace to remain alive. Seeds vary in size and also in their number in various fruits. Poppy and Orchid plant seeds are very small in size while Coconut and Double coconut seeds are largest. Mango fruit has a single large seed while Watermelon has many seeds in a single fruit.

Seeds can be classified based on the number of cotyledons present in the seed or the presence/absence of endosperm in the seeds.

Structure of a Dicot seed 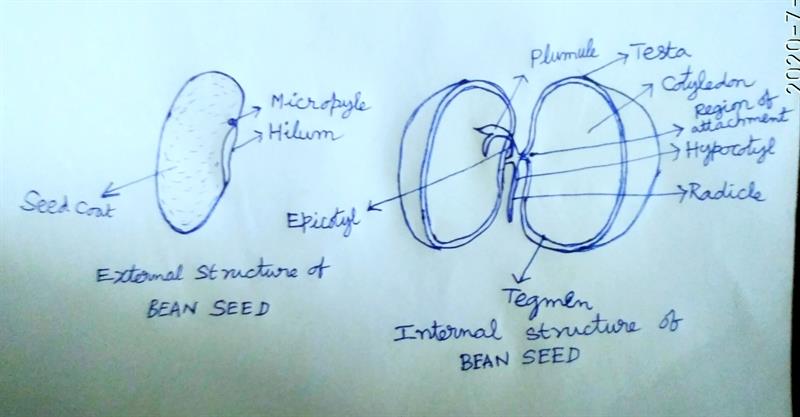 External and Internal structure of Bean Seed (Diagram by Author)

Externally a bean seed is kidney-shaped and deep brown or black or white in color. The outer surface of the bean seed is convex and the inner surface is concave. Externally when we observe the seed, it has a thick leathery seed coat, a distinct whitish oval scar on the concave side of the seed, and a tiny micropyle close to the hilum. We can observe the internal structure of a bean seed very clearly by soaking the bean seeds with water overnight.

A whitish scar present on the inner concave surface of the seed. It represents the point where the seed is attached to the fruit wall.

A minute pore present to one side of the hilum through which water absorbed by the seed for its germination. It makes the water available for the embryo to become active and germinate. The micropyle also will be helpful for the exchange of respiratory gases and that is so vital for the seed to be alive.

After removing the seed coat, we find two fleshy white kidney-shaped cotyledons in between which the embryo gets located. The cotyledons in the seed are provided with rich nutrients for nourishing the embryo while it is germinating into a tiny plant.

It is a whitish fleshy part of the seed located in between the cotyledons as well as attached to them for getting nourishment. The embryo is provided with an axis called tigellum. The lower part of the axis is called radicle and the upper part of the axis called plumule. During germination of the seed, the radicle transforms into the root and the plumule transforms into the shoot. The shoot appears only when the cotyledons get unfolded during germination. The region of the embryonal axis above the region of attachment to the cotyledons is known as epicotyl and the below region of attachment is known as hypocotyl. 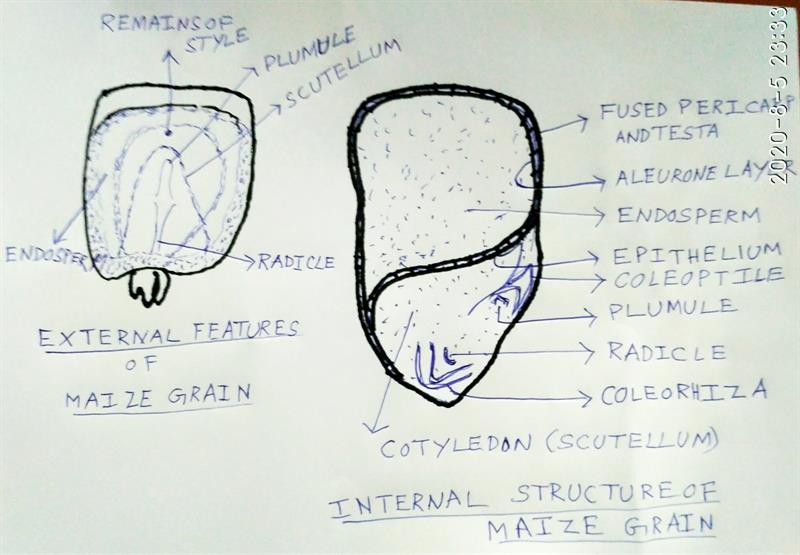 Structure of Monocot Maize Seed (Diagram by the Author)

The Maize seed that we obtain from maize cob is a one-seeded fruit formed from a small flower of an inflorescence. The maize grain is a one seeded fruit where the fruit wall and seed coat are completely fused with each other to form a protective covering. The maize grain is a small triangular grain and one side of it has a whitish oval patch. Below this patch, a ridge-like structure can be seen in which the embryo of the seed embedded.

If we cut a soaked maize grain in a longitudinal way with a sharp blade and if we observe it with a hand lens, we can visualize the following internal structure of maize seed.

The maize seed has a brownish membranous covering formed of seed coat fused with the fruit wall (Pericarp). It is the protective layer of the seed.

The grain is divided into two distinct unequal regions separated by a distinct epithelial layer in the longitudinal section. The upper bigger portion of the grain is the endosperm and the lower smaller region is the embryo. Endosperm stores plenty of proteins and starch to supply the nutrients initially while the embryo develops into a baby plant as the seed is germinates. The endosperm is covered by a protein layer called aleurone layer

In Maize seed, the cotyledon is a triangular-shaped hard shield-like structure called Scutellum. The scutellum is attached to endosperm by epithelial layer. Its function is to digest and absorb nutrients from the endosperm and supply it to the growing embryo.

Comparision between the structure of Bean seed with Maize seed