The human ear is the most specialized organ meant for the perception of sound and for the maintenance of body balance. Hence they are known as stat-acoustic organs. The ear has parts like the external ear, middle ear, and inner ear. Each of these parts will do some specific functions like receiving sound waves, amplifying, and converting sound energy into a nerve impulse.

Human ear can be divisible into three distinct regions-the the outer external ears, the middle ear, and the inner ear. 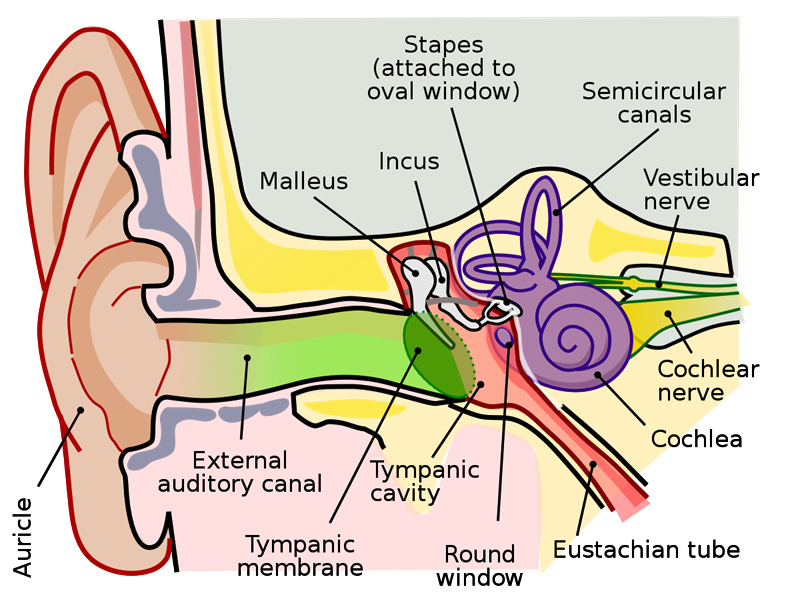 It consists of the outer projecting part ear pinna (auricle), auditory canal (auditory meatus) and the tympanum (eardrum). The ear pinnae are made up of skin and cartilage and are arranged in an oblique fashion on the lateral surface of the head. The function of ear pinna is to collect and direct sound waves to the middle ear through the auditory canal. The pinna and auditory canal help us to locate the source of the sound.

The auditory canal is a one-inch tube that connects external ear pinna with the eardrum. On the inner surface of the auditory canal, few hairs and numerous ceruminous glands are present. These glands are formed from sebaceous glands that got modified and specialized into ceruminous glands. These specialized glands secrete cerumen (ear wax or glue) and that helps to prevent any foreign particles to move into the ear.

Towards the end of the auditory canal, there presents a thin membranous tympanum or eardrum. The tympanum separates the middle ear from the external ear. When sound waves strike the tympanum, it vibrates and changes sound waves into mechanical vibrations. These sound vibrations move into the middle ear. In order to hear the sound, the eardrum has to move only by 0.00000001 mm. when the sound waves strike the tympanic membrane.

It is an air-filled cavity and is embedded in the cranial bone. It is also known as the tympanic cavity. The tympanic cavity includes three tiny small bones called ear ossicles arranged in a lever like fashion. The three ear ossicles are Malleus (hammer), Incus (anvil), and Stapes (stirrup) and are arranged in the same order articulating with each other. The beginning part of the hammer bone is placed over the eardrum and the end part of the stapes is placed over the oval window of the inner ear. The ear ossicles are the smallest bones present in the human body. The function of ear ossicles is to amplify the sound vibration and transmit them into the inner ear through an oval window. The sound vibrations received from the eardrum are magnified by 20-25 times by the lever like the action of the ear ossicles 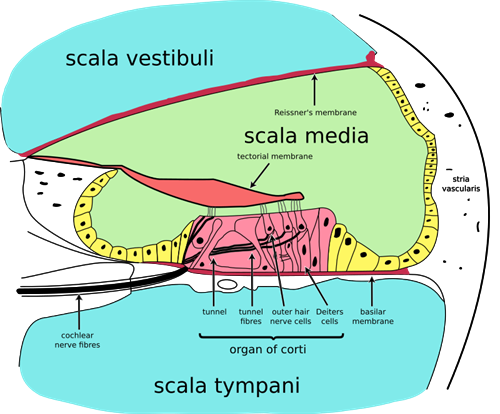 The internal structure of Cochlea (Courtesy:-Wikipedia.org)

The inner ear has two main parts-the hearing machine cochlea and the body balancing organ semi-circular canals. The cochlea is a two and a half turns coiled snail shell-like structure. The inner winding cavity of the cochlear canal is divided into three cavities by Reissner's membrane and basilar membrane. The three cavities of the cochlea are scala vestibuli, scala media, and scala tympani. The vestibular and tympanic canals are filled with liquid perilymph while the scala media canal is filled with liquid endolymph. On the basilar membrane of the scala media cavity, sensory hair cells are present and that are in contact with the tectorial membrane present on the other side of this cavity. The sensory cells, the basilar membrane, and the tectorial membrane together form the hearing organ called organ of corti. The nerve fibers from sensory hair cells together form a branch of the cochlear nerve that joins the main auditory nerve. Thus the sensory cells of the organ of Corti transmit the sound impulses from the ear to the brain through the auditory nerve.

Attached to cochlea is a vestibular apparatus consisting of three semi-circular canals. These three semi-circular canals are arranged in three different planes and are arranged at right angles to each other. Of these three canals one is arranged in a horizontal plane and the other two are arranged in a vertical plane. One end of these canals becomes swollen to form an ampulla which contains sensory cells for dynamic balance of the body while the body is in motion. The semi-circular canals are filled with liquid endolymph. Sensory hair cells present in ampullae of Semi-circular canals send the impulses of body motion through the auditory nerve. The balance brought about while the body is in motion by ampullae of semi-circular canals is known as dynamic balance. For example, if you are rotating around yourself continuously, the endolymph present in the three canals rotates around the tubes and press against the sensory hair cells present in ampullae. This information about your body's rotation is sent through the impulses passed from sensory cells of ampullae through the auditory nerve to the brain. Now the brain sends an order to bring your body to normal condition and thus dynamic equilibrium is brought out. The dizziness caused immediately after stopping your rotation is due to the endolymph liquid still continues to rotate even after you are in still condition and false information sent to the brain is the cause of this situation. 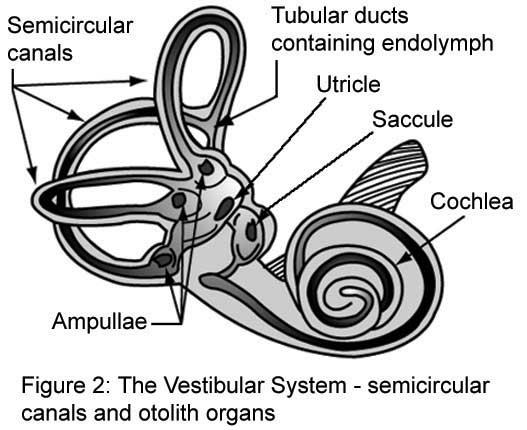 A stem-like structure formed by the union of ampullae of semi-circular canals contains two parts-a utriculi and a sacculus. These parts also contain sensory hair cells in them in patches. Chalky granules called otoliths present in the fluid of endolymph in this stem press on hair cells which send messages about the position of the body to the brain through the auditory nerve. Suppose if you keep your head facing sky without any movement for a long time, the otoliths present in endolymph press the sensory cells and which in turn send messages about the static position of your head to the brain. Then the brain sends an order to bring back your head to normal position. Such an equilibrium brought about by utriculus and sacculus of semi-circular canals with respect to the position of the body or gravity is known as Static balance.

The following events occur in the process of hearing.


The human ear can perceive sound vibrations between 20 to 20,000-hertz frequencies. The most clearly heard sounds fall in frequencies between 100 to 4000 hertz. But the dogs have the ability to hear 40 hertz to 60,000 hertz.

Are you wondering about what kind of activities to plan for kids? Looking for helping children to build on hobby activities? Check this article to get a few ideas.

Importance of office and its activities

Do you want to know the importance of working in and office and the activities carried at the office? Check this article to know about such details.

A unique reality show based on the developmental activities

Reality shows are there in all channels. But a unique one was broadcast by Door-darsan Thiruvananthapuram Kendra. It was a contest about the developmental activities carried out in various Panchayaths in Kerala.

This resource contains details on summer camp in Ooty, near Bangalore. Here in this resource you will find the type of activities carried out at the camp and the timings of the camp.