The heart in the human body is considered to be a pumping machine as it pumps the blood to various parts of the body ranging from the tip of the head to the tip of the toe.

The human heart is roughly triangular in shape and it is broad at its upper end and cone-shaped at its lower end. An adult human heart weighs about 250-350 gms. The heart is located on the median position of the chest region and its base is situated on the diaphragm. The popular belief is that the heart is towards the left side of the chest is due to the fact that while the heart contracts, the lower cone end of the heart gets projected towards the left side. The delicate heart is protected by the bony rib cage and two spongy lungs covered on either side of the heart. The heart is covered and protected by a double membranous sac called Pericardium. A fluid called pericardial fluid fills between the gap of the two membranes of the sac and that acts as a lubricating agent to reduce the friction and mechanical damage to the heart as it contracts and expands during the heartbeat. 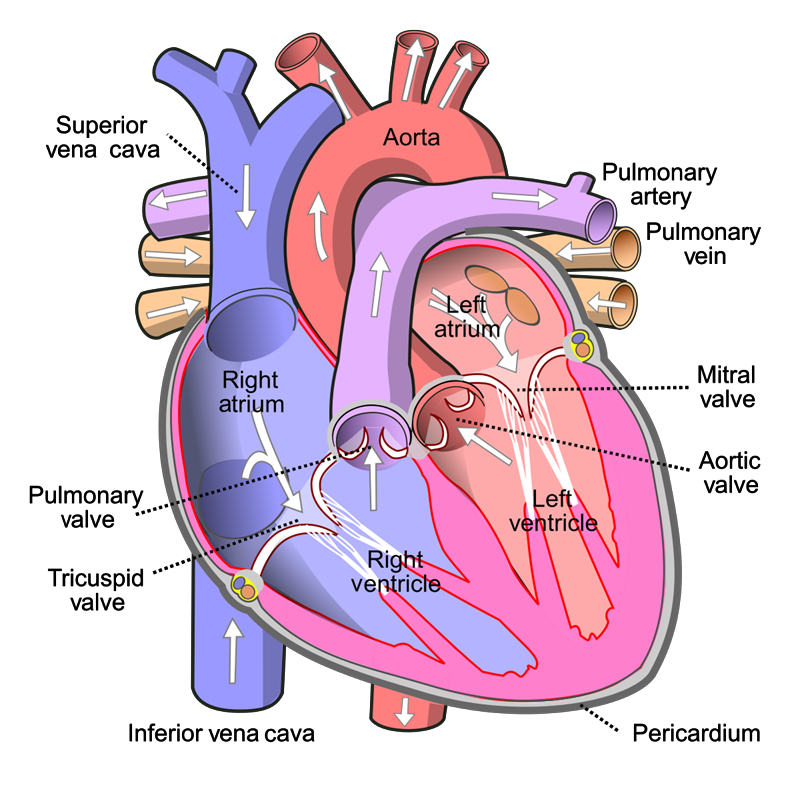 The internal structure of the human heart (Courtesy:-wikipedia.org)

In a vertical section view (V.S) of heart, we can find four distinct chambers in it. The upper two chambers of the heart are known as auricles or atria and the lower two chambers are known as ventricles. The right side chambers of the heart are separated from the left side chambers by Inter auricula ventricular septum. This septum helps to separate the deoxygenated blood in the right side of the heart with the oxygenated blood present on the left side of the heart. This feature helps to increase the efficiency of oxygen supply to the entire body as the blood is not mixed like in some other organisms.

Valves of the heart

Tricuspid and tricuspid valves are held in position by special structures called Chordae tendinae that connect valves with the walls of the ventricles. These structures hold the valves in position and prevent overturning into atria.

Pocket shaped pulmonary semilunar valves are present at the base of the pulmonary artery in the heart that prevents the backflow of blood and allows the deoxygenated blood to move into the lungs for purification.

Three pocket shaped aortic semilunar valves are present at the base of the aorta prevents the backflow of blood and help to push oxygenated blood to move out of the heart to get distributed to all parts of the body.

It is a patch of muscle tissue present at the base of the right atrium near a tricuspid valve on the inter auricular septum. It is the structure that initiates a heartbeat. It generates a wave of cardiac impulse that spreads from auricles to ventricles. This impulse is conducted to ventricles with the help of special conducting fibers called Purkinje fibers. These cardiac impulses can be recorded by an instrument called Electrocardiograph. The graphical record of these changes in the heart is called Electrocardiogram (ECG). Sometimes the Pacemaker of the heart may become defective or damaged and in such cases, an artificial Pacemaker is implanted in such persons to regulate the functioning of the heart.

The heart alternatively contracts and relaxes in a systematic way. The contraction phase of the heart is known as systole and the relaxing phase of the heart is known as diastole. One systole and one diastole together constitute a cardiac cycle or heartbeat. Each heartbeat or cardiac cycle lasts for about 0.85 seconds. Systole of atria takes around 0.15 seconds, systole of ventricles takes around 0.30 seconds, and all the chambers in diastole condition for about 0.40 seconds that altogether constitute 0.85 seconds.

When we place a Stethoscope on the chest of a person and if we hear the sound of the heartbeat, we can here LUB and DUB sounds. The LUB sound produced in a heartbeat due to the closer of tricuspid and bicuspid valves closed sharply at the start of ventricular systole. Similarly, the LUB sound can be heard due to the closer of the semilunar valves at the base of the pulmonary artery and aorta at the beginning ventricular diastole.

Double circulation of blood in humans


Functions of the heart