Bacteria are the most primitive simple single-celled prokaryotic organisms present in nature. They are present everywhere in nature and are cosmopolitan in their distribution. These organisms are so small in their structure and that can't be observed with our naked eye but can be observed only under a microscope. The singular form of bacteria is a bacterium.

Bacteria were first discovered by a Dutch physician Antony Von Leeuwenhoek in 1675 when he observed the scrapings of teeth under the microscope constructed by himself. He named these tiny organisms as little 'animalcules'. These organisms were later coined as bacteria by Ehrenberg in 1838. Cohn classified bacteria as plants in 1856 and scientist Robert Koch proved bacteria cause diseases in 1876. Koch discovered Anthrax bacteria in 1876 and paved the way for the establishment of the Bacteriology branch in Science.

A France scientist Louis Pasteur established the branch of Science dealing with microscopic organisms like bacteria as Microbiology. He did exhaustive work on the fermentation and decay process connected with bacteria. He developed the first vaccine that cures hydrophobia disease caused by the bite of a rabid dog.

At present, we have the knowledge of several thousand known species of bacteria that are there everywhere in nature. They are present in the air, water, soil, hot springs, glaciers, inside and outside the human body or animal body, the food we eat, as parasites in plants and animals, as saprophytes on dead and decaying matter, etc.

Bacteria are the smallest living unicellular Prokaryotic organisms present in nature and their size usually ranges from 0.1-10 microns (1 micron=1/1000 m.m.) in their length. The size of spherical bacteria may range from 0.5-2 microns and rod-shaped bacteria may range from 2 to 10 microns. The smallest known bacteria is Mycoplasma. The largest known bacteria is Bacillus butschlii and that measures 80 microns in length.

Bacteria can be of four basic types basing on their shape. Under the high power of the microscope only we can observe the following different shapes. 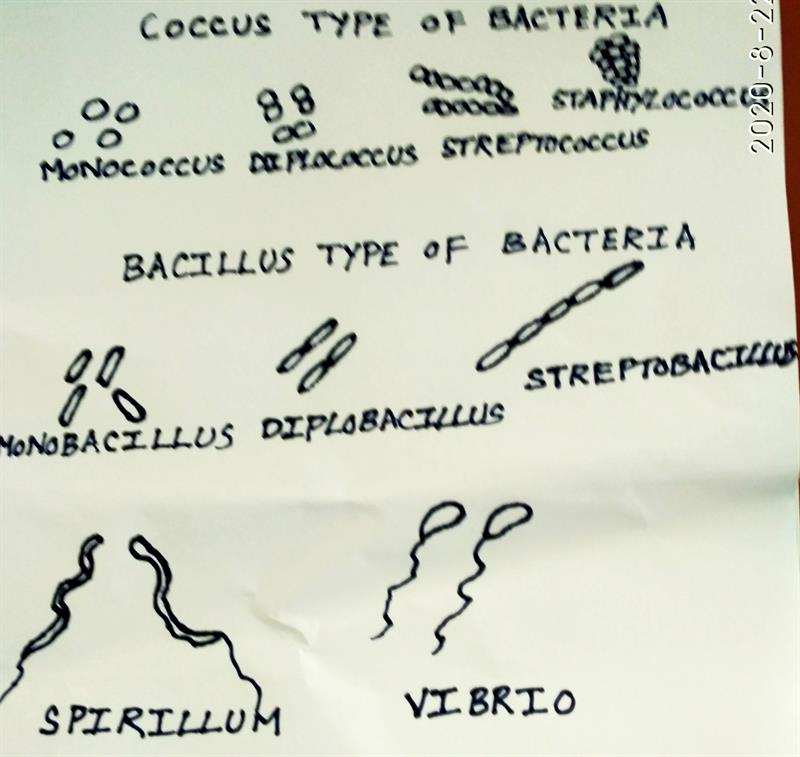 Shapes of Bacteria (By the Author)

These bacteria are usually spirally twisted or cork-screw shaped mostly with flagella. Spirillum bacteria is this type of bacteria.

These are small comma-shaped bacteria with a flagellum. Vibrio cholera, a bacterium that causes Cholera disease is this type of bacterium.

Classification of bacteria basing on affinity towards a stain

The following is the generalized structure of a bacterial cell under an electron microscope. 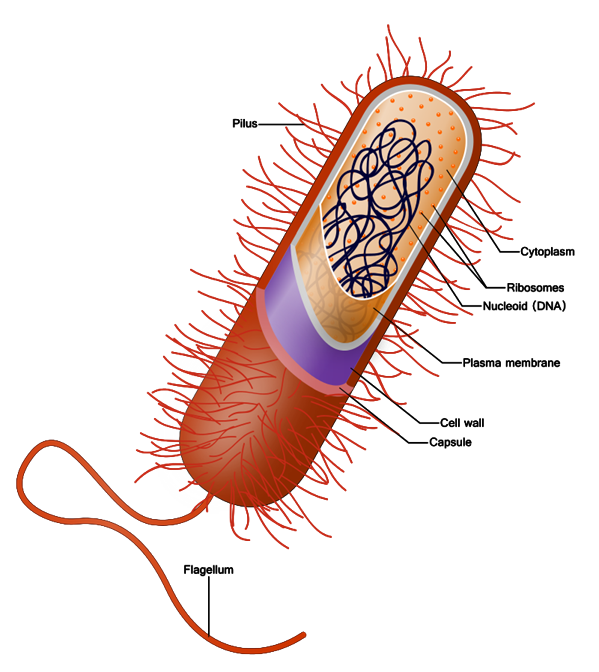 Ultrastructure of a Bacterial Cell (Courtesy:-wikipedia.org)

A bacterial cell is a typical prokaryotic cell lacking nucleus with the nuclear membrane and membrane-bound cell organelles. A bacterial cell will have a rigid cell wall like a plant cell but it is not made with cellulose and it is composed of a material called peptidoglycan (murein). The cell wall is non-living in nature. Some species of bacteria that are surrounded by a slimy mucilaginous sheath around their cell wall and that is considered to be secreted by the protoplasm of the bacterial cell. Bacterial species possessing such capsules on their outer surface are considered to be resistant varieties.

In certain species of bacteria, fine threads of a protein called sex pili or pili or fimbriae cover on their outer surface. These pili in these bacteria are useful in attaching the partner bacteria in the sexual conjugation process and also attaching themselves to some support.

Bacteria can be divisible into two groups basing on the mode of nutrition-Autotrophic and heterotrophic.

Photosynthetic bacteria like Chlorobium and Rhodospirillum possess bacteriochlorophyll pigment by which they can carry photosynthesis. In this type of photosynthesis, food is prepared with the help of sunlight but no oxygen is released as in plants.

Chemosynthetic bacteria are a type of bacteria that oxidize inorganic compounds like nitrogen, sulfur, and iron to get chemical energy. By using this chemical energy, they reduce CO2 to make food. Thus these bacteria are also autotrophic in nature. Ex:-Nitrosomonas and Nitrobacter.

They can be divisible again into three groups-Saprophytic, Parasitic, and Symbiotic.

Saprophytic bacteria live on dead and decaying matter. They secrete enzymes on dead material and digest them. The digested material will be absorbed as their food by these organisms. Ex:-Clostridium spp.

Parasitic bacteria bacteria draw nourishment directly from the host body. Parasites that cause diseases to host are known as pathogens. Ex:- Vibrio cholerae.

Symbiotic bacteria are those bacteria that live in close association with other organisms by which both the organisms get benefited. Ex:-Rhizobium bacteria live in the root nodules of leguminous plants and they both mutually help each other in their existence.

Bacteria respire through their general body surface by simple diffusion method. Bacteria that need oxygen for their respiration are said to be aerobes and those bacteria that don't need oxygen are said to be anaerobes. Mycobacterium tuberculosis and Corynebacterium diphtheria are obligate aerobes and thus they can't live without oxygen. Similarly, Clostridium tetani and Clostridium septicum are obligate anaerobes and thus they cannot live in the presence of oxygen.

Bacteria reproduce most commonly by the Asexual method of reproduction called Binary fission under favorable conditions. Some species of bacteria rarely undergo sexual reproduction by the Conjugation method.

The most common method of asexual reproduction in Bacteria is binary fission. Binary fission occurs under favorable conditions like the availability of food, air, water, and optimum temperature. The following are the steps in binary fission of bacteria:-

Under favorable conditions, a single bacterium can divide into two bacterial cells within 20 minutes. If this rate continues for about 24 hours, 280 billion bacteria can be produced from one bacterium. But this rate never continues like this because as the number of bacteria increases enormously, there occurs a situation where food availability decreases, poisonous metabolic wastes accumulate and that will kill the bacterial population.

A highly primitive type of sexual reproduction occurs in certain limited species of bacteria. Sexual reproduction occurs through a method called conjugation. In this method, bacteria of two different strains of the same species come close to each other and attached to each other by sex pili. Through the sex pili, DNA from donor bacterium passes into the recipient and changes the genetic nature of the recipient. Here in this sexual process, there is no increase in individuals but only a genetic transformation occurs. 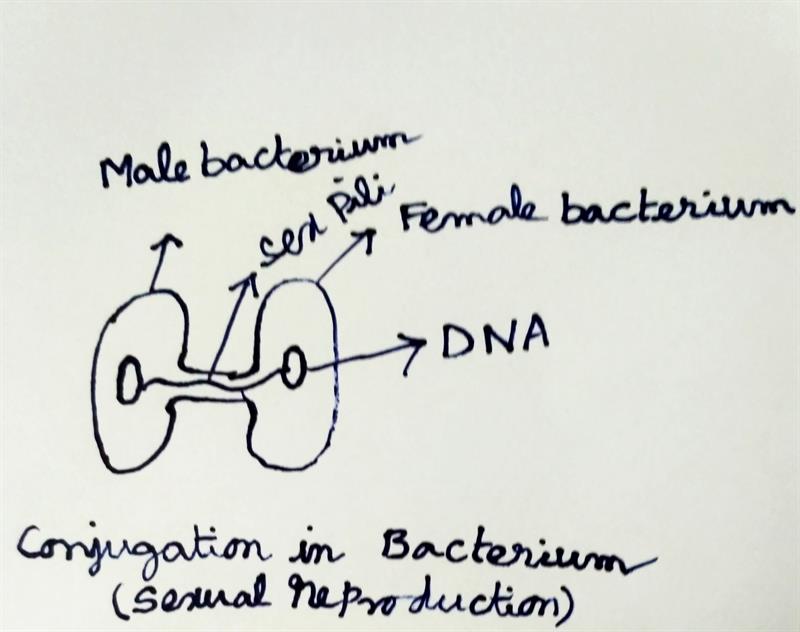 Sexual reproduction by Conjugation method in Bacteria (By the Author)

Under severe conditions of climate like unavailability of water, high temperature, lack of food will make bacteria to undergo spore formation to overcome the conditions. The cell content of bacterium transforms into a spherical mass and develops a thick resistant wall around it during spore formation. This hard spherical body is contained inside the original bacterial cell wall and become dormant until favorable condition return. Once the favorable conditions return, the cell wall of bacterium ruptures, and the spore inside transform into a bacterium. This method is not considered to be a method of reproduction as it doesn't allow an increase in the number of individuals. This method is only helpful for the bacteria to overcome unfavorable conditions. 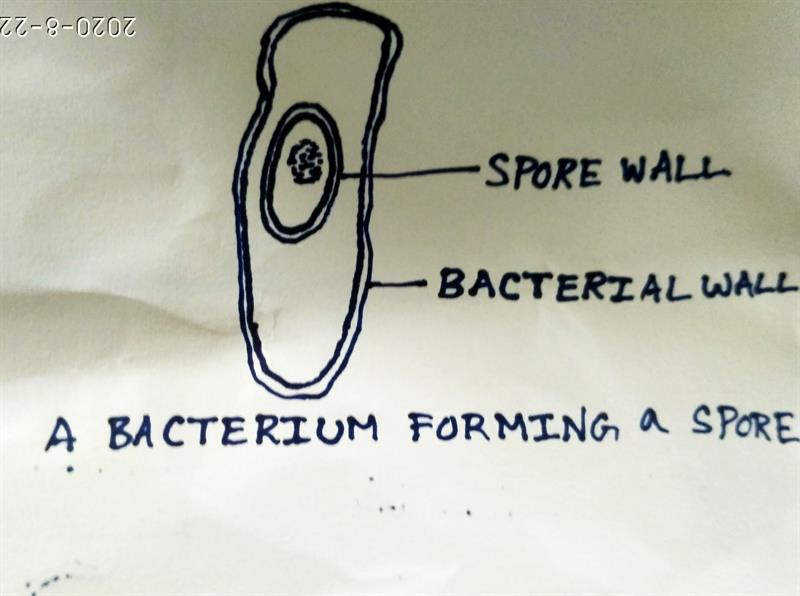 Spore formation in Bacteria (By the Author)

According to the Five Kingdom system of classification, bacteria were included under Monera kingdom for the following reasons:-