Skin is the largest organ that covers the entire external surface of the body. In an adult individual, the skin covers a surface area of roughly 22 square feet (2 sq. m.) and it weighs around 4.5-5 Kg. Skin accounts to be 16% of the total body weight. The thickness of the skin varies from one part of the body to the other part of the body. The thickness of the skin on eyelids is 0.5 mm. , on the heels, 4 mm. and in most other parts of the body is 1-2 mm. Roughly one square inch of skin contains millions of cells, 1000 free nerve endings, 100 oil or sebaceous glands, 150 sensors for pressure, 75 for heat, and 10 for cold.

The skin is a sheet-like organ composed of two distinct layers under the microscope. The two layers of the skin are the epidermis and dermis. 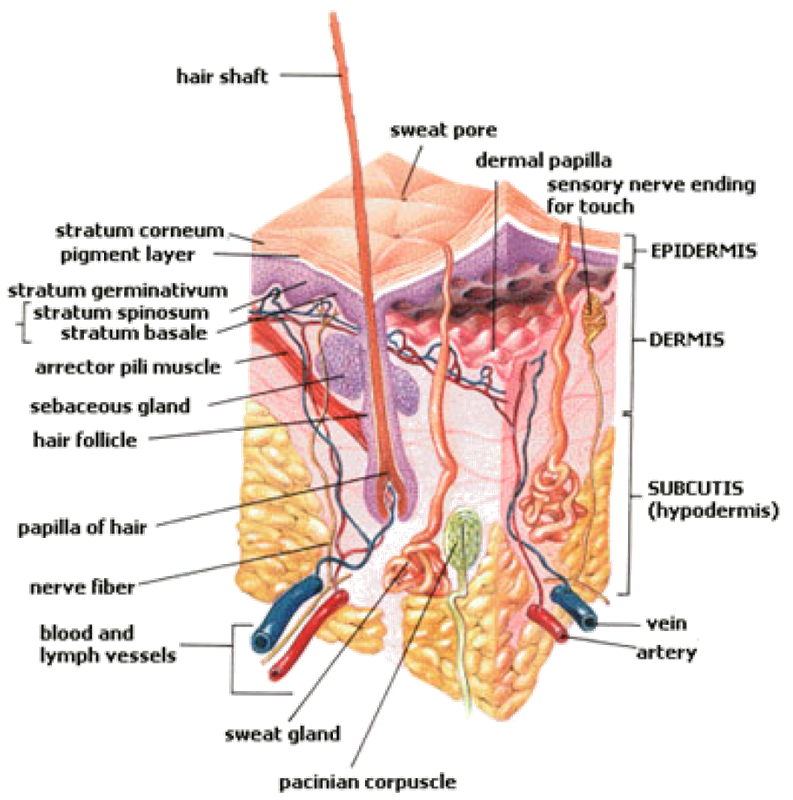 Structure of human skin under a microscope (Magnified) (Courtesy:-Wikipedia.org)

It is the outermost layer of epidermis composing 25-30 rows of flat dead cells. These cells are filled with a waterproof protein called keratin. So this outermost layer of the epidermis is commonly known as the cornified layer. This hard protein in these cells gives abrasion resistance and protective qualities to the skin. New cells of the epidermis are continuously produced from the basal layer of the epidermis and as they are pushed upwards, the cytoplasm of the cells will be replaced with keratin making them dead. Nearly it takes two weeks for these cells to rise to the top from the basal layer. These dry dead cells that continuously reach to the surface of our skin will fall off without our notice while rubbing, bathing, handling things, rubbing with clothes, etc.

Protecting the deeper layers of skin from injury and microbial invasion, making the skin waterproof, and preventing loss of water from inside the body are the main functions of the Stratum corneum.

It is a very thin middle layer next to Stratum corneum consisting of 3-5 sub-layers of flattened cells. These cells are at various stages of development in which the cytoplasm is replaced by keratin and the nucleus gets disintegrated.

This layer is also known as malpighian layer. It is the innermost or deepest layer of the epidermis. It is composed of a single layer of columnar and actively dividing cells. New cells formed from this layer are pushed towards the surface to form part of the granular and cornified top layer. This layer also includes specialized melanocyte cells that produce melanin pigment and that is responsible for skin color. The different quantities of this pigment in an individual will give different coloration to the skin of an individual.

This layer is mainly responsible for the repair of skin if it gets injured.

It is the deeper thick second layer of skin. It is a much thicker layer than the epidermis. It is a tough and flexible layer. The toughness and flexibility of this layer are mainly due to collagen and elastic fibers present in its composition. The cells of the dermis are highly scattered with many fibers interspersed between them. In the dermis layer many blood vessels, nerve fibers, sensory organs, hair follicles, sweat glands, etc. are embedded in it. The leather of animals is the dermis part of the animal's skin.

The dermis can be divisible into two main regions-Papillary regions and the Reticular layer.

A subcutaneous layer is present below the skin but it is not a part of the skin. It includes a large amount of fat tissue (adipose tissue) and nerve endings called Pacinian corpuscles that are sensitive to pressure.

The fat tissue stored in this layer act as an insulating layer preventing the loss of heat from inside the body acts as a cushion to protect the body against mechanical injuries and helps to provide energy in needy times.

Skin is the largest organ that covers our entire body and serves many vital functions.