Flower is the sexual reproductive organ of a plant. Flowers bear the stamens, the male reproductive organs, and ovaries, the female reproductive organs in the same flower, or separately in different flowers. The fertile part of the stamen is the anther and it produces pollen grains. The pollen grain is a structure that produces male gametes (male sex cells). Similarly within the ovary ovules are present, and each ovule produces one egg cell or female sex cell. Fertilization occurs when a male and a female gamete cell fuse together within the ovary. The fertilization process in the ovary leads to various changes in flower and that ultimately leads to the formation of fruit.

Structure of Pollen grain and its development 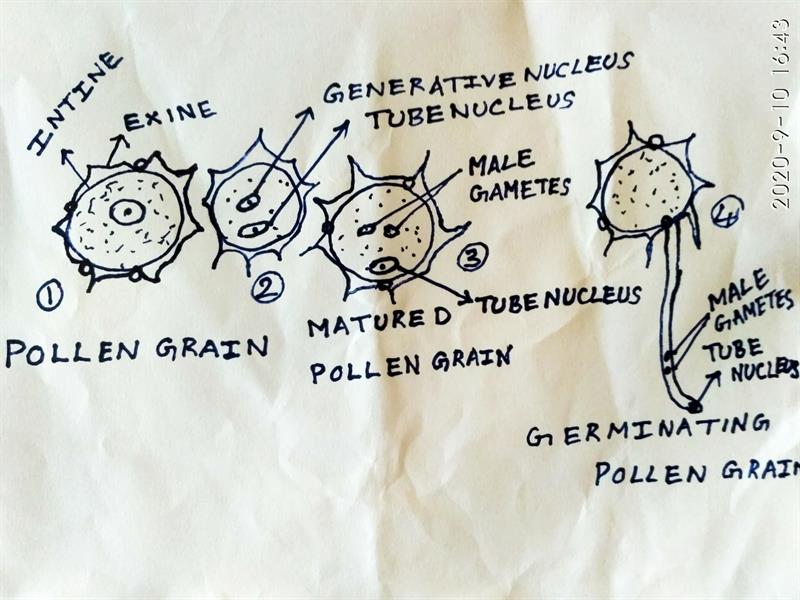 Structure and development of Pollen grain (Diagram by the Author)

Structure ovary and female gametophyte at the time of fertilization

Ovary, style, and stigma are the female reproductive parts of the flowers. All these parts aid in the process of fertilization. Stigma is the receptive part of pollen grains and thus aids in the pollination process. The stylar canal of style allows the pollen tube from germinating pollen grain to travel and reach the embryo sac to complete the act of fertilization. The ovary is the part where the ovule is located and in which the egg develops. 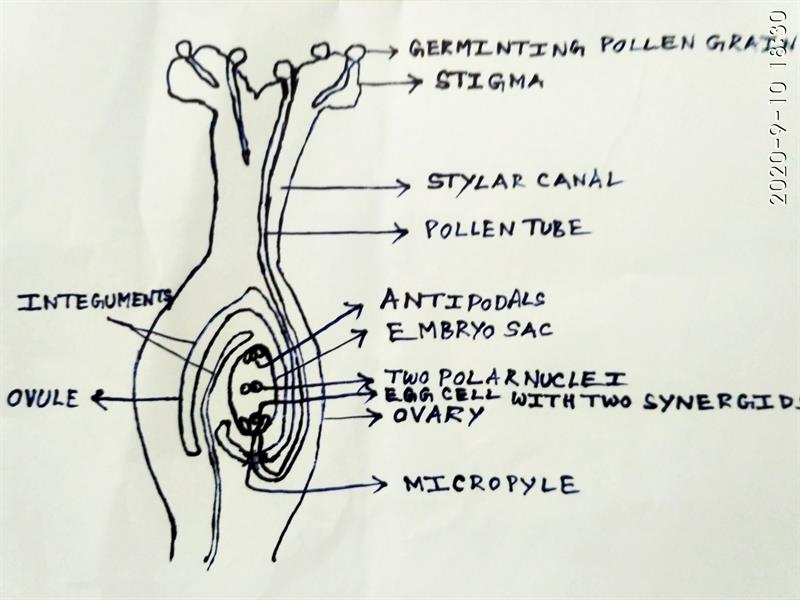 Germination of the pollen grain and fertilization (Diagram by the Author)

Ovule is present in the ovary attached to it by a connection called the placenta. The ovule is surrounded by two protective coverings called integuments. These integuments leave a small opening at one end called micropyle. Inside the ovule, a large sac-like structure present called embryo sac. The embryo sac is surrounded by a nutritive tissue around it called nucellus. The end of the embryo sac facing towards the micropyle is known as a micropylar end and the opposite end of it is known as the chalazal end. In the embryo sac, a total of 8 cells present at the maturity of the female gametophyte. An 8 celled reduced female gametophyte in Angiosperms is considered to be one of the highly advanced features of this group of plants. Out of the 8 cells in the embryo sac, 3 cells are situated at the micropylar end of the embryo sac. At the micropylar end, one enlarged egg cell surrounded by two synergid cells are present. The 3 cells together at the micropylar end are known as egg apparatus. The egg cell involves the fertilization process while the synergids facilitate easy entry of the pollen tube and also help to protect the egg cell. The three cells that are present at the chalazal end are known as antipodals. These cells have no role in the process of fertilization and sooner or later they get disintegrated. In the middle of the embryo sac, two polar nuclei are present and they fuse together to form a secondary nucleus just before the time of fertilization making the gametophyte to be a 7 celled structure.

Pollination is the transfer of pollen grains from the anther to the stigma of a flower. This pollination occurs with the aid of various agents like insects, wind, water, animals, etc. This first step is essential for the second step of fertilization to occur. The process of fertilization in flowering plants was first studied by Strasburger in 1884.