Amoeba is a unicellular, free-living freshwater organism. The name Amoeba is derived from a Greek word that means change. This organism has no permanent shape and quite often it changes its shape and thus got this name. The scientific name of Amoeba is Amoeba proteus. Proteus is after the name of a mythological sea God, famous for changing his body shape. Proteus animalcule is the common name of Amoeba proteus. Amoeba was first discovered and described by Roselvon Rosenholf in 1775. A detailed account of the Biology of Amoeba was given by H.I.Hirschfield (1962).

The Amoeba appears to be the simplest possible independent unicellular living organism with a nucleus and cytoplasm. Despite its simplicity in the bodily organization, it can locomote, capture food, digest and assimilate complex food, egest undigested residues, grow, respire, respond to external stimuli, do excretion, and reproduce the same kind like any other higher organisms.

Culture of Amoeba can be obtained by placing a few pondweeds in a petri-dish and add water to it. Place a few grains of wheat and cover the petri-dish with a lid. Leave the petri-dish in a dark room for a few days till brown scum forms over the water. The culture prepared like that contain many Amoebae in it. Freshly brought pond water also contains Amoebae in it. Usually under the surface of weeds of aquatic plants, one can obtain Amoeba.

Amoeba proteus is a one-celled irregular shaped microscopic animal. It measures about 0.25 mm. to 0.60 mm. in diameter. Under a compound microscope, Amoeba appears to be an irregular, colorless, translucent mass of spec constantly changing its shape. 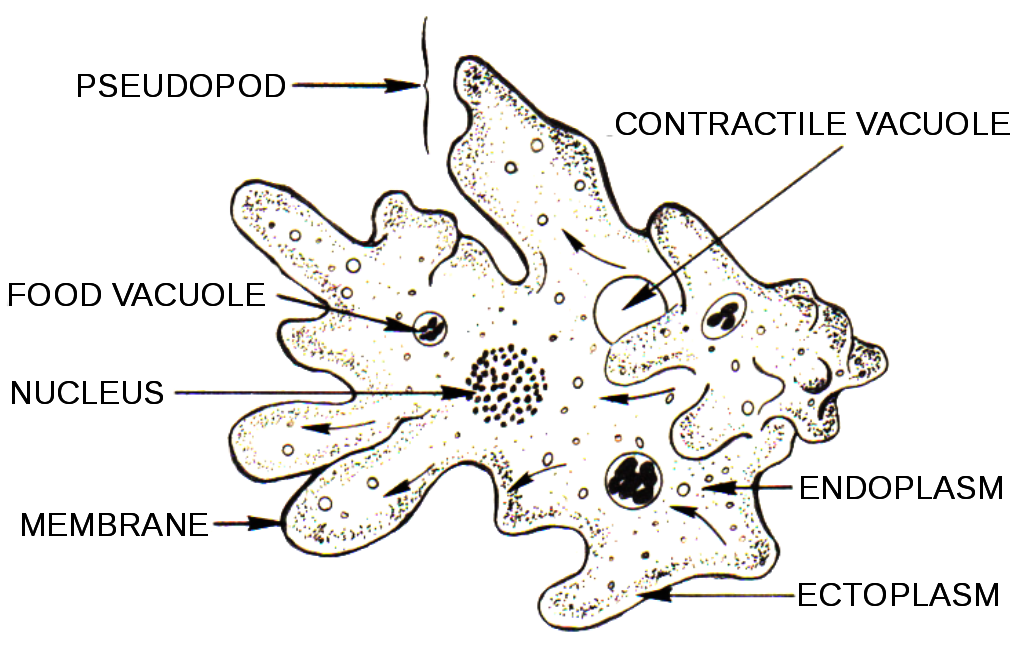 The outer surface of the amoeba organism is externally bounded by a living selectively permeable membrane called Plasmalemma or Plasma membrane. This membrane is made up of proteins and lipids.

Next to Plasmalemma there present a granular semi-solid colloidal substance called cytoplasm in amoeba. This cytoplasm can be divisible into ectoplasm and endoplasm. The outer clear rigid non-granular part of the cytoplasm is known as ectoplasm or ectosarc. The inner fluid granular part of the cytoplasm is known as endoplasm or endosarc. The ectoplasm consists of a semi-solid substance called plasma gel and the endoplasm consists of a viscous fluid called plasma sol. Plasma gel and plasma sol are interconvertible. Pseudopodia are formed by the sol-gel transformation of the endoplasm (cytoplasm) of amoeba. The conversion of gel into sol and vice versa is a physiochemical phenomenon. The movement of granules of plasma sol causing streaming is known as Brownian movement.

The outer surface of the body of amoeba is provided with blunt finger-like projections called Pseudopodia or lobopodia.Pseudopodia are made of plasmalemma, ectoplasm, and endoplasm. These are not permanent structures and they quite often disappear. These projections of amoeba help them to capture food and help in locomotion.

A single biconvex disk-like nucleus is present at the center of the plasma sol region of amoeba organisms. The nucleus contains about 500-600 chromatin granules. The nucleus is covered by a double membraned nuclear membrane made of proteins and lipids. All the vital activities of amoeba are controlled by the nucleus. The nucleus takes an active part in the process of reproduction.

Inside the body of amoeba, we may find 2 or more food vacuoles containing food molecules inside it. Food vacuoles are temporarily formed vacuoles and are meant for collecting, digesting, and excreting undigested wastes.

In amoeba, other than the above vacuoles a large number of small vacuoles are present in the cytoplasm of the cells called water vacuoles. These water vacuoles help in maintaining the water balance of the body.

The displacement of the whole body from one point to another is known as locomotion. Amoeba shows its locomotion with the help of its temporarily formed pseudopodia for this purpose. Scientists put forth various theories to explain the locomotion of the simplest single-celled organism amoeba. The most popular theories among these are Sol-gel or change of viscosity theory by Hayman and later it was supported by Mast and Pantin.

The following steps are involved in the locomotion of Amoeba:- 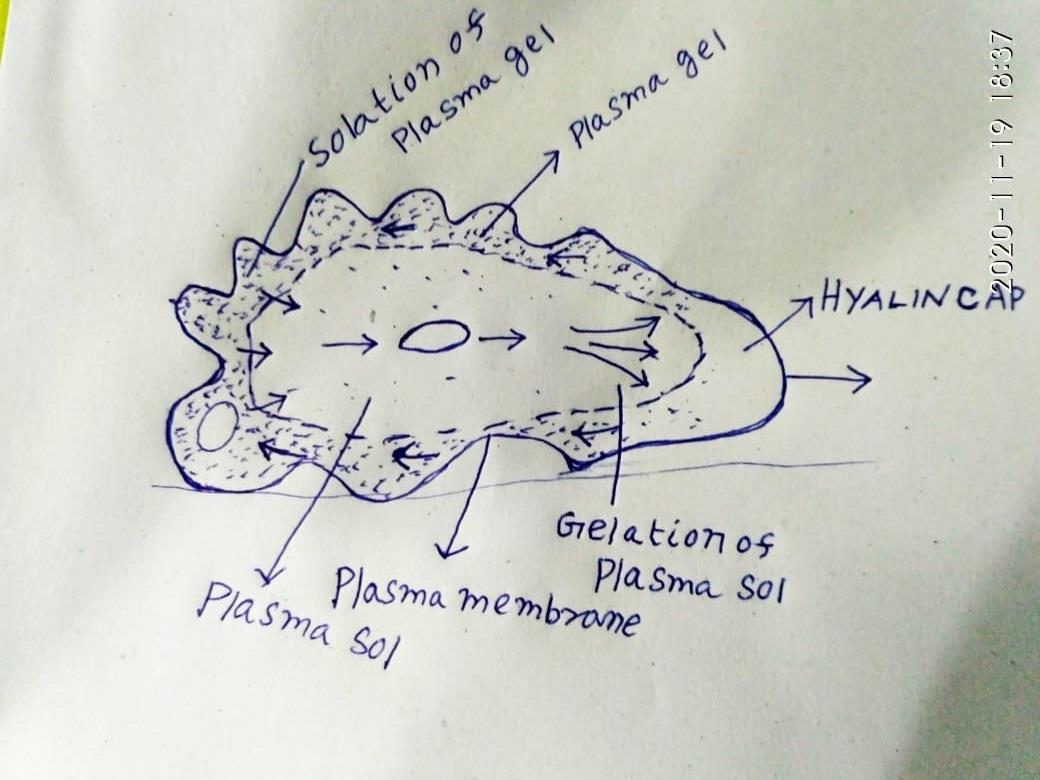 Contraction theory was postulated by Dellinger. According to this theory, Amoeba walks on substratum using pseudopodia as legs.

Surface tension theory was proposed by Berthold. It was supported by Butschli and Rhumbler.

The rolling movement theory was put forward by Jennings. According to this theory Amoeba verrucosa rolls on substratum like a water drop.

Although amoeba is the simplest single-celled organism, it follows the same steps of nutrition as in higher organisms. The mode of nutrition in amoeba is heterotrophic and holozoic in nature. It ingests solid food particles like bacteria, diatoms, and pieces of decaying plants and digests inside its body. So the type of digestion is said to be intracellular digestion in amoeba. 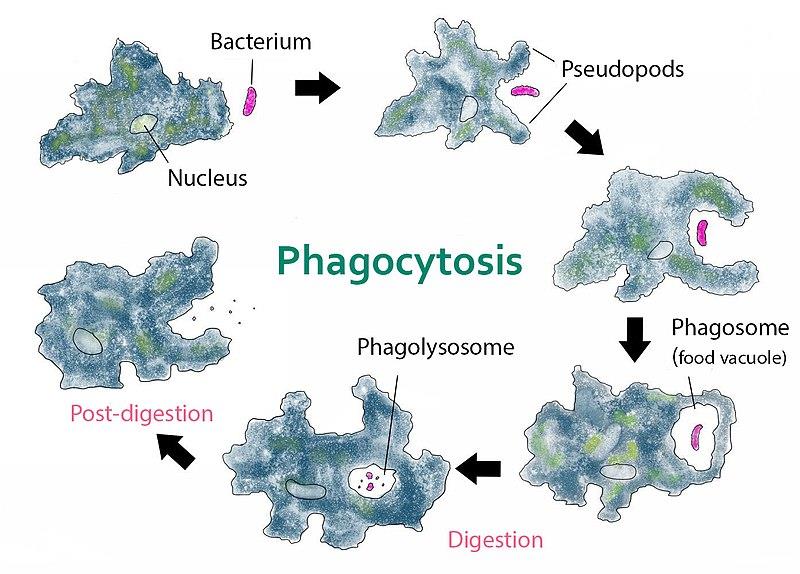 Amoeba mostly lives in ditches, ponds, and other bodies of standing water. The dissolved oxygen present in water bodies will be diffused into the body of amoeba through its general body surface by a simple diffusion method. By using this oxygen, the oxidation of food molecules occurs and thus ATP energy, Co2, and water are produced. The Co2 evolved during the oxidation of food is diffused out through its cell membrane.

The response to external stimuli is known as irritability and it is a characteristic feature of all living organisms. Amoeba responds to various external stimuli like temperature, chemicals, a strong beam of light, touch by a needle, etc. by moving away from the source of stimuli.

Amoeba excretes its metabolic wastes formed inside its body by a simple diffusion method through its cell membrane by expelling them to outside water. 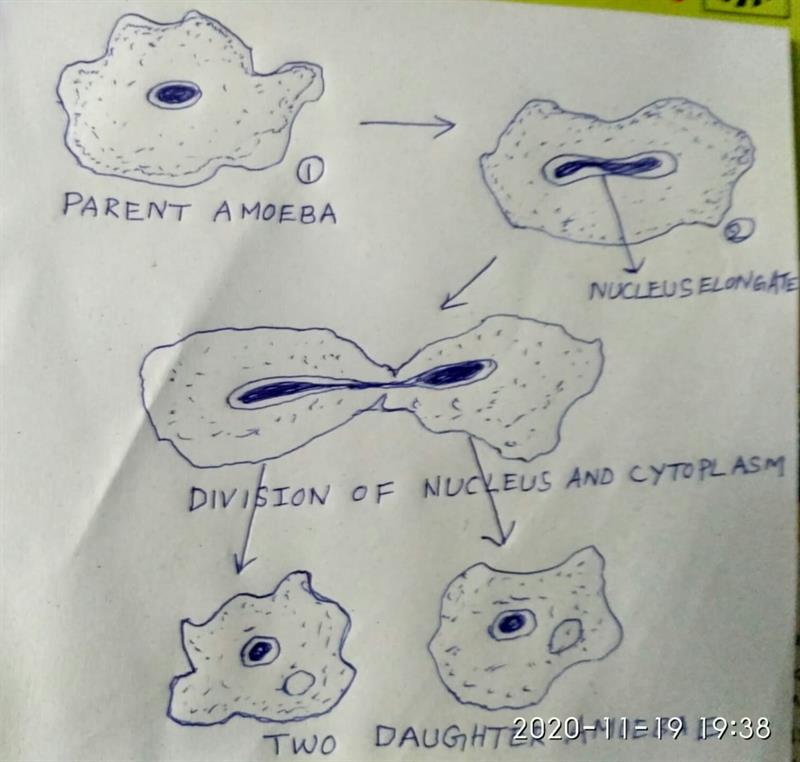 Binary Fission in Amoeba (Diagram by the Author)

This type of reproduction occurs under unfavorable conditions such as scarcity of food, lack of water, and high temperature. 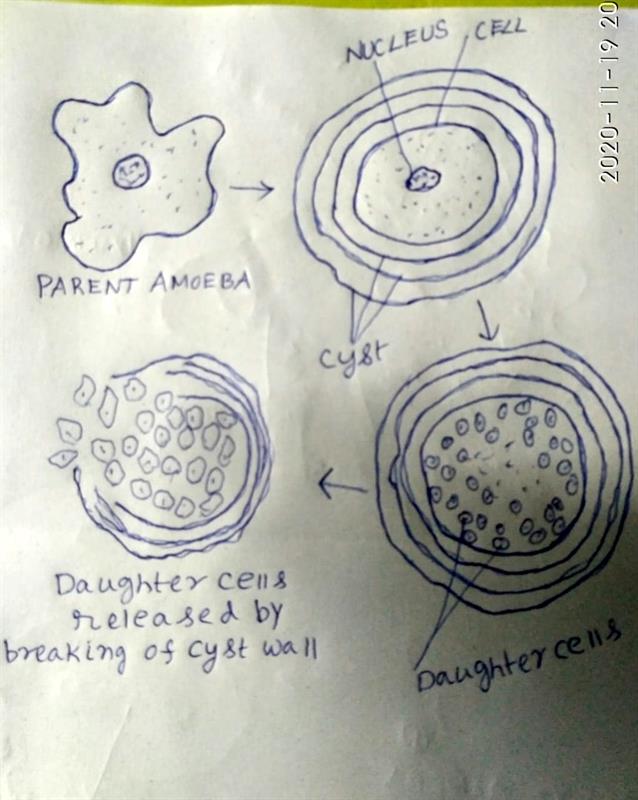 Multiple Fission in Amoeba (Diagram by the Author)

This process helps the amoeba to tide over unfavorable conditions like severe cold or hot, dryness, lack of food, lack of water, lack of oxygen, etc. The process occurs as follows:-

Power of regeneration of Amoeba

Amoeba has great power of regeneration. By accident, if any amoeba cut into two bits and if these cut bits have small bits of nuclei in them and they can grow and transform into new individuals.

Amoeba has no natural death. Amoeba always reproduces through asexual means. The parent amoeba always divides and gives rise to two daughter cells through binary fission. The protoplasm of the parent cell always gets passed on to its daughter cells generations after generation and thus there is no natural death for the organism. Thus amoeba is considered to be an immortal organism.


Here below a video to know more about Amoeba:-