Cabbage White Butterfly (Pieris brassicae) is a beautiful organism seen in crop fields, gardens, and parks. They commonly damage field and vegetable crops like Cabbage and Cauliflower. These butterflies also aid as a good pollinating agent to pollinate flowers in nature. The adult male and female butterflies are snow-white in colour. Usually, males are smaller than females. A female butterfly measures around 6.5 Cms. across its spread wings. A black patch can be seen on the apical angle of the fore wings of a female. But in the case of a male, black spots are present beneath its wings.

The body of this insect is divisible into three regions-head, thorax, and abdomen. The head includes a pair of compound eyes, a simple eye, and a pair of club-shaped antennae. The simple eye doesn't aid in image formation. The mouthparts (maxillae) are modified into a proboscis to aid in sucking plant juices and nectar.

The thorax region is divided into three regions-prothorax, mesothorax, and metathorax. The thoracic segments are provided with keeled legs and wings. Two pairs of wings and three pairs of legs are present in butterflies. The wings move up and down with the contraction and relaxation of flight muscles situated in the thoracic region of the butterfly. The wings will be held in a vertical position when butterflies are at rest.

The abdomen region includes ten segments and out of which two are modified into reproductive structures. Nine pairs of respiratory openings called spiracles are present on the lateral sides of the thorax and abdomen. These spiracles are then connected to a network of branched tubes called tracheae to form the tracheal respiratory system. Exchange of respiratory gases occurs between the body tissue and thin tracheal tubes by simple diffusion. Anus lies towards the posterior tip of the abdomen. 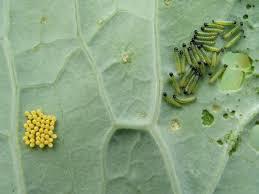 The female butterfly lay fertilized eggs in groups of 50-80 and a total of 160-170 eggs on the ventral surface of leaves of cabbage and cauliflower, etc. after mating. The eggs are attached to leaves with the help of sticky secretion produced by the female. The eggs are usually pale yellow in colour, conical or oblong , have ridges and grooves on their surface, and measure around 1 mm. in length. As these eggs are located on the undersurface of leaves, they are protected from heat and rain. The incubation period of these eggs varies in different seasons. The incubation period may be as short as 3-4 days in some seasons or maybe as long as 17-18 days.

The butterfly larva is commonly known as a caterpillar. it can be seen most commonly on leaves and twigs of plants. The caterpillars usually come out of eggs after hatching with the requisite incubation period. After hatching the larva eats its eggshell first and then nibbles at young leaves with its strong toothed mandibles. The caterpillar is usually long and cylindrical with a greenish or yellowish colour body. Black markings can be seen on the surface of its body. The colour of its body blends with its surroundings and help to protect it from its enemies. This phenomenon of protective colouration is known as camouflage. The caterpillar feeds heavily on leaves with strong mandibles of its mouth. Mandibles of the mouth are used to bite and chew food. 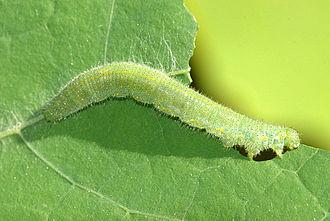 The body of the caterpillar can be divisible into the head, thorax, and abdomen. The head bears five pairs of simple eyes, a pair of small antennae, and strong mandibles in its mouth to bite and chew leaves.

The three thoracic segments include a pair of keeled legs on each of its segment. There are nine pairs of spiracles present on its body. One pair of spiracles are present on the first thoracic segment and the other eight pairs are present on the first eight abdominal segments. A pair of fleshy projections called Prolegs located on 3rd to 6th abdominal segments. Prolegs are not jointed legs and are meant to hold substratum during locomotion. On the tenth abdominal segment, a pair of prolegs called claspers are present in the caterpillar and are used in anchoring. The caterpillar moults 4-5 times during its growth. The larval period lasts for 15-40 days. 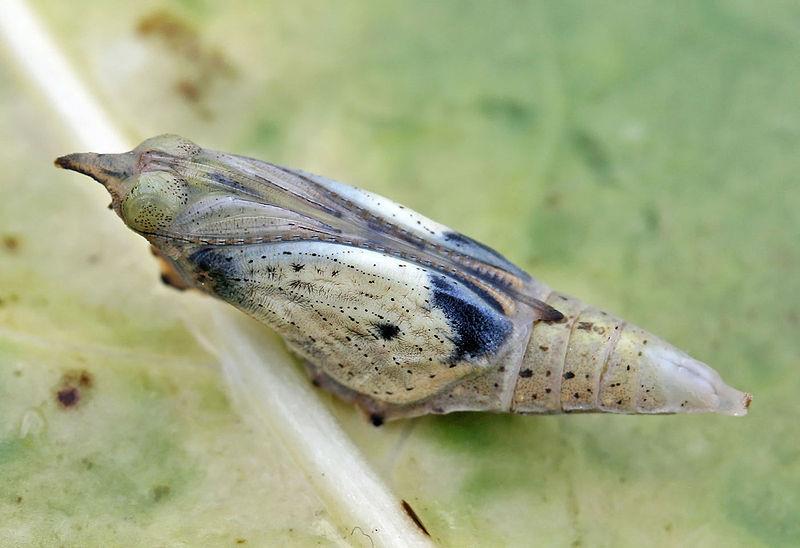 The fully developed caterpillar leaves the cabbage plant and shelters the dry branches of other plants. The pupae of the butterfly is a resting stage and usually covered by a protective covering called a cuticle. This protective covering stage is known as Chrysalis. This is also known as the cocoon stage. The pupa is shorter than the caterpillar. Many vital changes occur in the pupa stage of the butterfly. Formation of proboscis in place of mouthparts, degeneration of prolegs, the formation of long club-shaped antennae, wings, compound eyes, etc. are the major changes that occur in the pupa stage. Usually, the pupa stage lasts around 7-10 days in the life cycle of a butterfly.

After completion of the pupal stage, the cuticle splits in the thorax region and the adult emerges out. In the beginning, the wings appear to be crumpled and damp. Slowly they expand as the blood gushes into veins and then they become hard and dry. After two hours the butterfly attains the strength to fly.

The series of changes that take place from the larval to the adult stage is known as metamorphosis. The development of butterflies from larvae and pupae into adults through a series of changes what we call metamorphosis. During their development, caterpillar undergoes 3-4 times moulting or ecdysis under the influence of a moulting hormone called ecdysone. Butterflies show a complete type of metamorphosis include juvenile stages and adults often live in distinct habitats, have different habits, and are usually exhibit different forms.

Differences between adult individual and the larval stage


How Butterflies differ from Moths?

Butterflies and Moths are an evolutionarily related group of insects. Some of the strong identifiable distinctive features were given below.

Here below is the video on the Cabbage Butterfly Life cycle:-

This is a very informative and well presented article. Cabbage butterfly lifecycle is a very interesting biological study and from this we learn a lot about these butterflies and the time they take in becoming an adult. This information is very useful from the point of view of taking prevention from these so that the crop is not damaged by them. These butterflies are very fast in cutting the soft crop of the vegetables and we have to take proper precautions so that they are controlled before they do the harm. There are many insecticides that are available in market to control different types of butterflies especially which are harmful to crops. Generally we use these insecticides along with a vegetable soap oil spray which controls these insects easily.