The way by which an element or compound moves between its various living and non-living components and locations in the biosphere is called the Biogeochemical cycle. Actually, carbon compounds are interchanged between the biosphere, pedosphere, hydrosphere, geosphere, and atmosphere of the earth.

All living beings in nature are mainly composed of organic compounds like carbohydrates, proteins, fats, and nucleic acids. The carbon element is the most important constituent of all these compounds. Carbon is the most important element of the living material protoplasm. Other than in living beings, carbon is present in various forms in the physical environment. CO2 is present in the earth's atmosphere, beneath the earth's crust, and in deeper depths of oceans.

The carbon cycle is a biogeochemical cycle in which through a series of chemical steps, the chemical element carbon is removed from CO2 from the atmosphere, used by living organisms in their body activities, and is finally returned to the atmosphere.

Carbon is present in different forms in our environment - as CO2 in the atmosphere, below the soil surface, and in water bodies like Seas, Oceans, rivers, lakes, ponds, etc. All these sources act as CO2 reservoirs.

The carbon is present in fossil fuels like petrol, coal, natural gas, etc. Carbon is present as carbonates in rocks in the earth's crust. When these stones containing carbonates are burnt, carbon content will be released into the atmosphere.

Carbon present in the atmosphere in the form of CO2 enters into the plant body as carbohydrate through photosynthesis and then passed on to herbivores and then into carnivores and decomposers. So all living beings also possess carbon content in their body and thus they are a part of the carbon biogeochemical cycle.

The following are the major steps in the Carbon cycle that help to maintain carbon elements in the earth's environment. 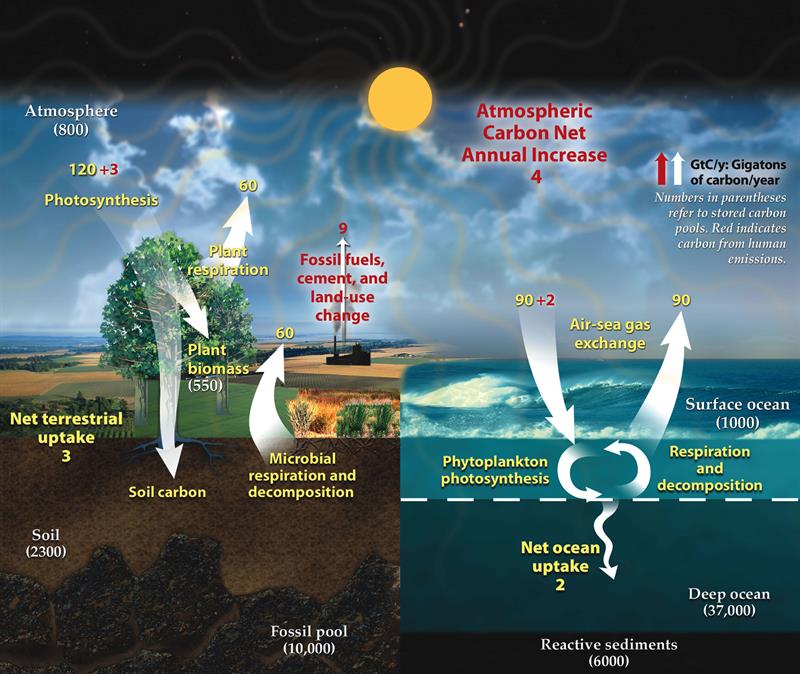 Similarly, the shells of molluscan organisms like snails, oysters, etc contain large quantities of CaCO3 in them. When these animals die, the shells of these animals were carried to the shores by tides and get deposited as limestone. To get lime, limestone will be burnt in Lime Kilns at high temperatures. During this process, CO2 gets released into the atmosphere. The burning of anything like fossil fuels or limestone to release CO2 into the atmosphere is known as combustion.

The carbon present in the atmosphere as CO2 is the basic source of carbon that will be fixed by green plants as carbohydrate food. This carbon content of plants is then passed on to herbivores and then successively into small carnivores and then into big carnivores. After the death of these plants and animals, decomposers breakdown and return CO2 from this process into the atmosphere. All living beings through the respiration process return CO2 to the atmosphere. The fossil fuels formed from dead plants and animals through the fossilization process, when burnt during their utility results in the addition of large quantities of CO2 into the atmosphere. Similarly, when limestone deposits are burnt in big kilns, a large quantity of CO2 is added to the atmosphere. This is simply how the carbon cycle works in nature.