Mathematics is a big subject and geometry is one of its branches. In basic geometry, we learn about things like line, triangle, rectangle, circle, ellipse, square etc. They depict different shape in a two-dimensional space. These shapes we see everywhere around us. In buildings, in equipment, in arts and crafts, in children playground etc. To understand them and to calculate the area covered by them we use Mathematics to a great extent and all the calculations in the engineering disciplines especially architecture, civil, and mechanical streams are based on those basic concepts and formulas.

What is a circle

A circular shape is the most interesting symmetrical shape that we perceive time to time at various places and if we focus our attention on how it is formed and what are the characteristics of this figure then we will find certain interesting things about it.

Every circle has a centre. What is it? It is a point within the circle from where each point on the circle is at the same distance. In Mathematics, we call this distance as the radius of the circle. It is generally represented by r. This entity, called r, is very important and interestingly if we know the value of r we know all about the circle.

Sometimes, we want to draw some circles just as a hobby to make some art or drawing but we do not have a protector then the easiest thing is to take the lid of a round storage container of the required size available in the kitchen and keep it firmly on the paper and just draw with pencil or pen along its outer side with a steady hand and a nice circle would be formed. We can see some circles and circular shapes, as depicted in the figure below, available in our household items. 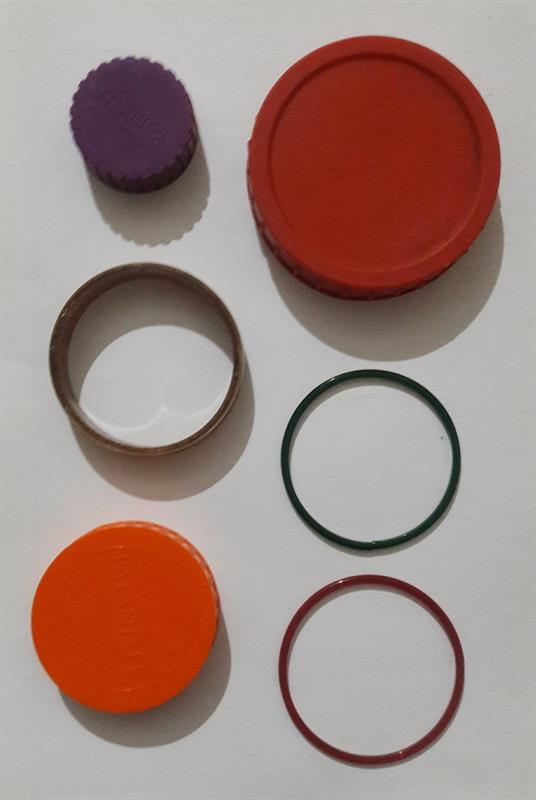 Relation between the radius and diameter of the circle

If we draw a straight line from one point of a circle through the centre then it will meet the other side of the circle at some point and the distance between these two points is called the diameter of the circle. It is represented by d. It is obvious that the diameter of the circle is two times its radius. So the first formula that we get in connection with learning about a circle is -
d = 2r
It is a simple formula but it is very useful in practical calculations related to circles anywhere in any situation.

Relation between radius and circumference of a circle

This is a very interesting topic and intrigues many. If we measure the length of the curved portion of a circle then it is called the circumference. It is difficult to measure it with a common scale but for the purpose of understanding take a circular rubber band and cut it at one place and when it becomes straight we can measure it to find the circumference of the circular rubber band. There is a relationship between the circumference of the circle and its radius. Ancient scholars found it and surprisingly it was found that whether the size of the circle was small or big this relationship was in the same ratio which means that it could be depicted by a formula. This was a great finding and it implies that a formula exists between the value of the circumference and radius of any circle. It was found that the relationship was -
Circumference = 2 pi r where pi (pronounced as pi) is approximately equal to 3.14 though its precise value is 3.1428…. but can be approximated to 3.14 for convenience of calculations. The discovery of this formula is a great leap in the world of Mathematics as simply knowing the radius of a circle we can find its circumference. It has many practical applications. 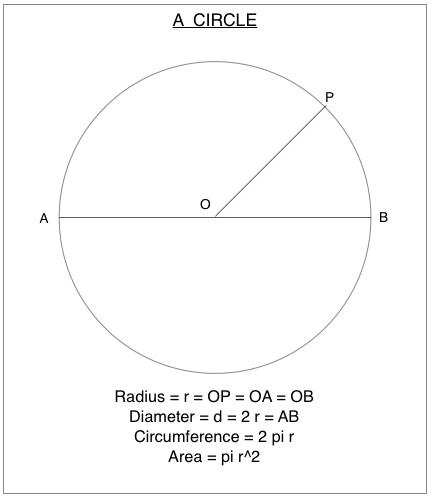 Example: We know that Earth revolves around the Sun in almost a circular path and the radius of that path (the distance between the Earth and the Sun) is very large about 147.4 million km. So we can find out the circumference or the length of the path that the Earth travels in completing one circle around Sun which is nothing but the distance travelled by Earth in 1 year time around the Sun. Let us calculate this distance. Using the formula Circumference = 2 pi r, we get that the distance travelled by Earth in one round is = 2 x 3.14 x 147.4 ==> 925.7 million km. So our Earth travels a great deal in 1 year time!

Relation between the radius and area of the circle

Different geometrical shapes are there like square or rectangle or ellipse or triangle and each of them has a formula in Mathematics for finding its area. For example, the area of a square is square of its one side. A square having sides equal to 40 cm has an area of 40 x 40 ==> 1600 sq cm. Likewise, the circle also has a formula for its area and it is given by ==> pi r^2.

These formulas about the circles are useful in many ways for calculations. There are many practical applications of these formulas associated with circles.

For example, we can calculate the area of a circular park. What we will do is measure the circumference of the park with a flexible measuring tape and then we know that it should be equal to 2 pi r and from this we can find out r. Once we have found r then we can use the formula (area of a circle = pi r^2) to find out the area. There are many such usages of finding areas of the circle in science and technology.

Circles are the important geometrical figures and knowing about them in details in useful for scientific and technical works where circles are appearing in the drawing or equipment in one way or other.