The teeth are the hardest parts of the human body meant for biting and chewing food. The teeth of the human body are said to be thecodont type as they are enclosed in the sockets of bones. Human teeth are also known as heterodont type as they have more than one type of teeth, differing in size, shape, and function. Human teeth are said to be the diphyodont type because two types of teeth exist in one's lifetime. The two types of teeth are deciduous teeth (milk teeth) and permanent teeth.

These teeth are also known as primary teeth or milk teeth. These teeth start developing when the fetus is 2.5 months old. They start appearing externally when the baby 6-8 months old. As each teeth grows, it pushes out of the gums, and that what we call it teething. By two years of age, the complete set of 20 milk teeth appear in the child.

In humans, between six and twelve years of age, all milk teeth are replaced by permanent teeth. Four different kinds of permanent teeth are present throughout their life in adults. They are incisors, canines, premolars, and molars.

These teeth are located on the front side of each jaw meant for biting and cutting the food. There are four incisors present in each jaw, two each in two halves of each jaw. These teeth are characterized by sharp chiseled cutting edge and the teeth have a single root canal. The central incisors of the lower jaw are considered to be the smallest permanent teeth in our mouth.

There are two canine teeth in each jaw, one on each half of the jaw located next to incisor teeth. They are long, conical, sharp ant pointed teeth meant tear fleshy food. These teeth also have only one root. These are usually absent in herbivorous animals as they do not eat the flesh like a rat but well developed like in dogs.

They are four in number in each jaw and are present next to canines on each half. These teeth are provided with a large broad, humping surface. The small surface humps of the teeth are known as cusps. As premolars include two cusps on their teeth, the premolars are popularly known as bicuspid teeth. The premolar teeth are provided with one or two roots for them. They help in mashing, crushing, and grinding the food.

There are six molars present in each jaw and 3 on each half of the jaw. Molars are larger than the premolars and are usually have 3-5 cusps. The last molar on each side of the jaw is known as wisdom teeth. These teeth develop only in adult age usually around 25 years. Molars usually appear in adults in their early twenties. Like premolars, molars also help in crushing and grinding food.

The development of teeth and their arrangement in the mouth is known as dentition. The dentition of an individual species of the organism depends upon the diet and feeding habits of the organism.

Dental formula in a human adult

Dental formula in a human child

Dental formula in a young human

Human has a fixed upper jaw and movable lower jaw. Teeth are embedded inside the bony sockets or alveolus of the jaw. Each tooth consists of three parts namely, Crown, Neck, and Root. 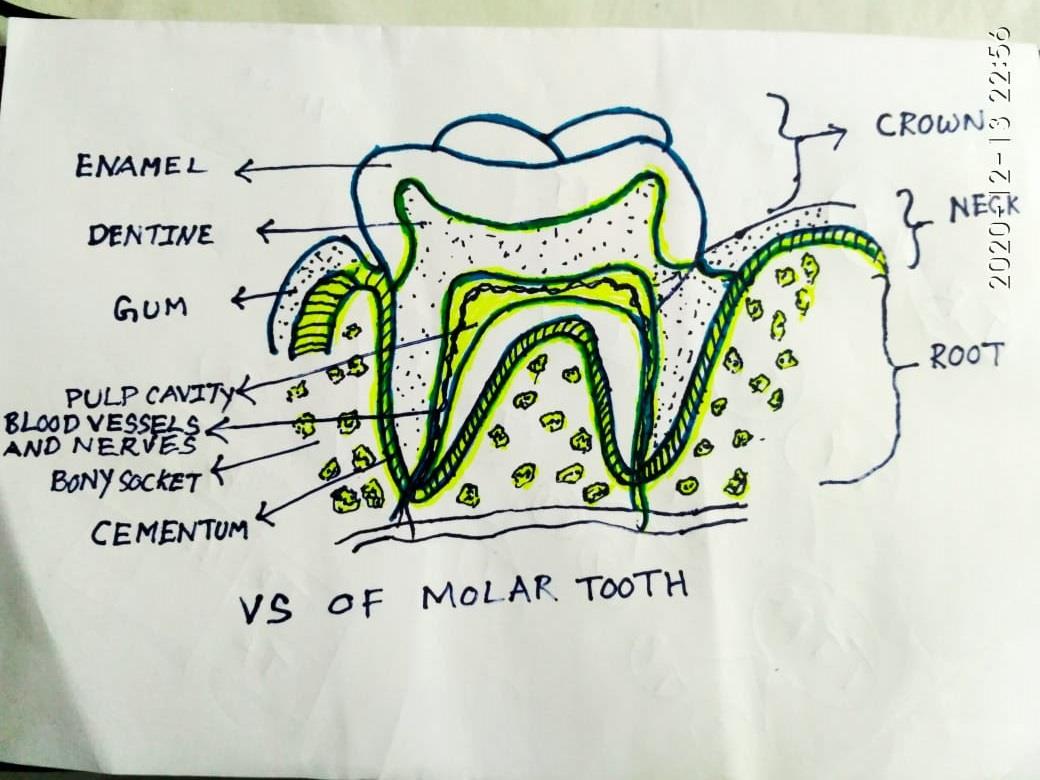 Anatomy of Human Molar Tooth (Diagram by the Author)

The visible part of the tooth that is exposed beyond the gum is known as the crown. It is covered with the hardest substance of the body called enamel. Calcium, phosphorus, and small amounts of water are the constituent parts of enamel. The enamel helps the tooth to withstand very high pressure while the tooth is cutting, biting, and grinding the food. The enamel is white in colour and may get wear out with age. As it wears out the tooth appears to be yellow in color as the dentin below the enamel gets exposed.

Below the enamel, a hard yellowish bone-like tissue made up of minerals, living cells, and water present is known as dentin. Dentin is also hard but not as hard as enamel and can decay.

The basal part of the tooth that is embedded in the jaw bone and that holds the tooth firmly in its place. Dentine forms the bulk portion of the tooth. There lies a pulp cavity in the dentine that encloses sensory cells, nerve fibers, and blood vessels. The pulp cavity can be divisible into the pulp cavity located in the crown and the root canal in the root.

The dentine in the root region is covered over by a hard material called cement or cementum. It is mainly composed of minerals and water. This layer of hard material meets the enamel layer of the crown in the neck region. Cement material help to hold the tooth in the socket firmly in its position.

Periodontal ligaments are very short fibers that extend through cement into the bony socket and helps to anchor the tooth. It also absorbs shocks while chewing.

The loss of our permanent teeth is mainly due to dental decay and gum disease.

Decay of teeth occurs when small cavities form in the enamel. The bacteria present on the surface of our teeth are the cause for the formation of these cavities. The acids produced by the bacteria on the tooth surface will dissolve the calcium salts in the enamel layer causing cavities. The acids produced by bacteria will reach the pulp cavity through cavities and irritate the nerve endings that cause tooth pain. The only way to get over this problem is to remove the affected tooth. One best way to avoid tooth decay is to avoid eating sugars more frequently and thoroughly washing your mouth after eating.

Usually our teeth are covered by a layer of saliva and mucous. The bacteria present in this layer by its activities builds up a coating over the teeth called plaque. The plaque layer becomes still hard due to the deposition of mineral salts of calcium and magnesium. If this bacterial plaque is not removed periodically, it spreads into the gaps between gum and enamel causing inflammation called gingivitis. This disease causes redness, bleeding of gums, and bad breath. If gingivitis is not treated in time, the fibers holding the tooth in the jaw get destroyed, and the tooth become loosened and falls out is the final result. This diseased condition is known as periodontitis.
A deficiency of vitamin D is associated with enamel defects and an increased risk of dental caries


Here is a video on the structure of the human teeth:-

It is a matter of great interest and fact that teeth are the main part of our anatomy and without proper teeth formation our face and personality would look odd. Through this article the author has come up with details of the uses and upkeep of the same as many teeth would form and fall during their life expectancy time and the person needs to take care of teeth when its about to fall. What I have noticed invariably is that those who are diabetic patients tend to lose a tooth at regular intervals and by the time they attend the retirement age, they are with few teeth or nothing. So to avoid such a situation, a regular check-up of the teeth is necessary and if possible we have to replace other teeth or take care not to allow the loose teeth beside it to fall. If such precautions are taken then the life of the teeth can be extended.