Electricity is among the most significant gifts that science has bestowed upon humanity. It seems to have become an integral element of modern life, and it is difficult to imagine a world without it. Electricity serves a variety of purposes in our daily lives. All of these give people a sense of security and sustainability.

Compared to the primary energy sources, electrical energy is effective, efficient and clean, but some of the methods of producing it are not ecologically clean. It is easily transportable, but it can't be stored at a larger level. It is a controllable and convenient form of energy; once created, it must be used in the current technological environment. 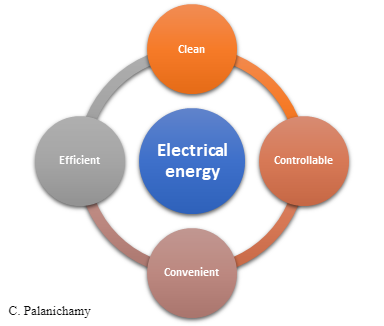 Energy is a necessary component of production, and it is required in order to maintain current levels of income development and to also expand and promote economic growth. The replacement of other inputs with energy may also have macroeconomic constraints. Tools, machines, and factories require a constant flow of materials and energy to create, operate, and maintain. Humans who direct capital production use the same amount of energy and resources. As a result, producing more energy replacements necessitates a larger quantity of the item being replaced.

According to the Energy Information Statistics, global energy consumption is increasing at a rapid rate than global people, resulting in a rise in the mean value of electricity utilized per inhabitant (per capita electricity consumption). Energy usage rises in tandem with population growth. It has been hypothesized that the quantity of energy sources available determines the size of the population that the planet can support. With most existing fuel sources nearing their maximum reserve and the hunt for viable and sustainable equivalents progressing, it's vital to examine how population expansion influences energy consumption. In my perception, more people, not necessarily more energy.

Electric power consumption refers to the amount of electricity produced by electrical generating stations and the combined heat and power plants after deducting the power line losses (transmission and distribution) and power consumption by the sources themselves. Or, in other words, it is the net energy or power available after the power loss for usage, which will be less than the power produced.

It has traditionally been used by economists to gauge economic success. Its growth indicates that the economy is in excellent condition and that the country is advancing. On the other hand, if it falls, the economy may be in risk and the country may be losing progress.

GDP is determined by combining all of the total expenditure in a particular period by individuals, companies, and the government. It could also be computed by totaling all of the money received by all of the economy's players.

What is per capita electricity consumption?

For a country, the measure of electricity consumption per capita is regarded as one of the most significant indicators of energy security, indicating the availability of safe and sufficient energy supplies for domestic consumption and overseas commerce. Besides, it is a key indicator of a country's progress in terms of electrification. In general, while the industrialization process accelerates, electricity consumption rises quicker, and when the process is done or near completion, demand falls swiftly.

Changes in the economy's structure, such as moves to more energy-intensive industries, as well as changes in service demand, such as rising requirement for cooling and ventilating appliances, are likely to account for increases in per capita electricity consumption. Efficiency improvements, such as more efficient lighting, somewhat offset the rise in demand caused by these causes. Outsourcing energy-intensive sectors to other nations has had a regional impact on per capita electricity usage in several nations.

Global electrical energy consumption is rising in tandem with economic expansion, although the relationship varies by nation. Growth in per-person economic activity may happen without corresponding increases in per-person electricity consumption. It is conceivable in nations with big, developed markets, substantially balanced household electricity consumption, and a comparatively small proportion of productivity increases due to industrial activity. It is not necessarily necessary to use more electricity to provide a higher-value service than to provide a lower-value service.

Per capita electricity consumption vs GDP per capita 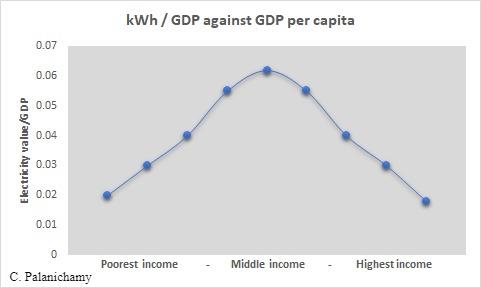 Per capita electricity consumption vs GDP per capita

Let's see the reasons for such an unwanted situation in our nation.

Why is it shocking?

The examination of India's alarming trend in per capita power consumption in recent years is an excellent field for doing Electrical Power Systems Engineering research in order to obtain a PhD with financial help. Due to the scarcity of research results in this field, there is a significant need for both the electrical sector and commercial firms that provide power industry consulting services. I confined myself to a few points of analysis of the low per capita electricity consumption, which would be useful for the candidates aiming at research besides the society caring about our country's growth.

This article provides you valuable information about solar energy, its advantages and its applications.

Non-renewable sources of energy and types of fossil fuels

This article provides the basic information about the various types of prime movers which are used to produce the mechanical power in our day to day life. It also includes the different sources of energy used by prime movers.

A steam turbine is rotary machine which is designed to convert the energy of high pressure and high temperature steam into mechanical power.The operation of steam turbine wholly depends upon the dyanamic action of the steam.