Understanding the concept of inferior goods

It must be noted that there is no such specification that which commodity is inferior good.

This positive price effect can be understood with the help of the following example:
In general, a society consists of three classes of people, lower class or poor, middle class and upper class or rich. Now let us suppose that Mr A belongs to the upper class, Mr B belongs to the middle class and Mr C belongs to the lower class. Mr A can afford both meat and bread in his diet, Mr B can also easily afford bread and sometimes meat also but, Mr C can hardly afford bread. Now due to sudden inflation in the country, prices of both bread and meat rises. Mr A can still afford both the commodities, Mr B who earlier sometimes affords meat, now can only afford bread and hence he spends all his income on bread due to which additional consumption of bread rises. Mr C continues his consumption of bread because in an economy consumption pattern of a consumer can't be zero.

Why termed as "Giffen paradox"?

The literal meaning of paradox is "a contradictory statement". This contradiction can also be understood with the help of an example. Suppose Mr A went to a vegetable market and enquires about the price of potatoes and to that seller the replied, "price of one kg potato is Rs 50. Mr A shocked to see that and said to himself, "potatoes are so much expensive."
When he further enquired about the price of other vegetables he came to know that all are relatively expensive than potatoes. Now again he said, "potatoes are the cheapest". Hence, a consumer makes a contradictory statement. Therefore, even after rising prices of Giffen goods, they are relatively cheaper than other goods which lead to an increase in their demand. 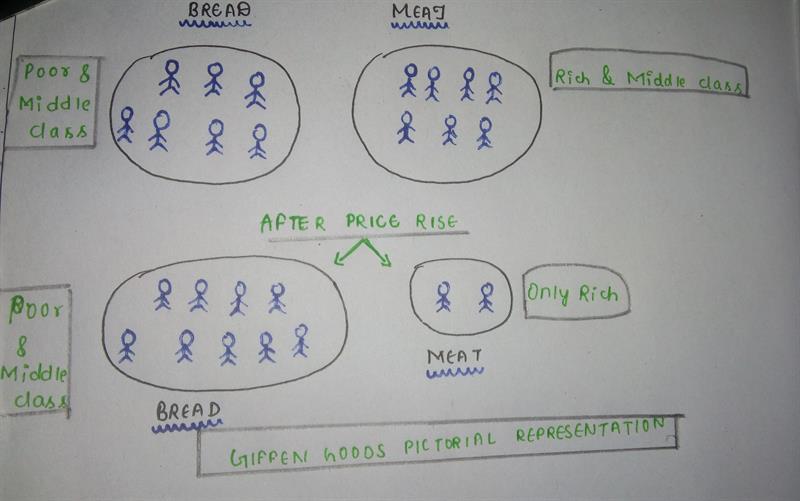