Most science students have heard about the "Doppler effect", probably in physics. Let's consider the following scenario: a car is continuously honking while approaching you, noise becomes more when it finally approaches you, you move aside to save your life and the car honks again but with less volume and finally, it moves past you, and honks again to another person few steps away from you, Now with very less sound.

Do you think generally horns have a volume control like in music systems? No way. What is the reason behind this change in the frequency of the sound? Interesting right? This is just because of the so-called "Doppler effect". Thanks to Christian Doppler an Austrian scientist, who successfully explained this phenomenon back in 1842.

What is the Doppler Effect?

What is the formula for the Doppler effect? 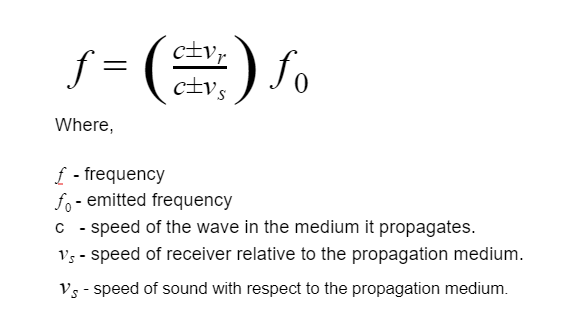 This is the general formula for the Doppler effect. There are many other equations applicable to various fields of science.

Ever wondered how traffic police can know your vehicle speed accurately? He will be having a radar gun, a device used by cops to catch over speeding vehicles. This gun-like device has two main components such as a transmitter and a receiver. When the gun emits the wave and hits the vehicle and bounces back to the device, the receiver will read the radio wave frequency and calculate the actual speed using the Doppler formula.

We are all familiar with sirens like those on ambulances, fire trucks, or government vehicles. We hear the pitch change as they distance themselves from us. This is due to the doppler effect. Our ears do not hear the same pitch as a vehicle approaches or recede because we are not in the same line as it moves. It moves angularly with the observer. To determine the speed accurately, the radical component or the angle formed between observer and source has to be taken into account. 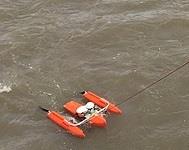 With the aid of a piezoelectric transducer, an ADCP uses the doppler effect to measure the speed of the water at a particular depth by sending and receiving sound waves. The sound produced by this device is uniform in frequency, which is beyond the human hearing range, such as 38KHz. Sound waves have reflected the device by moving particles under the surface of the water. The whole process determines not just the speed of water but also the objects within it.

Change in air pressure causes sound. The First Doppler effect was used on a Hammond organ using a Leslie speaker attached to it. To improve audio quality, digital audio production companies use Doppler effects plugins. This effect also can be used to change single/dual audio formats into multi-channels.

Above are the five main uses of a popular physical phenomenon, the Doppler effect. This shift occurs in everyday life, but unnoticed. The Doppler effect can be used in a vacuum or in the presence of any medium. In recent decades, scientists have begun to use the doppler effect to predict the movements of planets and satellites in orbit.

Origins of Physics and its application in various fields

Physics is one of the oldest branch of science. The basic principles of physics explain almost all the natural phenomenons that we come across everyday. The basic principles have also been used in chemistry and other branches of science. Physics is one of the primary pillars on which the whole framework of science stands. Without Physics its impossible to explain most important phenomenons in the universe. This article provides an in depth valuation on the subject of Physics.

How to measure the AC source frequency using sonometer and electromagnet

This is an exhaustive article on Doppler Effect. This effect is very much perceptible in the spectrum of distant stars which the astronomers see with the help of powerful telescopes. What happens is that when a star is moving away from the observer on the Earth or coming towards us then the frequency of the light emitted by it which we record on a precision radio telescope changes slightly. So the light waves produced by the moving body would get compressed towards us or stretched outward from us. The result is that when the star is moving towards us its spectrum slightly shifts to the blue side while in the reverse case when the star is moving away the spectrum looks slightly redder. This shift in the spectrum is very useful for calculating the speed of the heavenly bodies which are involved in these measurements. So, Doppler Effect is also very useful in stellar and astronomical observations and measurements.