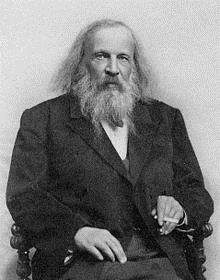 There are eight vertical columns in Mendeleev's original periodic table which are called groups. These vertical columns represent I to VIII group each group is divided into two subgroups A and B. There is quite a similarity between the properties of elements in each subgroup. There were 9 elements in VIII group which were arranged into three triads. There were 7 horizontal rows in this table which are now called periods. Mendeleev's also left some vacant spaces in the periodic table and predicted the properties of the elements that would fill those vacant places. The predictions of Mendeleev about the properties of those elements, however, later proved to be true when those elements were discovered. Some of these elements were aca-aluminium (now gallium), aca-silicon (now germanium) etc. Mendeleev also studied properties along with the atomic mass while giving appropriate places to elements. Hence, he placed some high atomic weight elements before low atomic weight elements. E.g., Tellurium with higher atomic weight precedes iodine. In the same way, cobalt with higher atomic mass precedes nickel. Description of the Modified form of Mendeleev's periodic table is as given below:

The main characteristics of periods are:

There were only eight groups in the Mendeleev's periodic table because inert gases were unknown at that time. After their discovery, one more group was added in the periodic table consisting of inert gases. It is called zero group. Thus, the group number is nine. Eight from one to eight and one zero group. Except zero and eight group, all groups (I to VII) are divided into two subgroups A and B. Study of these groups reveals that members of a group resemble in properties to a large extent but some elements have different properties hence two subgroups were proposed in each group.

The advantages of Mendeleev's periodic table are given below:

The main disadvantages of Mendeleev's periodic table are:


Though Mendeleev's periodic table has some drawbacks it was a revolutionary work in the field of classification of the elements which opened the door for the discovery of modern periodic table .

Earlier Attempts On Classification Of Elements

Modern science world is knowing information about more than 114 elements and have a periodic table prepared by Henry Moseley which makes the study more easy. But before the appearance of the modern periodic table there was many attempts that deserve respect. This resource is a brief write up about those attempts and their main principles. This resource is help for plus one students of Kerala state syllabus as it is related to third chapter in Chemistry.

How to treat irregular periods in women in a natural way

The Periodic law and Mendeleev's Periodic Table has brought a unique development in the classification of elements. It has helped the chemist in understanding the material characteristics of the elements and it has become a guiding force for understanding the chemistry in a better way. Even based on the periodic table, scientists were able to predict the elements which are later invented based on the predictions made.

A chemist who understands the table properly can understand the whole subject of chemistry in a better way. Before Mendeleev and after Mendeleev, chemistry has developed enormously and made a way for many discoveries and it is really a revolution in the field of Chemistry. Even though there are some problems but the table is the best discovery so far for the people who want to know Chemistry in a better way.